This part is designed to be placed downstream of a promoter and prevent any Pops from the Promoter passing through this part. It will do this until an accompanying Cre Recombinase plasmid becomes activated. Once the Cre recombinase is activated the enzyme produced will permanently cut a section of DNA from the plasmid containing this part. This excised section of DNA is degraded. This short section of DNA contains stop codons and terminator sequences so once these are removed the polymerase can pass through this part and transcribe downstream genes.

The Part also contains a RFP reporter which is transcribed in the 3’-5’ direction. This means that un-activated parts will fluoresce red and activated parts will not fluoresce. This allows you to see that the part is working in your system. It also allows you to observe the efficiency of activation of the part in your system. The part runs the other way to the rest of the system to prevent any fluorescence due to external Pops passing into the device

The Cre lox system is very complex and it will not be described fully. There are multiple Lox sites which exist - we have chosen Lox sites 66 and 71. They are both placed in the forward direction on the sense strand of the DNA. This causes the DNA between the lox sites to be excised rather than reversed. Lox 66 and 71 have been mutated so that the reversed strand of DNA cannot be re-inserted by cre. Lox 66 should be upstream of Lox 71. The DNA between the Lox sites is seen as a plasmid in the cells once it has been excised however it has no origin of replication so will be quickly degraded inside the cell. 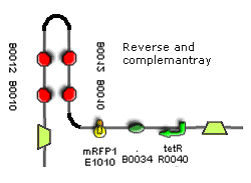 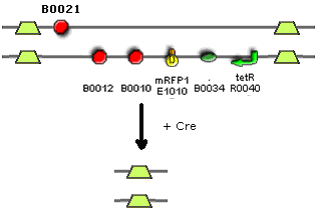 There is one further step that we need to take if we want to successfully incorporate this system into the whole system. The plasmid containing the Cre enzyme coding region will be going into the prey cell. However the prey cell will already contain the main coding plasmid, which has ampicillin resistance. Therefore to ensure that the second plasmid is taken up into the cell as well, we need to swap plasmids by ligation. Ligating into a kanamycin resistant plasmid is probably our best bet. We could do this after the device has been constructed in the ampicillin resistant plasmid.