Scoreboard: Keeping track of what we 'ave and don't 'ave

CDF ori as an insert

Transformation of Parts/ Plasmids into S1

Transformation of Lac/Tet + GFP into S1

7/3: 25 mL culture of S1 was grown for electroporation and transformation.

7/9: colonies picked and grown up in liquid culture

7/10: glycerol stocks made and samples miniprepped

Transformations/Minipreps of Parts from Registries

Alarmingly, the E1 mock transformation (no DNA, neg control) grew on the LB Carb plates. All of the Carb plates had some colonies, so we only picked from those with significantly higher numbers than the neg control. 3 colonies each from BBa_J06911 & BBa_J06912 2007 (temp sensitive LacI system) were picked and grown.

We made liquid cultures of all the successful transformations in LB Amp.

Of the products from the previous days, Q01121 (P89), P51, P52, P17, P77, and CDF appeared to have bands. Since we wanted a higher concentration of DNA, we redid all the PCRs, with the aim of cutting out the PCRs that worked. Additionally, we lowered the annealing temperature with the hope that the PCRs that didn't work would work.

After the gel extraction (standard kit protocol), the negative control (gel with no DNA) read 5.4 ng/μL and the positive control (a bright band from the ladder) was 8.3 ng/μL according to the NanoDrop.

Here is a ligation protocol (used by TA and MXH):

We attempted to digest the following plasmids (per the Master Plan sent out to the iGEM google group):

These digests were run on gels and the bands of the correct size (when present) were extracted. If indicated, we digested PCR products of the plasmid as well (we did not purify PCR product first). 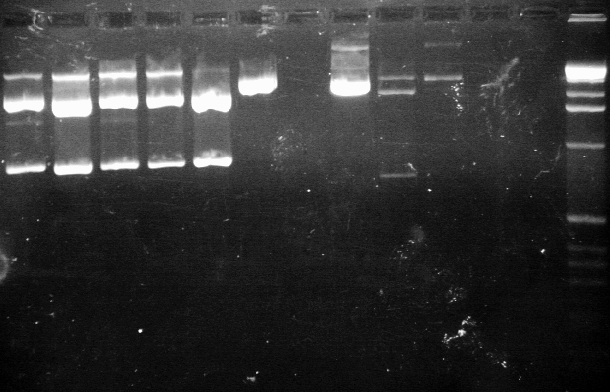 Using the PCR products from 7/11 (gel purified and extracted w/ kit), the following digests were performed:

The above was purified using the Qiagen PCR purification kit (removes DNA <40bp, so the end fragments from the PCR should be removed).

7/7/08 Ligated mtrA and p45 using standard protocol from ligation kit. In step 2 5uL of Vector DNA was added to make a 20uL dephosphorylation mix. In step 6, 4uL of the dephosphorylated Vector DNA and 4uL insert DNA were added.

We transformed the ligated plasmids (P59+63 and P58+63 on Kan, P18+45 on Amp). We also an Amp positive control of pUC19 and two mock transformations (negative controls).

Only the ligation of P18 to P45 (P74) was successful (the plate had colonies that were fluorescent). We made a glycerol stock and a LB amp culture.

Miniprep from Ligation and Glycerol Stocks (7/11/08) 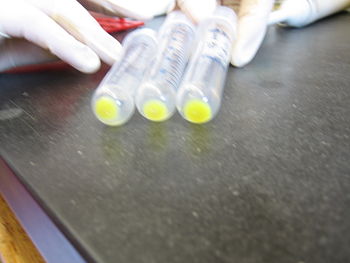 We used the standard ligation protocol to ligate P38 and P39 with P45. This will test the P38 and P39 samples that we have. P38 and P39 are the hi and low constitutive promoters; P45 is RBS + GFP + terminator. So if the colonies fluoresce, then our minipreps of P38 and P39 do contain P38 and P39.

The following were ligated, with 5μL used to transform E1:

Colony PCRs of Transformations in S1 from Last Week 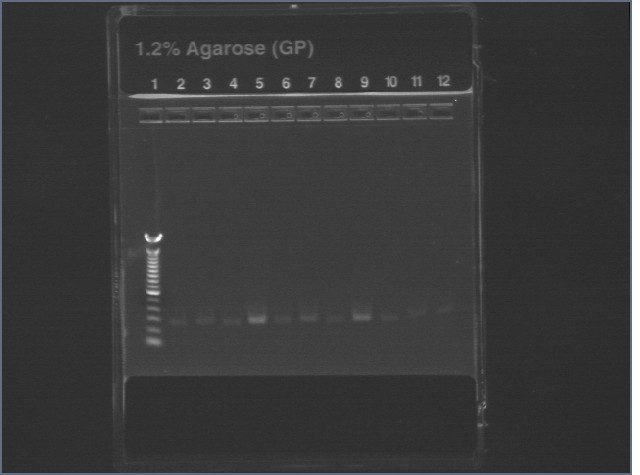 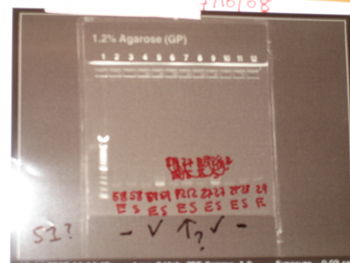 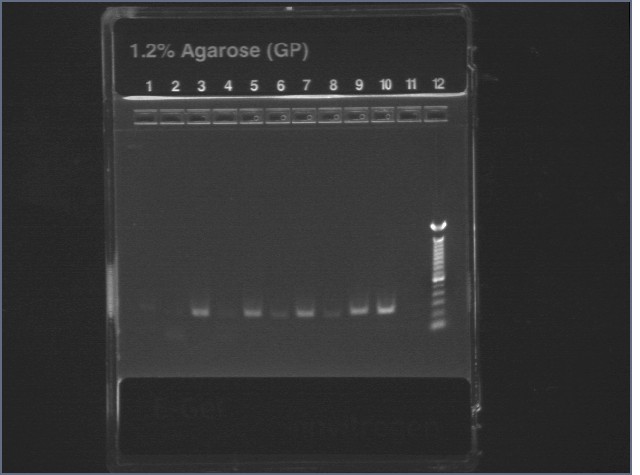 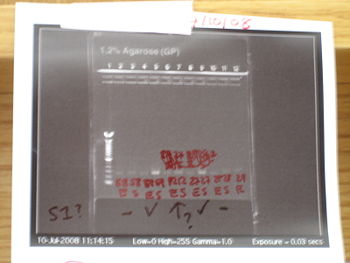