Green Fluorescent Protein (GFP) offers efficient and convenient means of visualising the dynamic process of gene expression and of obtaining readout of the current state of complex gene regulatory networks – features of major interest for synthetic biology. GFP and other fluorescent proteins are hence commonly used as reporter genes in synthetic biology. Since the initial description of GFP and its potential use for molecular biology [2], many different mutant variants of this wild type have been published, conferring altered spectral properties and/or improved fluorescence intensity [5] or folding properties [4, 5] with respect to the basic protein. Improved folding and enhanced intensity of fluorescent proteins open up many new potential applications including the secretion of proteins from Gram-positive bacteria such as Bacillus subtilis, the use and efficient folding of GFP in in-vitro gene expression systems as well the potential to target markers to extracellular spaces in eukaryotic organisms such as the cell wall space in plants. In addition, more intensely fluorescing GFP variants allow the reduction in copy number of synthetic circuits carried on plasmids in bacterial hosts, thus potentially improving the stability of those systems while the reporter (GFP) is still detectable. <br> Despite those potential applications of improved variants of GFP in synthetic biology the only GFP variant currently listed and characterised in the Registry of Standard Biological Parts is the somewhat outdated GFP mut3b [3] . <br> Contributing folding improved and intensity enhanced versions of GFP – in standard BioBrick format - to the Registry of Standard Biological Parts would thus be expected to have a range of positive effects on the efficiency with which fluorescent proteins are used in synthetic biology and on the range of applications they are employed for. <br> <br>

Hence the objectives of this project were to standardise into BioBrick format, and to characterise two of the recently reported improved GFP variants in comparison to the currently used mut3GFP and to contribute those new variants to the Registry of Standard Biological Parts. The GFP variants chosen were superfolder GFP, developed and described by Pédelacq et al (2006) [5], which was engineered for improved fluorescence in fusion proteins and P7 GFP (“superfast GFP”) which was engineered by Fisher et al (2008) [4] and selected on the basis of its property of very rapid folding. <br> <br>

mut3 GFP was obtained from the 2007 parts distribution of the Registry of Standard Biological Parts [1] as part number E0400. P7 GFP [4] plasmid DNA was a kind gift by Dr Adam C. Fisher from Cornell University, New York. Superfolder GFP [5] was created by de novo DNA synthesis (Geneart) and its codon bias was changed as a compromise for optimum expression in E. coli and B. subtilis. The full sequence is listed in the Registry of Standard Biological parts: part number <a href="http://partsregistry.org/Part:BBa_I746916">I746916</a>.

For in vivo and in vitro studies, all three GFP variants (superfolder, P7 and mut3) were cloned into 2 basic constructs residing in the same standard vector (pSB1A2):

Additionally, all GFP variants were 6-his tagged by PCR and again assembled to comply with the above schemes. The resulting new BioBricks were added to the registry of standard biological parts. <br> The table below depicts the BioBrick numbers in the parts registry for all three variants of GFP in their 6-his tagged and non tagged format driven by the pBAD and T7 promoters: <br>

All constructs were sequenced after assembly to confirm sequence identity with the GFP variants in the original papers [2,3]. Below is an overview of the mutations of P7 GFP and superfolder GFP in comparison to mut3 GFP:

Overnight cultures of E.coli BW27783 carrying the one of the GFP constructs (see table above) on pSB1A2 were diluted 1:10 into fresh LB with 100ug/ml ampicillin and grown in a 96-well plate at 37°C with shaking for 2 hours before induction with varying concentrations of L-arabinose. Fluorescence was measured throughout the duration of the experiment in 3minute intervals on a BMG FluoStar fluorescence plate reader with 485nm excitation, 520nm emission filters. 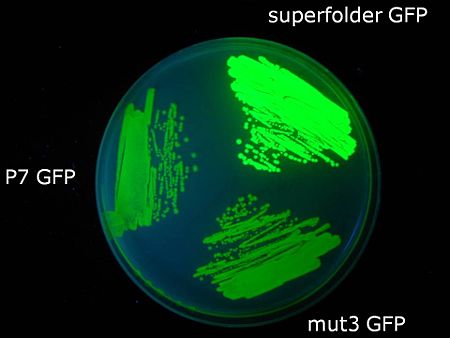 <br> <i> Figure 0: E.coli BW27783 growing on LB agar plate containing 10mM arabinose. The three streaks are expressing the GFP variant indicated in the picture driven by the pBAD promoter (see Methods for construct). Plate was illuminated with handheld UV lamp and photographed. </i> 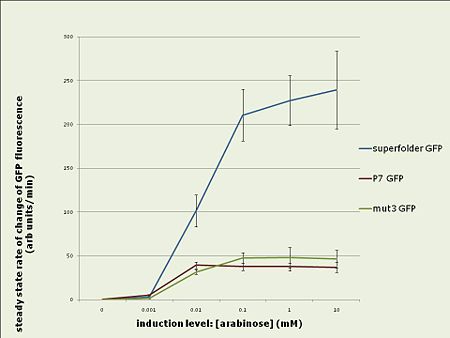 <br> <i> Figure 1: Rates of increase of in vivo GFP fluorescence 2.5 to 4hrs after induction of the pBAD promoter with different levels of arabinose. Data shown is the average of 3 experiments. </i> 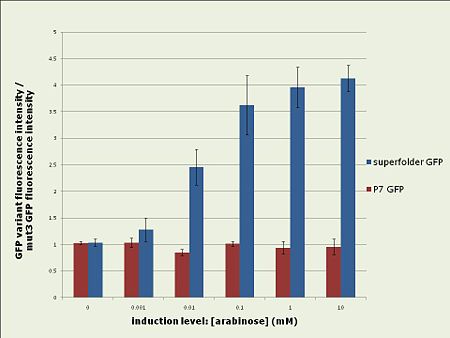 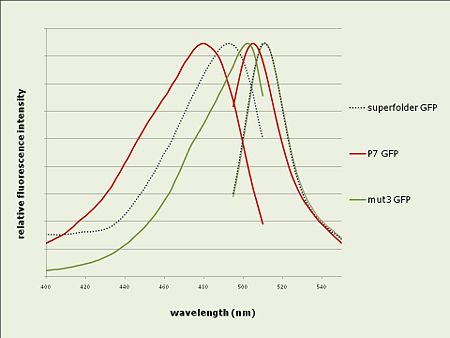 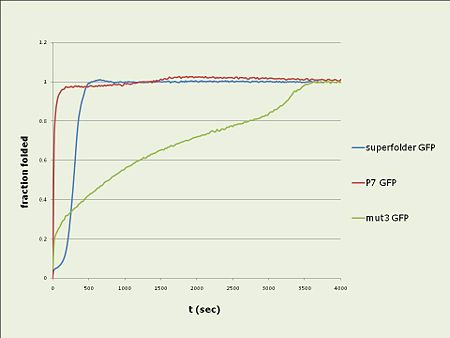 <br> <i> Figure 4: Short term in vitro refolding of 6-his purified GFP samples after complete denaturing. Data shown is the fraction folded at each time point compared to the maximally refolded sample. Data shown is the average of three experiments. </i>

<h3> P7 and superfolder GFPs are more resistant to denaturing and have stronger refolding abilities in vitro than mut3 GFP: </h3> 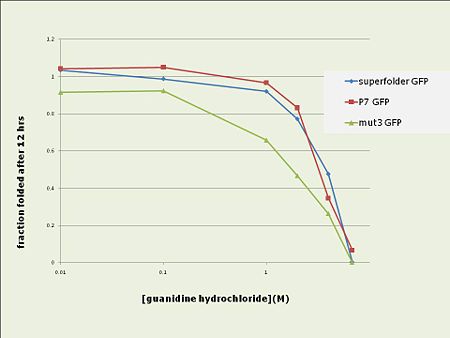 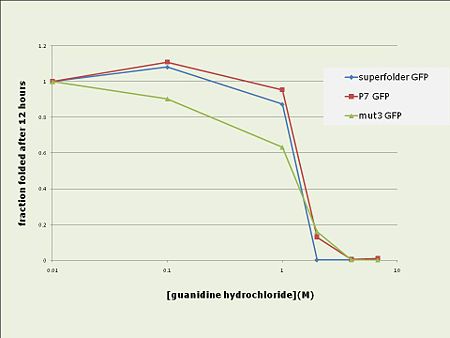 Two improved GFP variants were standardised into BioBrick format and their in vivo and in vitro properties were compared to mut3 GFP: <br> <br> Superfolder GFP represents a major improvement for in vivo GFP expression and will hence be extremely useful for synthetic biology applications: Its 4fold increased fluorescence intensity and the 3.5 fold higher speed at which it develops fluorescence in vivo are likely to be very useful features, especially with regard to the reduction of the copy number of synthetic regulatory circuits to low- or single-copy whilst still maintaining the ability to use and detect GFP as a reporter.

P7 GFP, whose in vivo properties are essentially equal to those of mut3 GFP, may be a promising and useful GFP candidate for in vitro experiments, given its properties of very fast in vitro refolding, its high resistance to denaturing and its improved ability to renature .

Both new variants were contributed to the Registry of Standard Biological Parts and are as such available for wide use in the synthetic biology community.

[1] PDF of a poster created to present the above data to a mixed audience. Includes an introductory section on BioBricks.

This undergraduate summer research project was supported by the Wellcome Trust in form of a vacation scholarship. It was conducted in the lab of Dr Jim Haseloff, Dept of Plant Sciences, University of Cambridge, UK. We wish to thank Dr Adam C. Fisher from Cornell University, New York for his kind donation of P7 GFP.