update: Trait-O-Matic now has an icon!

After realizing the difficulty of just creating new models just from data mining and analysis, having talked to the modeling group, we decided to go along a more standardized approach. Joe Torella had suggested that we manually curate models taken from the literature and somehow incorporate them into Trait-o-matic's output. This idea ended up coalescing into a vision of how this could actually be implemented:

This is the standard we are looking to use for users to upload their custom models. These values should all be commented at the top of the python file. We might add some in the future, so do not take this as a definite format yet.

There are many categories of these models that can be created, such as for example a model for pharmacogenomics of particular drugs, disease traits, descriptive traits, etc!

Right now, we envision a Trait-o-Matic output that

(II) has all the phenotypes associated with a certain more general condition (for example, height) grouped under one tab with the appropriate label (and perhaps, eventually, with a model-generated quantification)

(III) under the tab, has the same output as is currently available, plus extra: perhaps (A) a paragraph automatically extracted from appropriate literature, (B) information on the numerical output of other possible models, (C) an interface for manual curation/statistical evaluation of the current models

To accomplish these goals, we suggest the following short-term tasks:

2. Look at the databases (OMIM, snpedia, morbid map, etc.) that are stored in the mySQL databases for Trait-o-Matic, and try to think of ways (probably building on/incorporating Fil's UMLS method) for organizing them further

3. Continue to document Trait-o-Matic core (Alex should have a basic schema map done by the end of this weekend, but the core needs more documenting too)

4. Building on (2), begin to look at modifications that will need to be made in the core database-to-JSON python files, in order to integrate the new classification data we will have organized

5. Build in a quick and easy way to dump the final JSON output before it goes to the front end display (just to play around with, reroute to a model, etc.)

Just before this post I wasted a little bit of time making a dumb diagram of the Trait-o-Matic front end: 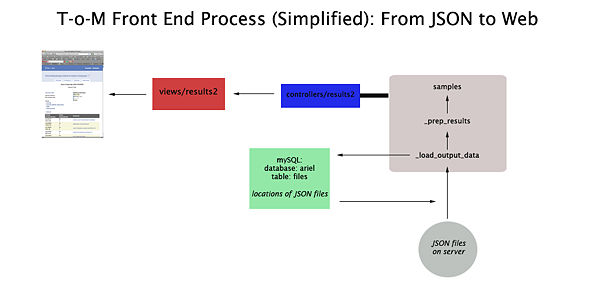 Obviously this ignores everything except the simple JSON retrieval process. Also I include my sloppy and almost as simple notes here. See my talk page for more thoughts "Alexander J. Ratner 01:25, 23 November 2009 (EST)"

--I already have MeSH parsed into a mySQL database, I am currently working on ICD-10 as a supplemental hierarchy of diseases [[3]]. As soon as this is ready the data will be applied to the classification.

http://incubator.apache.org/pdfbox/ is a Java-based PDF text extractor that we can use to extract paragraphs out from references so that we can then display them together with traits. I will show a demonstration of text extraction in class today!

1. GFF format: “Gene Feature Format” is a file format for encoding feature information (starts, splice sites, stops, motifs, exons, introns, protein domains, etc.). Claims to ‘aim for a low common denominator’ in terms of amount of genomic data represented. Format is a list of tab-separated fields, one per line, each one describing a gene feature; they are (in the following order):

a.Name of the sequence being referred to (allows for multiple genes/sequences to be referenced in one file)

b. Source of the sequence

i. Attribute (separated by semicolon separators), again based on the above std. set

j. # is for commenting, ## for certain types of meta-data.

3. FASTQ format: text based format for storing both sequence and quality scores

- contains the configuration for t-o-m, such as passwords for databases and the like

- outputs the intersection of two GFF files, with attributes taken from the first

- outputs GFF record for each entry in a Maq SNP file

- Outputs tab-separated variant information (into data/snpedia.txt) for each entry in SNPedia

- Goes through snpedia.txt and prints out the associated genotypes (found in the snp19 database)

- this controls how the results are printed on the page. The table here is sorted by Sortable.js

Ensure that your private and public keys are in your .ssh or .openssh directories. Otherwise, ssh will not know where to look for them.