"Figure 1:""A comparison between Haptotaxis and Chemotaxis [2] 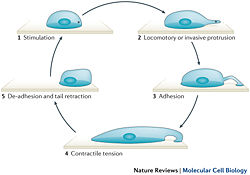 ▪1914: Substrate is important to migration (Harrison)

Today: Debate among scientists about the differences between Haptotaxis and Chemotaxis; applications of cellular process

Because this cellular process is important in the immune response, development and wound healing, it is an attractive candidate for exploitation in regenerative medicine. [3] For these reasons, there have been a surge of research in the attempt at creating cellular gradients to direct the process of tissue development [3, 4, 5, 6, 7, 8, 9] .

There have been several different developments among researchers in the use of Haptotaxis and its properties in tissue engineering and regenerative medicine efforts. Notably, the use of stem cells seeded certain grafts to induce tissue and differentiation proliferation [5] In these studies, there is an overarching goal to create tissue derived from human cells to be incorporated in vivo. These studies can affect a vast range of people, including those who with bone deficiencies and tissue deformations and/or deficiencies. [5].

As an example, there has been development in the creation of a human mesenchymal stem cell (hMSC) seeded polymer bone grafts. The grafts are designed to be porous to allow access to certain growth factors. In doing so, a chemical gradient is created, in which draws certain cells to certain areas to proliferate and differentiate. Further, stiff, rod-like fibers are incorporated into the graft to act as guides for the cell. By doing so, the hMSCs can differentiate into osteoblasts, allowing for incorporation in vivo [7].

There has also been work in using microfluids in the creation of a chemical gradient to exploit Haptotaxic properties [10]. By the creation of a gradient, cellular migration - along with differentiation and proliferation - can be studied and exploited in the use of regenerative medicine and tissue engineering.

As an example, one group varied adhesive ligands through a 3D collagen gel to create a Haptotaxis gradient. By planting a chick embryo dorsal root ganglion into the scaffold, the growth of neural cells was measured. The results suggested that the incorporation of gradients improved regeneration of axons -- suggesting the growth of neural tissue.

Interestingly, tumor cells possess strong Haptotaxis properties. Tumor cells use the properties of Haptotaxis to metastasize and spread, furthering their effects on the body. Though not much is known about the process, it has been hypothesized that vibronectin, a glycoprotein of which promotes cellular spreading, helps create a gradient of which assists tumor cells mestastize. [4] However, work in understanding the process of cellular migration through Haptotaxis could lead to a greater understanding of cancer metastasis.

Work in tissue engineering and regenerative medicine by using Haptotaxis as a vehicle to create specific tissue regeneration is promising. With many different types of biocompatible grafts and the use of stem cell differentiation, and with promising results, it would seem in vivo generation of tissue might happen. However, there are pitfalls to this approach - first of which, specific stem cell differentiation is difficult and can often lead to different desired products. Further, the creation and maintenance of a chemical gradient is difficult in vivo. Additionally, the 3D microenvironment is incredibly influential to the properties of Haptotaxis and can be difficult to replicate [6]. However, technology is advancing in the creation of 3D hydrogels. Lastly, the use of people’s cells is expensive and difficult to procure.

[3]Basan, Markus, et al. "Alignment of cellular motility forces with tissue flow as a mechanism for efficient wound healing." Proceedings of the National Academy of Sciences 110.7 (2013): 2452-2459.