Nuclear extract preparation is a useful procedure to enrich nuclear proteins for various techniques including EMSA and ChIP studies. There are two separate protocols below; 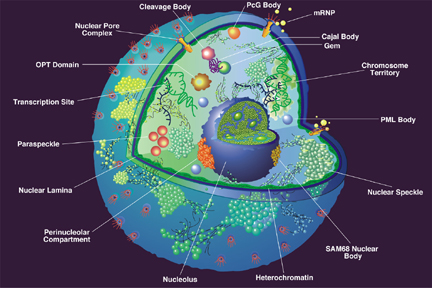 The nucleus of a eukaryotic cell

I. Homogenize cells or tissue 1. Wash commercially available HeLa cells (30g) or minced in 3mm pieces fresh liver(15-20g) from staining with homogenizing buffer (10ml) and transfer it to 100ml beaker 2. Add to the beaker another 25ml of the buffer and split the content in half (2x15ml) 3. Homogenize each portion twice, 10 strokes (“up” and “down”) each with a teflon pestle. Between strokes, cool homogenizer on ice. Try to maintain temperature close to +4C

III. Lyse nuclei 1. Invert tubes and keep them on ice for 10min 2. Resuspend pellets in nuclear lysis buffer (5ml/pellet). Perform one stroke with Dounce homogenizer 3 Add lysis buffer to 40ml and 2ml of 4M ammonium sulfate and agitate for 30-60min at +4C

Buffers used for extract preparation are designated as follows:

Hela cells were grown in spinner flasks at 37oC in Joklik’s MEM containing 5% calf serum. They were frown to 4 to 6 x 105 cells per ml prior to harvesting for extract preparation.

HeLa cells were harvested from cell culture media by centrifugation (at room temperature) for 10 min at 2000 rpm in a Sorvall HG4L rotor. Pelleted cells were then suspended in five volumes of 4oC phosphate buffered saline and collected by centrifugation as detailed above; subsequent steps were performed at 4oC.

The cells were suspended in five packed cell pellet volumes of buffer A and allowed to stand for 10 min.

The cells were collected by centrifugation as before and suspended in two packed cell pellet volumes (volume prior to the initial wash with buffer A) of buffer A and lysed by 10 strokes of a Kontes all glass Dounce homogenizer (B type pestle).

The homogenate was checked microscopically for cell lysis and centrifuged for 10 min at 2000 rpm in a Sorvall HG4L rotor to pellet nuclei.

The nuclear extract was prepared as follows. The pellet obtained from the low speed centrifugation of the homogenate was subjected to a second centrifugation for 20 min at 25,000 gav (Sorvall SS34 rotor), to remove residual cytoplasmic material and this pellet was designated as crude nuclei.

These crude nuclei were resuspended in 3 ml of buffer C per 109 cells with a Kontes all glass Dounce homogenizer (10 strokes with a type B pestle). The resulting suspension was stirred gently with a magnetic stirring bar for 30 min and then centrifuged for 30 min at 25,000 gav (Sorvall SS34 rotor).

The resulting clear supernatant was dialyzed against 50 volumes of buffer D for five hours. The dialysate was centrifuged at 25,000 gav (Sorvall SS34 rotor) for 20 min and the resulting precipitate discarded.

The supernatant, designated the nuclear extract, was frozen as aliquots in liquid nitrogen and stored at -80oC.

The protein concentration was usually 6-8 mg/ml and 15-20 mg of protein were obtained from 109 cells.