Graft vs. Host Disease (GVHD) is a medical problem after allogeneic hematopoietic cell transplantion (HCT) including transplants of bone marrow, stem cells, or other organ tissue. The donated tissue’s (graft) white blood cells recognize the recipient's (host) body as foreign. Consequently, the immunocompetent white blood cells within the graft attack the host body’s cells, causing systematic tissue destruction, organ failure, and death in severe cases. There are more than 25,000 allogeneic transplants done per year, and projected to increase by more than twice within the next 5 years [1]. Transplants between unrelated people are steadily increasing to about 40% in 2013. GVHD occurs in about 30% in occurrence in transplants between related people, and up to 80% between unrelated people. 20% of the patients with GVHD are staying on prolonged treatment with immunosuppressant, with a wide variety of side effects. Severity are measured in four stages of increasing mortality, ranging from 90% survival in Stage I to 5% survival in Stage IV [2]. 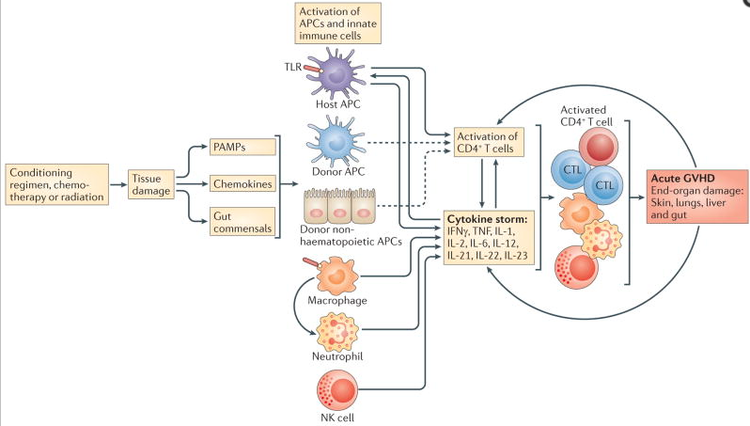 There are two main types of GVHD identified in patients – acute and chronic GVHD. Until recently, these types of GVHD were characterized as:

With these diagnostic criteria, chronic GVHD included any symptoms typical of GVHD that occurred more than 100 days after the transplant took place. The NIH consensus has now recognized two primary categories of GVHD with criteria distinct from one another, each with two subcategories. The overarching acute GVHD category includes classic acute GVHD as well as recurrent, persistent, or late-onset acute GVHD which manifests itself more than 100 days post-transplantation. The overarching chronic GVHD category includes classical chronic GVHD (described by symptoms exclusive to chronic GVHD only) as well as an “overlap syndrome,” which indicates there are also some characteristics of acute GvHD [4]. 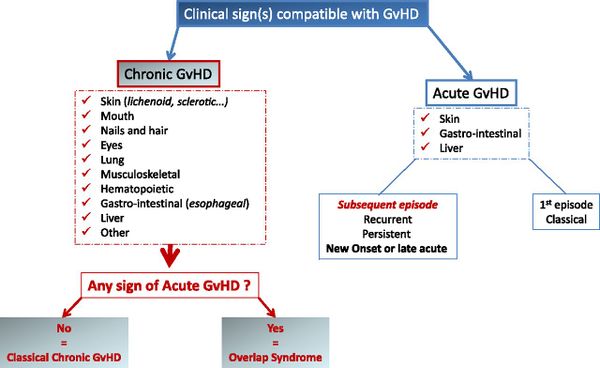 Diagnostic criteria for GVHD according to the NIH consensus [4]

The general mechanism of GVHD pathology can be summarized in three sequential phases:

Host tissue damages caused by a wide variety of reasons, such as diseases, chemotherapy (as in the case of leukemia or other cancer), or other underlying conditions, respond by unleashing a variety of signaling molecules, including proinflammatory cytokines, chemokines, and adhesion molecules for antibody binding. Measured concentration of TNF-α seems to directly correlate to the likelihood of GVHD development. GI tract condition is also found to be essential for GVHD propagation, as damages to GI surface can release pathogen-associated molecular pattern (PAMP) from microbial flora, and accelerates cytokine release. Furthermore, previous recent exposure to viral infection, which leaves behind viral PAMPs, will also trigger release various signaling molecules, as indicated by a study involving increased GVHD associated with cytomegalovirus infection [3-5].

In response to stimulation from increased cytokine, donor T cells proliferates and differentiates into a variety of cells, such as cytotoxic T lymphocytes and natural killer cells. These activated immune cells goes through a cascade of intracellular pathways that resulted in transcription of large volume of cytokines and their respective receptors, such as IFN-γ, IL-2 and TNF-α. These cytokine are described to increase sensitivity of monocytes and macrophages, and appropriately accelerate their immune response activity. Various suppressive cytokines, such as IL-10 and TGF-β, has been theorize to be effective against onset of GVHD [4-5].

Additional tissue damage can trigger even more cytokine release, further stimulating additional T cell activation and proliferation. Mechanism includes: perforin, which causes nanoscale pores to form on cell membranes and cause leakage of cellular material and ion concentration upset, and granzyme, which causes apoptosis. Chemokine directs T cells to target organ via inflammation response. Worst case scenario is cytokine storm, where the immune system goes into overdrive into attacking itself due to the positive feedback loop between immune activity and cytokine signaling [1,5]. 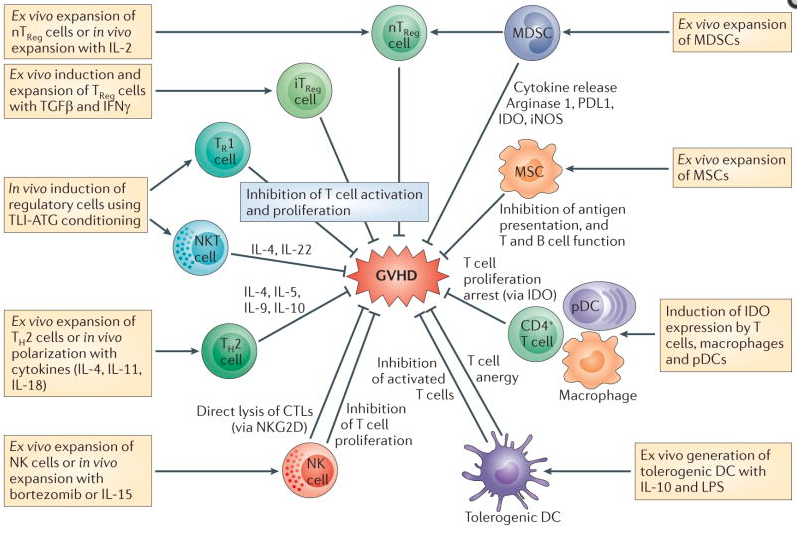 The pathology of chronic GVHD was poorly understood until recent years. Recent advances have shown that the immune pathology of chronic GVHD is highly complex, involving both donor T cells and donor B cells, as well as other cells. In regards to two target organs, damage to thymic epithelial cells (TECs) and bone marrow microenvironment are especially significant in the later development of chronic GVHD. Alloreactive T cells damage TECs which leads to a decrease in generation of natural regulatory T cells and release of self-reactive T cells. Damage to the bone marrow microenvironment is a possible explanation for the irregular B cell homeostasis. The role of APCs and the interaction between donor B and T cells in chronic GVDH is still not very well understood [14].

After transplantation, T cells in the graft perceive the host tissues as foreign, which then produces an immune response, resulting in the graft’s T cells attacking the transplant recipient’s tissues. This induces the T cells to produce an excess of cytokines. Cytokines expressed by the activated donor T cells are implicated by numerous studies to be responsible for triggering immune pathways responsible for GVHD pathology. Key cytokines produced include Tumor Necrosis Factor (TNF-α), Interleukin 10 (IL-10), and Interferon-γ (IFN-γ). Proteins that are responsible for innate immunity against various infections, such as Keratin 18 receptor, are also found to be responsible. Many different kinds of host antigens can trigger GVHD, including human leukocyte antigens (HLA). GVHD is triggered when donor T cells register HLA in the recipient as different from its own. Odds and severity of GVHD increase as differences of HLA between recipient and donor increase. Furthermore, differences in minor histocompatibility antigens, which are receptors expressed in almost every organ and hematopoietic cell, can trigger immune response from donor T cells. Therefore, even HLA-identical transplants can induce graft-versus-host-disease. [1, 3] The antigens that cause the most graft loss are HLA-DR (in the first six months), HLA-B (in the first two years), and HLA-A (long term survival) [13]. 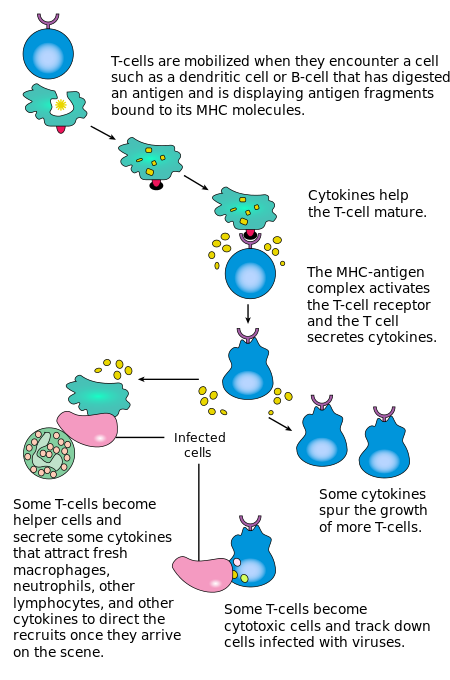 Mechanism of T cells in the immune system

Most current treatments aim to resolve aGVHD through a combination of the strategies described above, while there are few options available for cGVHD other than chronic application of immunosuppressants [2,5]. A wide range of therapeutics is available for targeting various stages of GVHD mechanism. Various steroids have been shown to significantly lower incidence of GVHD symptoms, attributed to its properties of lymphocyte suppression and anti-inflammatory effects. Steroid treatments have improved survival rate in severe GVHD patient group to up to 50%. Alemtuzumab, a monoclonal antibody therapeutic, binds to CD52 on the surface of lymphocytes, which is then targeted for destruction. This eliminates a control number of immunocompetent cells from the body, and resulting in significantly lower GVHD for both aGVHD and cGVHD. A new drug, named Etanercept, impedes immune signaling pathway by blocking TNF-α and eliminating cytokine effects on T cell activation. Phase II trial indicate a 70% resolution among patient group with aGVHD within 1 month of application [2, 6].

Immunosuppressant drugs function by inhibiting one or more steps in a normal immune response. They provide a “blanket” approach where immune response and signaling from both host and donor is shut down. The most important aspect of immunosuppressant drugs for treatment of GVHD is that proliferation of T cells is reduced. For example, calcineurin, an enzyme essential for T cell activation, can be suppressed with cyclosporine to prevent and alleviate tissue destruction. Patients have to contend with a host of side effects, including significantly increased risk to all types of infection, water retention, weight gain, confusion, muscle weakness, osteoporosis, and avascular necrosis [2,5]. The first-line treatment generally used is IV or oral corticosteroids [15]. Glucocorticoids, such as prednisone, are a type of corticosteroid often used for treatment and anti-inflammatory effects. Glucocorticoids decrease the number of lymphocytes and monocytes in the body, including T cells and B cells, because they inhibit nuclear factor kappa-light-chain-enhancer of activated B cells (NF-κB). NF-κB is a transcription factor that is responsible for synthesizing many mediators (i.e. cytokines) and proteins that promote immune response; thus, inhibiting NF-κB hinders the immune system's ability to respond [10]. Glucocorticoids also inhibit genes that code for certain cytokines, including IL-1, IL-2, IL-3, IL-4, IL-5, IL-6, IL-8, and IFN-γ. Most important of these is IL-2. Reduced production of cytokines decreases T cell proliferation [11]. In patients that are steroid-resistant, other methods of treatment are used. In this case, the foundation of most GVHD treatment regimens includes a calcineurin inhibitor (such as cyclosporine, mentioned above) plus methotrexate (MTX) or mycophenylate mofetil (MMF) [15].

Since donor T cells are irreplaceable in initialing the sequence of events leading up to GVHD, removal of T cells from graft tissues might achieve alleviation/prevention of host tissue damages. This procedure is referred to as TCD, where donor T cells are deliberately removed from graft tissues to eliminate response from host-released cytokine. Various strategies of removing T cells have been suggested, including 1.) negative selection of T cells ex vivo, 2.) positive selection of CD34+ stem cells ex vivo, and 3.) anti-T cell antibodies in vivo. A small remainder of T cells remain in the graft tissues.

Results from clinical trials indicated that while the patients group experienced drastic reduction in GVHD after bone marrow transplant, survival rate is almost equal to control group due to offset from prevalent graft failures/rejection, increased susceptibility to infections, various lymphoproliferative disorders, and release of malignancy. This is attributed to donor T cells are also responsible for leukemia cancer cell destruction after grafting, referred to as graft-vs.-tumor effect. Selective TCD has been employed in a number of trials, where CD-8 subsets are specifically targeted for removal based on their signal pathway toward aGVHD. Results remain inconclusive on the benefit of selective TCD, however [2,7].

This treatment aims to eliminate controlled number of immunocompetent cells within host, in an attempt to control immune pathway responsible for GVHD. Inflammatory T cells are collected by apheresis and are mixed with DNA-intercalating agent 8-methoxypsoralen. The collection is exposed to UV light, where the white blood cells suffer from irreparable DNA damage and undergo apoptosis. This eliminates the cells primarily responsible for triggering GVHD, and reduces inflammatory effect. This also increases ratio between regulatory T cells to inflammatory T cells, affording greater control of cytokine signaling and preventing cytokine storm trigger. This has resulted in high resolution rate among a large majority of aGVHD patient, with a 50% long term survival rate. While no side effects were mentioned in the article, it's very likely that patient will suffer from increased susceptibility from infection as a side effect [2].

GVHD remains a challenge for proliferating the usage of tissue/stem cell grafts as treatment for a wide variety of cancers and autoimmune disorders. The exact pathology and mechanism, although shown to be involving donor T cell activation and signaling, are still not known completely. Traditional treatment for GVHD, especially for cGVHD, often comes with significant drawbacks, such as debilitating side effects, immunodeficiency, or graft rejection. Current research involves further understanding various stages of T cell signaling in GVHD, and coming up with new targets for therapeutic treatment. A wide array of new therapy options, such as cellular component therapy, are also entering clinical trial recently [1,2].