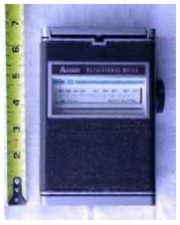 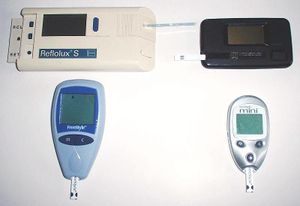 The blood glucose meter is the most common and one of the oldest methods of blood glucose monitoring. The first blood glucose meter was patented in 1971 by Anton H. Clemens and sold by the company Ames under the name, the Ames Reflectance Meter (AMR) [1]. The Ames Reflectance Meter was a heavy piece of equipment, being around three pounds and had a tendency to break down, specifically in regards to the battery leaking. The Ames Reflectance Meter was followed up the following year with the Ames Eyetone Meter (AER) [1], which was a lighter and more effective model. Both of these two original models utilized the Dextrostix, which was also created by Ames. Both of these meters by Ames saw extended use throughout doctor’s offices, but did not see much home use because of the price, $600 for the AMR and $300 for the AER, and the various problems each had [3]. It was not until the 1980’s when glucose meters truly became common in the home market. During this period both the Glucometer and the Accuchek were produced, both of which are the basis for the modern blood glucose meter [2]. The device had three main parts, the lancet, the meter itself, and the test strip. The lancet is fairly simply in design, with a double edged needle-like blade with a plastic handle and a protective plastic cap. Test strips are about one inch in length and contain a glucose oxidase coating which allows the system to read the glucose levels in the blood. These meters are fairly easy to use and understand. The steps involved are:

2. Place a clean test strip in the meter.

3. Sterilize area of finger being used with alcohol wipe.

4. Prick sterilized area with a new lancet and safely dispose.

5. Gently put pressure on finger to produce blood and place on strip.

6. Wait for reading then safely dispose of test strip.

Research is currently underway on a continuous closed-loop drug delivery system that can be implanted under the skin. The idea behind this system is to be able to read the blood glucose levels and then automatically dispense insulin into the body without human assistance. They are small, approximately 1 inch in length and less than 0.25 inch in diameter. These systems are in the preliminary research stage involving animal testing and have not yet shown the ability to be viable for more than a few days. [7]