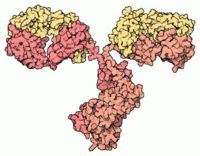 You are hot in pursuit of an interesting protein but there are no commercial antibodies or they are bad. It's time to think about raising your own antibodies against the protein. It will be a time and money consuming undertaking but once you developed a specific antibody or set of antibodies, you will be in a unique position to generate interesting data.

Common animals for raising antibodies include rabbit, goat, mouse (required for monoclonal antibodies), and even llamas [1]. The choice depends on which antibodies will be used in conjunction with antibody to be generated and which type of antibody is desired.

Type of antigen to use 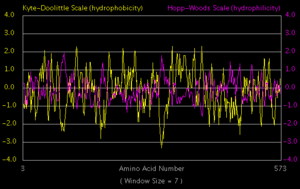 Example of a protein's hydrophobicity according to 2 different scales. Made with R. Bowen's tool.

If you decide to raise antibodies against a peptide or several peptides from the target protein, you will be faced with the question which region to choose. The gist is, you want to pick a 15-20 residue peptide that is on the surface of the protein, i.e. has a high hydrophilicity. Another common approach is to pick sequences from the ends of the protein, since they are typically exposed. Avoid cysteines if possible, since peptides will often be coupled via Cys residues to carriers and since disulphide bridges alter the shape and thus the recognition by antibodies. Still, peptide selection is trial and error.

Tools attempting prediction of immunogenic peptides given the protein sequence. Both are based on Kolaskar and Tongaonkar "A semi-empirical method for prediction of antigenic determinants on protein antigens." FEBS Letters 1990 (PMID 1702393). The estimated accuracy of prediction is 3 in 4 peptides or 75%.

A small peptide is often not enough to elicit sufficient antibody production. Several methods, also in combination, can be used to stimulated the immune system.