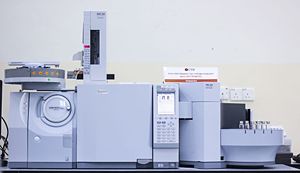 Figure 1 A high performance gas chromatography machine (center) that is used in conjunction with a mass spectrometer (left) [3]. 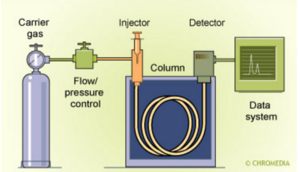 Gas chromatography can be broken down into a flow sheet diagram like in Figure 2. Gas chromatography uses a gas mobile phase and a liquid stationary phase for separation. The gas mobile phase is made up of a carrier gas, usually an inert gas like hydrogen, and the sample. The sample at is injected into a vessel where it is turned into a volatile state using heat to be carried through the machine. Once the sample is ready, it is opened to the carrier gas and sent through the column through the help of pneumatic valves. Once the sample is carried into the column, it is allowed to interact with the stationary phase through different molecular interactions. In the column, the sample is broken down into its components to be analyzed. The analyzer instrument in the system detects the chemical properties of the sample and generates an electronic signal to be read. The electronic signal is then converted into a physical graph called a chromatogram for interpretation [4].

Figure 3 The inside of a GC column detailing the mobile (flow) phase and the stationary phase [6].

Components in the flow are traditionally eluted in order of descending vapor pressure. Therefore, the molecules that are usually seen in the gaseous phase are seen first on the chromatograms, followed by the heavier components of the analyzed mixture. To actively change the elution of gas chromatography, the stationary phase shown in Figure 3 can be modified. Increasing the thickness will allow for more gases to be analyzed but with decreased resolution. Decreasing the thickness will increase resolution but at the expense of retention time. The temperature and pressure of the system can be changed to get different results, where increasing temperature of the column or pressure of the sample can decrease the retention time but greatly increase resolution. By modifying equipment conditions, gas chromatography can be used in a variety of analytic work [6].

The analysis of chromatography starts at the molecular scale, looking at the separation of molecules in the mobile and stationary phases. The value that describes this partition between the two phases is called the retention value (Rf) [2].

Chromatography runs are analyzed through a plot of detector signal versus time they produce called a chromatogram. The different components can be seen as peaks in the graph. The separation between two peaks, or components of a mixture, can be defined as the resolution [6]. 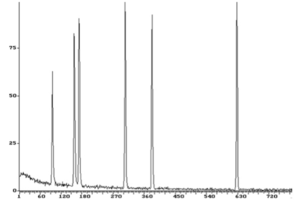 Figure 4 An example of what a chromatograph would look like plotted by time [4].

Where Δtr is the difference in time between the two peaks and wav is the width of the peak in units of time. Area under the peak can generally tell how much of a compound or molecule is in a sample solution. Figure 4 shows what a typical GC chromatograph would look like. To determine which peak corresponds to which compound, a known sample can be run through the system as reference or a standard from literature or industry can be used to best analyze the results [6].

Medicine Gas chromatography is a valuable resource to the medical field due to its quick and reliable analysis. By developing sample preparation and validation techniques, biological samples can be tested for drugs and proteins for medical testing. It was found in a 2004 study, that gas chromatography, in conjunction with mass spectroscopy, can determine concentrations of lidocaine, prilocaine, and other drugs. This sampling of blood can be done in just one minute, providing quick results to patients and doctors [7].

Pharmaceuticals Uses for gas chromatography in pharmaceuticals happens in not only development, but also in post market screening. Due to regulations, drugs need to be extremely pure with consistent properties. Using gas chromatography to analyze drugs product solutions when developing industrial purification process is important due to its quick and accurate analysis. The faster the properties of a drug product can be determined, the quicker a company can bring a drug to market [4].

Pharmaceutical companies also have to do research into how effective their products are doing. Testing for efficacy can include urine drug screening of patients on different drugs to see how its working. Gas chromatography can be used to find drug fragments or different biological indicators to best determine the drugs true effect on on patients [4].

Food Characterization of food molecules is critical for food companies as so many tight regulations. Analyzing food mixtures for quality and consistent is important for company image. Unilever research and development, has looked into oil compositions using gas chromatography. Oil and fats are usually not made up of a single molecule but a collection of many different variations of similar molecules. It is vital for companies to know how much of different types of oils and fats so the contents can be labeled on the products mandated by the regulatory agencies. Gas chromatography is used as a quick and effective analysis of different types of food [8].

Petroleum Due to the large variations in chemicals in petroleum in diesel, it is commonly seen for product validation and characterization. Octane numbers for gasoline are determined through the composition of gas. Providing as close to real time data on the composition of affluent gas streams of a refinery are key to providing reliable products to the consumers. Due to the quick characterization of gas chromatography, it is one of the most popular analysis techniques used in the petroleum industry [4].

[8] Janssen, Hans-Gerd, Herrald Steenbergen, and Sjaak De Koning. "The Role of Comprehensive Chromatography in the Characterization of Edible Oils and Fats." European Journal of Lipid Science and Technology 111.12 (2009): 1171-184. Wiley.