Research in my laboratory has a long standing interest in the function of Vitreoscilla hemoglobin (VHb), the first prokaryotic hemoglobin. The cloning of the VHB gene (vgb) in diverse organisms and its potential in metabolic engineering using a combination of techniques spanning biochemistry, genetics and molecular biology are the central themes of our study. Our overreaching goal is to shed some light on the function of VHb in its native host and the use of this highly efficient metabolic modulator in production of some industrially important microbial products whose genes are regulated by oxygen. “Asparaginase”, an enzyme used in cancer chemotherapy and “dopa” and “dopamine”, drugs used in Alzheimer's and Parkinson diseases, are the main products under investigation. One of the recent endeavors of our laboratory is to understand the role of mTOR signal complex on the “aerobic glycolysis of cancer cells” also known as Warburg effect, one of the 10 hallmarks of all cancers.

The Vitreoscilla hemoglobin (commonly abbreviated as VHb) was first discovered by Dale A. Webster in 1986 (1). However, Dale (latter to be my co-advisor together with Benjamin C. Stark, both at IIT, Chicago) originaly discovered it in 1966 (2) and given its prevalent presence in the cytoplasm but not in the membrane fraction, he named it as "the soluble form of the cytochrome bo", the terminal oxidase of bacterial respiratory chain.

I had the privilege to be one of the firsts to study the VHb and its gene (vgb) with Dale and Ben. Ben has also been known for his discovery of "catlytic RNA" during his postdoc study at Yale University, securing the Nobel Prize in Chemistry in 1989 for his advisor Sydney Altman. Having the opportunity to work with such high-caliber scientists was the most revarding part of my life with science. Robert M. Roth, then the chairman of the Biology Department, was another mentor whom I liked how he orchestrated his teaching with an explicit Brooklyn accent. Thank to all three for believing in me, a naive Turkish native, to be their TA for their courses (Advanced Biochemistry by Dale, Molecular Cell Biology by Ben, and Microbial Genetics and Genetic Engineering by Bob).

For sometime, the hemoglobins were considered to be the proteins of only eukaryotic origin. The main reason for this view is that, most eukaryotic organisms (with the exeption of the single celled ones) are multicellular and the free diffusion of oxygen into cells deep in the thick tissues and organs would not be possible without a suitable carrier (i.e. hemoglobin). Now, we know that hemoglobins exisit virtually in all kingdoms of life. But, what role such proteins may play in free living single cells, such as bacteria, which acquire oxygen from the environment readily through passive diffusion. Although, this is a question of ongoing debate, we now also know that not only do these ubiquitous protiens transport the oxygen between tissues, the known function of hemoglobins, but also they play other roles ranging from intracellular oxygen transport to catalysis of redox reactions.

Aerobic (oxygen using) organisms started to dominate the life on earth about 3 billion years ago, as the anoxic (oxgen-free) atmosphere become more and more oxic (oxygenated) with the advent of photosynthesis about 4 billion years ago. With some minor exeptions (e.g., anerobic bacteria), today life on earth in all levels, as we know it, is oxygen dependent and it is no surprise that many genes (if not all) in all these life forms from bacteria to human are directly or inderectly regulated by oxygen. Moreover, oxygen is the final electron acceptor in the respiratory chain which is coupled to oxidative phosphorylation through which all organisms generate about 90 % of thier energy (i.e., ATP). So without this gas, i.e., oxygen, life as a whole would be succumed to death. 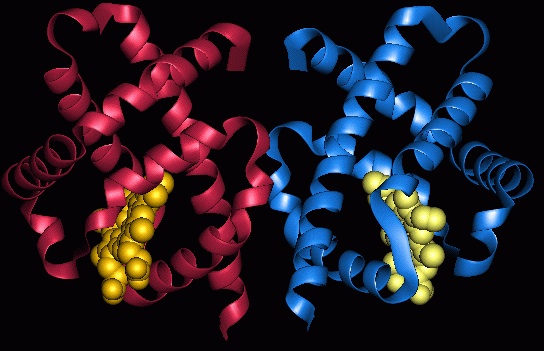 In multicellular organsims with bulky bodies, oxygen transfer into the cells residing far from perifery would be a problem if not solved by a specilized carrier. Because, oxyen is easly disolved in cellular and extracellular milieu where many oxygen hungry molecules or reactions can readly consume it, hindering its further transfer. Life solved this problem by creating hemoglobins and veins. The tracks, that are veins, provide blood cells (i.e. erythrocytes) which carry oxygen loaded hemoglobin to their destination all over the body (when there is no gain to oxygen, ther is pain!). With its highly efficient oxyen-carbon dioxyde affinity kinetics, hemoglobin relaeses more oxygen to regions where there is much need (low oxygen, high carbondioxide regions).

A bacterium is both an organism and also a cell. It is not in tissue form and does not have extensive intracellular structures (i.e., organeles). As for the cells in organisms, oxygen is easly diffuesed through its membrane and the final destinations are not that far when its size is considered (~1 x 2 µm). So, why invest so much energy to synthesize a 146 amino asit long hemoglobin protein (who knows how many molecules of it).

The term "metabolic engineering" was first coined by late James E. Bailey (then at Caltech) and Gregory Stephanopoulos (Massachusetts Institute of Technology (MIT)) in 1991 in the same issue of the journal Science (3,4). Prof. Bailey was also a pioneer in VHb studies (and his group was a rival of our laboratory at IIT) and Prof. Stephanopoulos is the editor-in-chief of the journal Metabolic Engineering.

The main focus of [The GECKIL Genetic Engineering Laboratory] involves isolation, cloning, and regulation of bacterial genes expressing products of high industrial importance. An anticancer enzyme, L-asparaginase, produced only by certain bacteria and L-dopa and dopamine, the drugs used in Alzheimer’s and Parkinson diseases are the main products under the investigation. The laboratory has also a long standing interest in Vitreoscilla hemoglobin (VHb), the first bacterial hemoglobin. The emphasis is to understand how the presence of this protein in heterologoues bacteria affects the physiological and biochemical characteristics at the molecular level. Furthermore, the up-regulation of Vitreoscilla hemoglobin gene (vgb) under microaerobic conditions make this protein a highly suitable agent for bioprocesses requiring a critical level of oxygen. As the production of L-asparaginase, L-dopa, and dopamine are highly regulated by the availability of oxygen, the application of the VHb in their production may prove advantageous.
In this endevaour, our studies showed that in certain heterologoues bacteria (bacteria which do not have the vgb gene naturally) VHb causes almost an order of magnitude (i.e., 10-fold) higher oxygen uptake and utlization rate than the vgb- host strains, resulting severe metabolic perturbations and pysiological effects (e.g., cell growth, increased viabilty in solvent containing growth media)5-11. 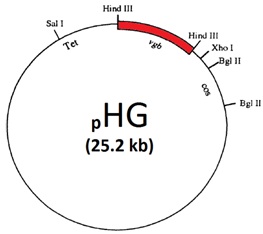 RESEARCH IN OUR LABORATORY 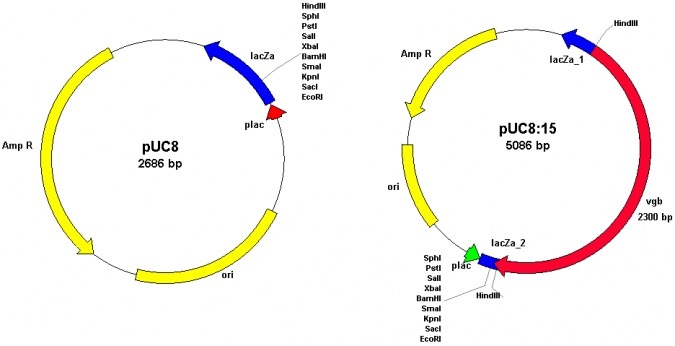