On construction versus creation

The use of the word "creation" in reference to the living artifacts that we produce via biological engineering is wrong. Creation implies an act that is based on some combination of perfect knowledge, unlimited power, and infinite resources. Gods create. Engineers on the other hand, from structural to electrical to biological, are always constrained by an imperfect understanding of what we are working with, a budget (i.e., finite resources), and limited power. As a result, engineers construct. The art of engineering involves learning how to reliably construct useful artifacts despite our limits.

-i bottles of beer

Brenner has something to say (has to say something?)

(When) will the science of molecular genetics and biology end?

Q. Is the science of biology keeping pace (via our discoveries and advances) with the "invention" of new biology in nature? In other words, will we (biologists) ever finish?

A. As a very rough estimate, to start, only consider DNA sequence information and the rate of encoding of new information into DNA via evolutionary processes. Then, compare this number to existing and expected DNA sequencing capacity.

Now, let's presume that there are 100 sequencing centers like the current TIGR/JCVI center, each capable of sequencing ~5E9 bp per month, which leads to 5E11 bp DNA sequence per month per Earth (this is likely an overestimate of today's sequencing capacity. At current rates it would take ~1E24 months (1E23 years) to sequence all the DNA on the planet. But, note that sequencing capacity double roughly once every year. So, in about 80 years (IFF current trends continue), we should have enough sequencing capacity to read all the DNA on the planet (in a month's time). But, note that there are many obvious feedbacks that would keep this from happening (e.g., raw materials needed to perform sequencing; could be avoided with a change in technology).

In the days when Sussman was a novice, Minsky once came to him as he sat hacking at the PDP-6.
"What are you doing?", asked Minsky.
"I am training a randomly wired neural net to play Tic-Tac-Toe" Sussman replied.
"Why is the net wired randomly?", asked Minsky.
"I do not want it to have any preconceptions of how to play", Sussman said.
Minsky then shut his eyes.
"Why do you close your eyes?", Sussman asked his teacher.
"So that the room will be empty."
At that moment, Sussman was enlightened.

Standard biological parts are defined as basic biological functions that can be encoded via genetic material – for example, an open reading frame, transcription promoter, ribosome binding site, phosphorylation motif, and so on. The critical distinction between all possible biological objects (for example, the complete set of open reading frames from a newly sequenced seawater sample) and a set of standard biological parts is that the latter can be purposefully designed and built from scratch in order to enable and facilitate reliable physical and functional composition. In fact, today, most engineered objects are produced from components that have been heavily refined in support of reliable physical and functional composition (e.g., the silicon, metals, and plastics in a desktop computer).

Science as a Vocation

"You wish me to speak about 'Science as a Vocation.' Now, we political economists have a pedantic custom, which I should like to follow, of always beginning with the external conditions. In this case, we begin with the question: What are the conditions of science as a vocation in the material sense of the term? Today this question means, practically and essentially: What are the prospects of a graduate student who is resolved to dedicate himself professionally to science in university life?" - Max Weber PDF

The Maker's Bill of Rights

Mister Jalopy writes in Make magazine, "If you can't open it, you don't own it." Thus, here's his draft of a Makers' Bill of Rights that supports accessible, extensive, and repairable hardware.

Correspondence with Dr. James Randerson of the Guardian

Dr. Randerson published an article titled "Lax laws, virus DNA and potential for terror." Here is my email correspondence with Dr. Randerson from prior to the article's publication.

How to Change the World

Thanks to Danny O'Brien for making the following disconnect obvious...

Exhibit A - 'Never doubt that a small group of thoughtful committed citizens can change the world. Indeed, it is the only thing that ever has.' - Margaret Mead

Zack Simpson at Mine Control has many interesting works of interactive visual display.
One that I thought was particulary interesting is called "Save the Baby."
You can check it out here. Check out his other stuff too.

Here's the letter I sent to the editors at Science in response to learning that "Some of his peers privately complain that Endy is a larger-than-life self-promoter."

I am writing to express four comments regarding an article written by Elizabeth Pennisi and published recently in Science, Vol 310, Issue 5749, 769-770, 4 November 2005 on the topic of "synthetic biology."

First, thanks for covering the topic.

Second, I was surprised to read, w/r/t me, that "Some of his peers privately complain that Endy is a larger-than-life self-promoter." You could imagine that my surprise had to do with realizing such lofty status while attending a conference hosted by Craig Venter of the J. Craig Venter Institute. Instead, what surprised (and saddens) me is that Science, the mouthpiece of the AAAS, would publish gossip based on unnamed source(s) as news; this is both antithetical to the practice of science and does nothing to advance science itself.

Third, and in the spirit of "actual-size" self-promotion, if you'd like to help your readers learn about the "unusual work" of my students, you could reference our paper "Refactoring Bacteriophage T7," published in a competing journal following ~5 months of reviewing inanity at Science [1].

Finally, I wonder if our society might benefit were E. Pennisi able to apply her formidable reporting and writing talents to coverage of the US federal government. For example, I am copying below the somewhat astonishing email -- verbatim -- that I received from E. Pennisi prior to attending the meeting at which we met. Surely special prosecutor Patrick Fitzgerald et al. could make good use of such skills.

I AM A REPORTER AT SCIENCE AND AM COVERING THE VENTER INSTITUTE MEETING NEXT WEEK. I NEED TO KNOW HOW MUCH OF YOUR TALK WILL BE NEW, UNPUBLISHED DATA AND WHAT THE BOTTOM LINE OF THAT RESEARCH WILL BE. ALSO, DO YOU KNOW WHAT OTHER TALKS WILL INCLUDE EXCITING NEW RESULTS?

THANKS FOR YOUR QUICK RESPONSE.

A Plan for Biological Engineering @ MIT

PDF reprint of Compton & Bunker article from 1939 on Biological Engineering at MIT.

Drew Endy earned degrees in civil, environmental, and biochemical engineering at Lehigh and Dartmouth. He studied genetics & microbiology as a postdoc at UT Austin and UW Madison. From 1998 through 2001 he helped to start the Molecular Sciences Institute, an independent not-for-profit biological research lab in Berkeley, CA. In 2002, he started a group as a fellow in the Department of Biology and the Biological Engineering Division at MIT; he joined the MIT faculty in 2004. Drew co-founded the MIT Synthetic Biology working group and the Registry of Standard Biological Parts, and organized the First International Conference on Synthetic Biology. With colleagues he taught the 2003 and 2004 MIT Synthetic Biology labs that led to the organization of iGEM, the international Genetically Engineered Machine competiton; teams of students at ~30 schools from around the world will compete in iGEM 2006. In 2004 Endy co-founded Codon Devices, Inc., a venture-funded startup that is working to develop next-generation DNA synthesis technology. In 2005 Endy co-founded the BioBricks Foundation, a not-for-profit organization that is working to develop legal and economic strategies needed to support open biotechnology. Drew's research interests are the engineering of integrated biological systems and error detection & correction in reproducing machines. 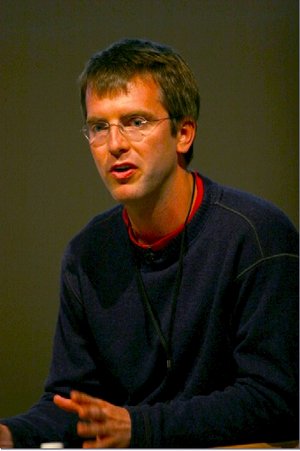 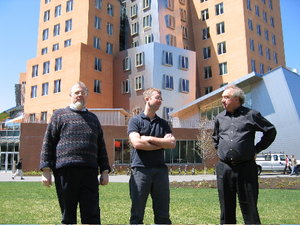 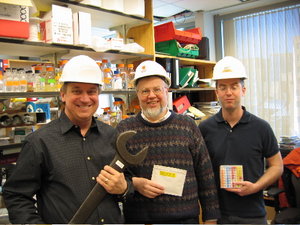 ~2005, Randy, Tom, Drew, working to bring you a Great Wall of BioBricks 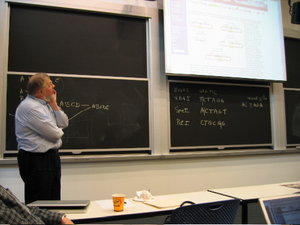 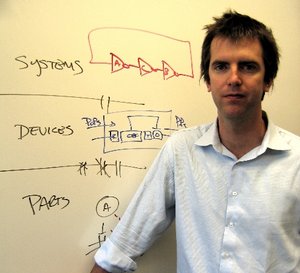 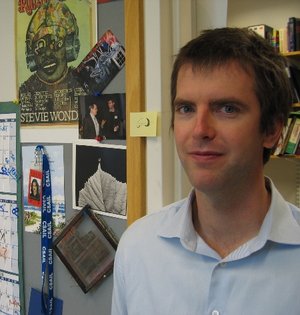 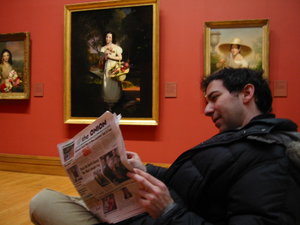 ~2003, Mike Elowitz reading The Onion at the Metropolitan 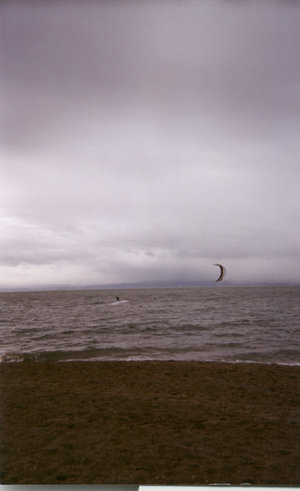 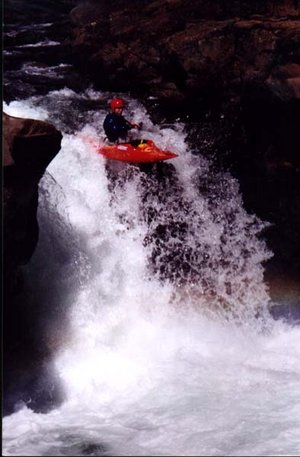 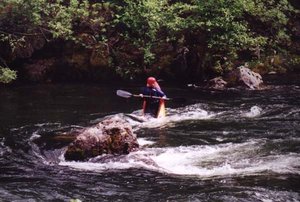 ~2001, paddling the Mokelume somewhere in CA 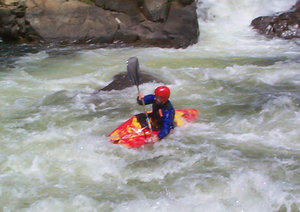 ~2000, paddling troublemaker on the SF American somewhere in CA 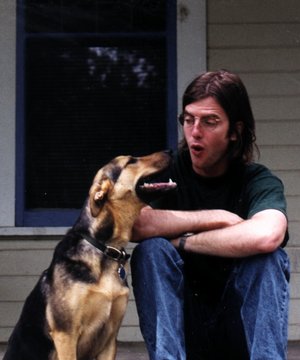 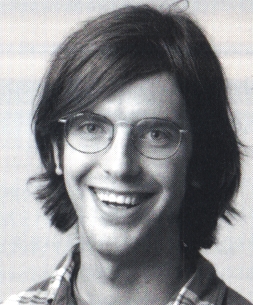