Objective: To design and assemble a devise that would allow us to map the adaptive landscape resulting from artificial genes that confer antibiotic resistance. 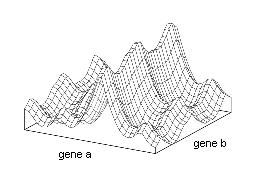 Given the medical importance of the process that lead to drug resistance, some strategies have been devise to prevent it:

I aim to construct a devise in which the relation between the different genotypes and some of the different evolutionary forces are known and they may be easily measured and modified. By analyzing the data derived from the devise, an adaptive map can be represented, and subsequently the movement of the population across the adaptive landscape could be predicted. 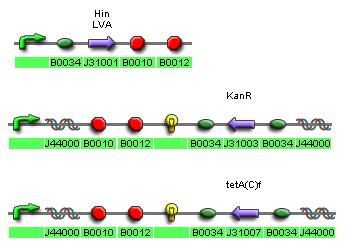 An example of the devise

In order to achieve such an ambitious goal I intend to construct a devise with two different regions susceptible to the action of invertases. An inversion in the system would allow the expression of a reporter and will confer the bacteria with resistance to certain antibiotic.

I intend to culture all the bacteria with nonlethal concentration of Kanamycin and Tetracycline and to estimate the fitness by means of colony counting. Having only two region susceptible to inversions the system will represent two different genes each one with two alleles. The topography resulting from the mutations will be fairly simple being that there are no intermediate mutations between the two alleles.

Some proteins are inverted to highlight that they will only be expresed with the inversion.