The ability to conduct micro scale dilutions within a low cost and high efficiency device has not only been helpful to chemists and biological researchers working with very small scale fluid interactions, but it has also opened up entirely new platforms on which to conduct experiments accurately on the micro scale. One area of significance within recent generation microfluidic systems is the ability to conduct accurate and ultra small volume dilutions, especially with reference to single micro volume droplets. The general principle of the droplet dilution system is that a droplet or series of droplets may be formed in which there is a set concentration of various molecules and that the ratio of molecules may be maintained or adjusted as desired. The ability to control and adjust concentrations of molecules within a single droplet in a near automated system has led to the adoption of such systems within areas as drug discovery, biological assay development, analytical chemistry, and more.

This category of microfluidic systems fall into a few major design categories, but in general they either operate by splitting a multi-component flow into droplets, or by combining droplets to form a new product droplet with its own ratio of molecules. The process of spitting a mixed flow into product droplets is often known as digitizing flow and can be accomplished via Y- or T-junction geometries. The second method of combining droplets to form new concentrations is often done by merging two flowing droplets, but also can be done by adding a droplet to a stationary volume.

Droplet formation is often achieved at either a Y- or T-junction where a feed flow enters a cross-flow, as seen in Figure 1. This liquid – liquid interface is well understood and the generation of single component droplets easily controlled by capillary, inertial, and viscous forces. The basic principles of this system are that immiscible flows connect in such a way that as one intersecting flow is introduced to the main flow some volume of the intersecting flow's lead portion is sheered off and thus forms a droplet.3

The mixing and dilution of droplets is often undertaken in one of three ways, multiple flows intersect to form a multicomponent droplet, A droplet is merged with another droplet or droplets, or a stream with some chemical gradient along its axis of flow is digitized into droplets of constantly varying concentration. In all these designs the basic goal is to form droplets with some controlled dilution between multiple chemical components. 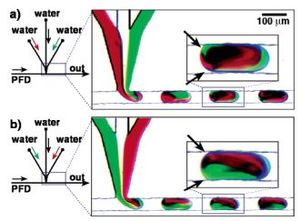 Fig. 2: The colored aqueous streams are solutions of red and green food dyes.2

By taking advantage of the T-junction's ability to form droplets, a diluted droplet may be formed by feeding the T-junction interface a mixed laminar flow. This design allows for variation in droplet concentrations simply by adjusting feed flow rates. This is demonstrated in Figure 2 where flows of red and green dye are fed to a T-Junction and their resulting droplet can be mixed via active or passive mixing depending on design and operating parameters. The composition of the droplet is a function of the feed stream component ratios and mixing method is determined by whether there is interaction between the droplet and the edge of the channel.

Fig. 3: Droplets were mixed rapidly by recirculation shown by white arrows. Plugs (droplets that block the channel but do not wet the walls) were transported with no dispersion.2

If the droplet is very small compared to channel dimensions and thus does not interact with the walls of the channel no active mixing will take place. Thus, passive mixing(diffusion) will dominate the process. In passive mixing of the droplet the swirling action of the droplet will not take place and the droplet's component parts will slowly diffuse in an effort to minimize molar osmotic differences. Swirling of the particle (active mixing greatly reduces the time before droplet will be well mixed. This swirling process is initiated as soon as the T-junction, as can be seen in Figure 3. The required length of the channel droplets must pass down before they are properly mixed is heavily dependent on style of mixing and can be reduced if more swirling action can be induced inside the droplets.

Merging Droplets With An Intersecting Flow

In this method individual droplets may be diluted by contact with an intersecting flow. An example of this is in Figure 4 where droplets passing a T junction collide and mix with a newly forming droplet. This method allows for individual droplets to collect a specific and adjustable amount of diluting secondary chemical. Dilution ratio is controlled by adjusting flow of T-junction fluid (yellow in figure), or my adjusting size of passing droplets (blue in video). This allows for droplet by droplet specific dilution ratios.6,7 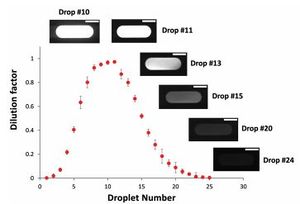 Digitizing of the flow is accomplished via a T- or Y-joint. As flow with changing concentration or ratios of molecules passes through the droplet forming joint a digitized flow of droplets. The stream of produced droplets will have a gradient of concentrations as shown in Figure 5 and 6.

Central to this design is the ability to adjust feed flow rates and flow rate of buffer solution. The Wereley Lab at Purdue, which is responsible for the design depicted in Figures 5 and 6, achieved this functionality using three peristaltic pumps. 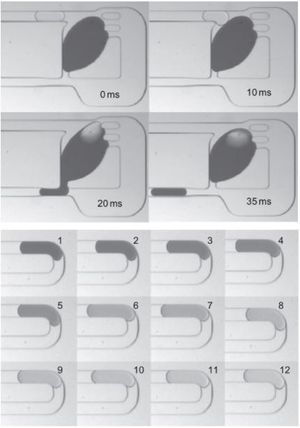 While microfluidics, which includes droplet dilution devices, have been largely impactful on the biological and chemical disciplines of science and engineering there are a few applications that are especially important. Within the biological sciences nearly no test has been of more significance than the development of the polymerase chain reaction (PCR)9. This is a process traditionally completed within a 0.5 mL volume PCR tube, yet using droplet microfluidic systems this single sample 0.5mL batch test may be transformed into a continuous process on the microscale, known as Digital PCR9. Hatch et al8 demonstrated a microfluidic device that via high speed sperial dilution was able to generate one million 50 picolitre sized droplet PCR samples in under seven minutes and then run image analyses on all one million samples simultaneously10. Not only does this greatly reduce the sample size needed to run successive experiments, but it also conducts more experiments in a short period of time then ever has been possible before. High throughput, low cost digital PCR using droplet diffusion microfluidics promises to greatly enhance quality of PCR testing.

The synthesis of enzymes and proteins are laboratory procedures vital in drug discovery, production, and clinical testing. Traditionally, this has involve the culture of cells and purification of their produced molecules. These molecules would be tested against various compounds or used in subsequent biological experiments. Mazutis et al12. has demonstrated a method where via a microfluidic droplet diffusion device he was able to accomplish in vitro protein synthesis. More impressive still is a recent publication in which the team was able to generate proteins from amplified genes in a process very similar to PCR. In this experiment the team demonstrated that via a microfluidic droplet diluting system they were able to generate and screen [math]10^6[/math] unique proteins with only 150 microliters of reagents11.