Equation 1 [3]: Fick's law, where Ni is molar flux (mols/m^2*s), Di is the diffusion coefficient (m^2/s) specific to a specific mixture, and ci is the concentration of i (mol/m^3). In a microfluidic device the gradient with respect to distance is very large, so the diffusive flux for any particle inside the device is very large.

Due to the small size of microfluidic devices, traditional separation techniques are not very applicable. However, research has been done to utilize chemical engineering principles on the microscale. Diffusion is a particularly advantageous method of separation due to the low Reynolds number of fluids and small size of particles on the microscale. Although diffusion limited transport poses challenges for mixing, it can be very beneficial for separations [1]. As the scale of operation decreases in size, the efficacy of diffusion as a transport mechanism increases. For example, a small bacterium sized particle with a diameter of 0.5 μm takes 200 seconds to travel 10 μm by diffusion. A smaller molecule with a molecular weight of 330 which would take only 0.2 seconds to travel that same distance [2]. Fick's law (equation 1) makes it clear that diffusion is a viable method for transport and separation in microfluidic devices, due to the small length scales of channels within these devices. 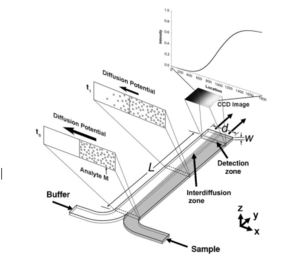 Figure 1. [4] T-sensor: The sample channel meets the buffer channel and the sample can diffuse into the buffer over the length L. Then the fluid hits a sensor, where the diffusion gradient is imaged.

The T-sensor is an accurate way to examine the diffusion of two fluids into each other. Two fluids are flowed into the same channel at the same rate, and imaging techniques are used to view diffusion gradients. The more viscous fluid occupies a greater fraction of the channel containing two fluids as demonstrated by νA/νB ≈ µA/µB (equation 2), where µi is the viscosity of species i, and νi is the fraction of the channel occupied by i.[4] Although T-sensors are widely used to study the diffusive properties of fluids, they are rarely used to separate fluids.

The H-filter is similar to the T-sensor, but instead of imaging fluids, is can be used to achieve separation. The H-filter is essentially a T-sensor in which the combined fluid channel splits into two channels. The H-filter uses the principle that larger molecules diffuse at a slower rate than small molecules[5]. Separation of the two species depends on the diffusion coefficients of each species, the contact time, which is a function of length and fluid flowrate, and the dimensions of the channel [6]. One of the most practical uses for the H-filter is a membrane-free dialysis process as demonstrated in figure 3, which illustrates how the H-filter can be used to effectively separate glucose and urea from albumin [8]. 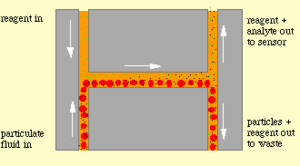 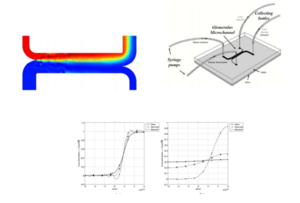 Advantages of Diffusion Based Separation

While many separation techniques require reaction components, or induced electrical fields, diffusion does not; it simply takes advantage of the natural flow properties of the fluids entering a device [2]. This has several advantages over other separation techniques. It is significantly less expensive to make microfluidic devices that do not require reaction components that have to be anchored to a solid support, or electrical components, such as batteries [2]. In addition, the lack of chemical, electrical, and mechanical agitation allow the conditions to mimic that of a cell, which is important for biological analysis and potential microfluidic medical devices. Similarly, diffusion allows for direct analysis of complex samples without prior separation, which often times can interfere with components such as blood cells [2].

Disadvantages of Diffusion Based Separation

There are several factors that limit the efficacy of diffusion as a separation method. Diffusion based separation can only be acheived in laminar flow regimes, so convection can be a large problem, particularly in relatively large microfluidic devices [9]. When fluid channels increase in width and depth, the Reynold's number increases, making flow more turbulent. This turbulent flow causes fluid mixing to occur, which makes diffusion based separation nearly impossible. Some advances have been made with gel matrices to limit convection in relatively large channels [9]. Another drawback of diffusion is that although can effectively separate molecules of different sizes, it is not useful for separating molecules of the same size. Diffusion is a property of nature, although particles or processes can be changed, diffusion itself follows strict laws of nature such as Fick's Law [3].