Figure 1. Diagram of a nephron and the processes [1]

The human kidney is an essential organ, playing vital roles in both the urinary and endocrine system. The kidney maintains the chemical and water balance of the body with the help of nephrons, which are the functioning units that remove waste from the blood. Nephrons accomplish this through filtration and both active and passive transport; each kidney has approximately 1 million nephrons. Figure 1 shows a nephron and the processes that occur [1][2][3].

It is important to note that the blood enters the nephron at the glomerulus, which filtrates solutes up to 60,000 Da. The glomerular filtration rate (GFR) for an average person is roughly 125 mL/min, or 180 liters/day. The resulting fluid and solutes then enter the renal tubes, where different types of transport occurs [1][2].

In the proximal tube (first part of the renal tube), water is reabsorbed back in the blood stream: around 178 liters/day. Other substances are also reabsorbed, such as sodium and glucose. Glucose is always fully recovered while sodium is regulated; depending on the salt concentration within the body, sodium is either reabsorbed or secreted [1].

The substances that were not filtered out in the glomerulus, like hydrogen and potassium ions, ammonia, and certain drugs, enter the peritubular capillaries. These components are then secreted into the distal tubule (second part of the renal tube). The toxins are then sent to the bladder with the ~1% of water that wasn't reabsorbed [1].

The kidney also has other important functions by sensing the composition of the blood and secreting substances that aid in bone metabolism, red blood cell production, and blood pressure regulation. When kidneys are no longer able to function as intended, renal failure occurs and can be classified as acute or chronic. Both can be treated with dialysis if there is not a donor organ available [2]. 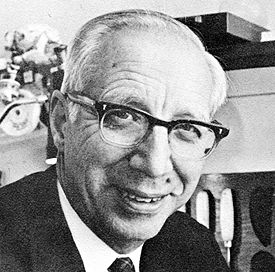 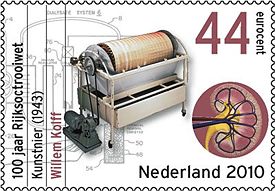 1854 - Thomas Graham developed an apparatus that held urine and water separated with a membrane. After several hours, sodium chloride and urea were found to have transported across the membrane. Set the basis for dialysis. [4]

1945 - Kolff treated a 67 year old woman with longer dialysis time and she survived for another seven more years. [5]

1947 - Kolff donates his dialysis machines to other hospitals, allowing other doctors to learn the design of the machine and improve upon it. [5][7]

1948 - First hermodialysis machine constructed in the US to be used at Peter Bent Brigham Hospital. [5] 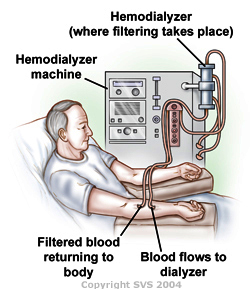 Hemodialysis involves direct dialysis with the blood. Blood is removed from the patient and put through a machine that acts as an artificial kidney, removing the toxins and going right back to the patient. Due to the dialysis machine not being part of the patient's body, anti-coagulates need to be mixed with the patient's blood. The blood is accessed with the help from either a catheter, AV fistula, or AV graft; fistulas are more common. An AV (arteriovenous) fistula is where a patient's artery is directly connected to their vein due to a surgical procedure [2].

Blood is taken out of the body anywhere from 50 to 500 mL/min, all dependent on the patient's health. Once in the machine, the blood is pumped into a chamber where the dialysis fluid is flowing concurrently and is separated by a synthetic membrane. Hydrostatic pressure and concentration gradients cause the majority of uremic toxins and water in the blood to flow across the membrane and into the dialysis fluid. The purified blood is then fed back into the patient. The dialysis fluid flow can be down either in batches or continuous flows, but either way the procedure needs to be closely monitored. Any error in the mixing will cause the wrong concentration gradients to form for the patient. On average, patients who require hemodialysis need to get their blood purified three times a week, with 3-5 hour sessions [2].

Unlike hemodialysis, peritoneal dialysis occurs in the peritoneal cavity. Within the cavity is the peritoneum, which is a thin membrane that forms a closed sac around the abdominal organs. The patient will have a permanent cannula or catheter in place, which will allow dialysate to flow in and out of the cavity. The peritoneum allows transfer of solutes from the blood, and after a certain time has passed, the dialysate will flow out of the cavity and into a drain pipe. This form of dialysis is not as efficient as hemodialysis, with the dialysis cycle to take around 30 minutes and the entire process to last 8 to 12 hours [2].

One reason why one would prefer this form of dialysis over hemodialysis is that this process occurs in the comfort of your home. Due to the procedure length, it is usually done at night when the patient is asleep. Another advantage is that the patient's blood never comes into contact with a foreign source, taking anti-coagulates out of the equation. There are a few disadvantages with the this type of dialysis however. The peritoneum is very sensitive, and peritonitis can be caused if something were to go wrong with the cannula, catheter, or dialysate itself. Also, permanently having a catheter on your body can greatly limit your range of activities, such as going to the pool or taking baths [2]. 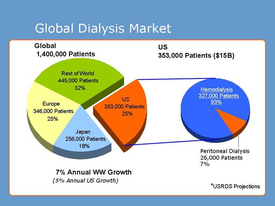 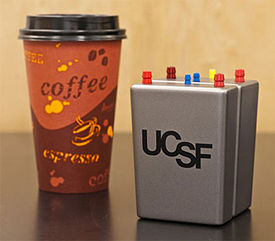 Human nephrons can only regenerate partially; they are not able to grow new ones. Fish are able to grow new nephrons however, and zebrafish have been extensively studied in order to try and emulate their kidney cells ability to self-replicate. Research has found that the zebrafish kidneys probably contain self-renewing nephron stem/progenitor cells. Future research into this field can allow scientists to try and replicate the growing of new nephrons in humans [10].

There has been long debate about whether the technology would be created that will allow humans to bypass dialysis and "wear" an artificial kidney that is cheap in the near future [11]. The University of California, San Francisco (USCF) is looking to end that debate as soon as possible. They were able to create an artificial kidney that requires no power source and is projected to be equal or less in cost then a kidney transplant. It will have an operational lifetime of around a decade; it can filter blood and respond to some chemicals in the system with feedback. The first clinical trials for this device are planned for 2017, and the device itself is on an accelerated track for FDA approval [12]. (See source for video on the device).

It is apparent that the both of the research approaches described above can have a drastic impact on the lives of those that require dialysis. Whether it be allowing them to regrow an entire kidney, or have an artificial one instead, it would allow people to live their lives without the worries of having to spend countless hours near a dialysis machine to survive. However, these technologies could prove to be even more important for those that are not even able to have dialysis due to financial restrictions.

Figure 7 shows the global market for dialysis as of January 2013. The "Rest of World" portion has been amplified with the growing market in India. Currently, there are 52,000 Indian patients on dialysis, but this is nowhere near the amount of people that require it. While dialysis in India costs 4 to 33 percent of the cost in the U.S., more than 90 percent of the 230,000 that develop chronic kidney failure each year are unable to acquire treatment [13].