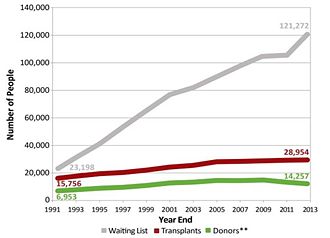 Figure 1. Graph of number of people on the waiting list, transplants and donors [16].

Shortage of organ donors is the main problem in the field of tissue engineering. In 2015, there are more than 120,000 people waiting for organ transplant. The number of people in the wait list exhibits increasing trend, meaning that the gap between the people who need the organ and the donors is getting bigger. Even if the recipient were to receive organ from the donor, there are chances that their body would reject the transplanted organ. Rejection is resulted from the response of the immune system of host’s body to the foreign organ, which could potentially result in destruction of the transplanted organ. The current solution to this problem is the use of immunosuppressant, which is a type of drugs that weaken the immune system of the host. However, the problem resulted from this treatment is that the host, with the immune system suppressed, is more susceptible to diseases. The host’s immune system detects the markers on the cells of the transplanted organ. However, the components of ECM of the organ are conserved between individuals and even some species. Therefore, the idea of decellularization emerged: what if one can create a transplanted organ that is made of cells from the host?

Decellularization of organ is the removal of cells from the organ, leaving the functional and structural proteins of the extracellular matrix (ECM) scaffold [1]. The ECMs of different organs are different and unique to the organ because they are made of the proteins secreted by the cells that are specific to each tissue and organ. The ECM scaffold of specific organ has been shown to influence cell migration to the scaffold, proliferation, and differentiation toward the scaffold lineage [1]. Therefore, decellularized organs can potentially be recellularized with host’s cells and transplanted into the host’s body, eliminating the problem of transplanted organ rejection. There are several strategies for decellularizing an organ, mainly via the use of chemical agents, physical agents, and enzymatic treatments. The ultimate goal of decellularization is to remove all of the cells in the organ while minimize, rather than eliminate, which was proven to be impossible, the effects on the functions and three-dimentional structure of the ECM scaffold [1].

Strategies for decellularization and their problems

Decellularization can be achieved by using chemicals than break down the cells and the DNA component of the cell. The most widely used chemicals for decellularizing an organ are detergents such as Triton X-100, sodium deoxycholate (SDC) and sodium dodecyl sulfate (SDS). Studies have been conducted to test the extent of cell removal on different organs using various detergents and concentrations [1]. Typically, SDS is the most effective detergent which removes the cells and their nuclei from the organ, with a sacrifice of some extent of disruption to the 3D structure and potential loss of growth factors [1]. Chemicals such as acids and bases, osmotic solutions, and alcohols are also effective in removing cells from the organ. Particular acid or base can catalyze degradation of specific molecules. For instance, acetic acid degrades collagen, which is one of the most abundant structural proteins of the ECM. However, it does not affect sulfate glycosaminoglycan (sGAG), biomolecules that is abundant in connective tissues. Therefore, the selection of acids or bases used for decellularization is highly dependent on the subjected organ. Osmotic solution, namely hypotonic and hypertonic solutions, can be alternately applied to lyse the cells via osmotic effects. Alcohol can also be used for decellularization because it dehydrates cells, resulting in cell lysis [1].

Enzymes are proteins that catalyze reactions. Each enzyme catalyzes a very specific reaction; they have specific target substrate(s) that they can bind and convert to product(s). Enzymes used in decellularization of organs are the ones that cleave specific components of the cells. The list includes, but not limited to, nucleases, tripsin, collagenase, lipase, dispase, thermolysin, and α-galactosidase [1]. Nucleases, namely DNases and RNases, cut the phosphodiester bonds of the nucleic acids. Therefore, they can be used to remove the nucleic acid components of the cells. Trypsin, a serine protease, is a very wide used enzyme for desorbing cells that are adhered to a platform. It can be used for decellularization; it removes cells from the organ while disrupting elastin and collagen in the ECM scaffold. It is often used prior to other decellularizing agents to increase the degree of penetration of the agents to follow. Dispase has been compared to trypsin. It has been shown that dispase resulted in higher degree of decellularization in comparison to trypsin with greater extent of ECM disruption. Collagenase, even though it directly cleaves the peptide bond in collagen, can be used in decellularization when the conservation of collagen is not necessary. Lipase and α-galactosidase aid decellularization process; alone, they are not sufficient to complete decellularization process [1].

Physical agents typically used in decellularization are temperature, force, pressure and non-thermal irreversible electroporation (NTIRE). Techniques involving temperature change such as freeze-thaw can be used to effectively lyse cells in contact with the organ. However, the cell contents –i.e. biololecules, remain with the organ. These molecules need to be further removed by other techniques such as rinsing with detergents. Force and pressure can be used, along with other chemical or biological agents, to aid the removal of cells from the organ. Mechanical force is used to cause abrasion to the cell layer on the organ. However, ECM disruption is the inevitable result of using force. Hydrostatic pressure is applied to the organ to remove cells. The use of hydrostatic pressure can be more effective in comparison to the use of chemicals or enzymes, with greater extent of ECM disruption.

Chemical, physical, and enzymatic agents can be used in combination to achieve complete decellularization of particular tissue and organ. Different protocols, using many types of decellularizing agents, have been ulitized to decellularize different tissues and organs.

Decellularization can be effectively achieved using perfusion bioreactor. The perfusate is pumped, by a pump, from the reservoir into an organ chamber. A pressure sensor is placed downstream of a pump. The sensor interprets the pressure, generated by the pump, of the perfusate stream and sends the data to a feedback proportional-integral-derivative (PID) controller. The PID controller, in turn, control the pressure generated by the pump as set by the user. The perfusate collected in the chamber is recycled back to the reservoir.

Currently, there are limitations to the perfusion decellularization method. Damaged or infected organs have not been widely experimented on. These limitations are very important factors considering limited number of donated organs and the possibility of getting impaired organ from the pool. It is reasonable to hypothesize that such organs would affect the efficacy and the success of decellularization using perfusion bioreactor [15].

Figure 6. CT images of vasculature of porcine kidney before (a) and after (b) decellularization [3].

In the United States, more than 100,000 people are currently awaiting kidney transplantation. Worldwide, 13 percent of the population is affected by the chronic kidney disease [3]. Kidney failure is a potential result of chronic kidney disease. Currently, kidney failure can be treated with two main treatments: frequent dialysis and kidney transplantation. Dialysis performs the filtration function of the kidney but it does not maintain homeostasis nor does it replace the endocrine systems of the actual kidney. The problems with kidney transplantation are the limited access to kidney transplantation due to the scarce kidney donors and the immune rejection of transplanted kidney. In 2012, Sullivan et al performed an experiment using perfusion bioreactor system to compare the efficiency of SDS and Triton X-100 detergents in decellularization of porcine kidney. The results of the experiment show that decellularization achieved using 0.5 percent SDS, in comparison with 0.25 percent SDS and 1% Triton X-100/0.1% Ammonium Hydroxide, yielded greater extent of cell removal and least amount residual DNA. With highest decellularization efficiency, SDS-decellularized kidney was shown via CT-imaging to have the native vasculature preserved. Porcine kidney decellularized with 0.5% SDS was the only sample with lower residual DNA than the amount that could initiate immune response. Also, 0.5% SDS-decellularized kidney is the only sample that can be reseeded with human renal cells, after residual SDS was rinsed, indicating that it is the only scaffold that is not cytotoxic to cells [3].

In 2014, Wang at al compared four detergents used in the perfusion decellularization system of porcine kidney: 1% SDS, 1% Triton X-100, 1% peracetic acid (PAA), and 1% Sodium Deoxycholate (NaDOC). The results suggest that 1% SDS is the most efficient detergent in removing cells from porcine kidney; the decellularized kidney had least amount of residual DNA. They also proved that using Triton X-100 as a rising solution facilitates the removal of residual SDS [14].

Figure 8. Cell density of the wall and the cusps of native (blue) and decellularized (red) of the aortic and pulmonary homografts [13].

In 2013, Song et al reseeded a decellularized rat kidney with endothelial and epithelial cells. The process of recellularization, specifically the delivery of cells, was aided by the pressure gradient generated by a vacuum. Urine production of the recellularized kidney was detected, although the production is only 23% of the cadaveric kidney. The recellularized kidney was orthotopically implanted in rat. Urine production of the implanted kidney construct was found to be lower than the production from native kidney. Blood filtration was performed by the transplanted kidney. This proved that recellularized kidney that is orthotopically transplanted can perform the functions of native kidney, though he functions are performed to the same extent [5]. Long term effects of implanting the recellularized organ were investigated by Barbera et al in 2014. Aortic and pulmonary homografts were isolated from sheep, decellularized using perfusion bioreactor with SDS and Triton X-100, and implanted in sheep for 14-21 months. For both implanted decellularized aortic and pulmonary homograft, cells densities are higher at the outer part of the wall and the belly of the cusps. The overall densities of the wall and the cusps of the implanted samples were significantly lower in comparison to the native homographs. Immune rejection or other kinds of response were not present during the period of implantation [13].