The Need for a New Source of Kidneys

Currently, the organ wait list does not have enough kidneys to provide for all of the people who need the organ. Chronic kidney disease can lead to kidney failure, which can only be treated with frequent dialysis or organ transplantation. Kidneys are the most common organ that people are waiting for, but very few transplants are actually performed, so there is a shortage of organs that cannot currently be met by donors. [1] It is currently estimated that 13% of the total worldwide population is affected by chronic kidney disease. [2]

While dialysis can successfully replace the kidney's filtration functionality, it cannot contribute to homeostasis and the endocrine systems in the ways that a functional kidney can, so dialysis falls short in situations where the kidneys have completely failed. Kidney transplants can fulfill all of the functions of the original kidneys, but even the few people who receive transplants have the constant risk of organ rejection. To combat this possibility, the patients must take immunosuppressants, but these do not work indefinitely. [2]

Similarly sized kidneys from other animals could be used as donor organs to help deal with the kidney shortage. To prevent organ rejection, the kidneys must first be decellularized, leaving behind just the ECM scaffold and vascular network. Much work has been done with the decellularization of mouse kidneys, but less work has been done on the larger scale decellularization processes with kidneys that are comparable in size to human kidneys. One such kidney is the porcine kidney. [2]

General Decellularization Process To decellularize an organ, one approach involved agitating the tissue inside of a detergent solution, but this method is rough on the organ. Also, due to diffusion limitations, the detergent cannot reach the center of larger organs. Rather, researchers have begun taking advantage of the native vasculature of the organ to introduce detergent and spread it throughout the organ, causing less damage to the organ itself. In a process that takes a couple days, the organ is first filled with deionized water, then filled with detergent, and finally deionized water is sent through again. This leaves behind an intact matrix that is devoid of 98% of the cellular DNA, which is a marker of whether cells were successfully removed or not. This method is one of the first that can work for kidneys as well without losing the renal vasculature. [3]

One part of the process that varies with different organs and different sizes is the type of detergent that is optimal for decellularization. [2] 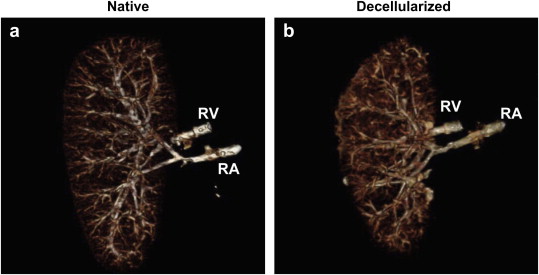 Figure a shows a native porcine kidney with complete vasculature and figure b shows the remaining vasculature after decellularization with 0.5% SDS. [2]

Decellularization of Porcine Kidneys Sullivan et al. sought to optimize the decellularization process to produce whole, clinically-relevant scaffolds out of pig kidneys. They compared two commonly used detergents, Triton X-100 and SDS, to find out which one creates a better scaffold while losing the native cells. Two concentrations of SDS (0.5% and 0.25%) were tested side-by-side with 1% Triton X-100/0.1% Ammonium Hydroxide to see which conditions could potentially be used for the creation of viable organ transplants. The researchers found that all three detergents produced decellularized organs with intact vasculature, but only the SDS-treated scaffolds were not cytotoxic. They hypothesized that the Triton X-100 scaffold would need a more rigorous wash afterwards to reduce cytotoxicity; however, all three conditions were stated as possible scaffolds for the generation of functional kidney transplants. [2] 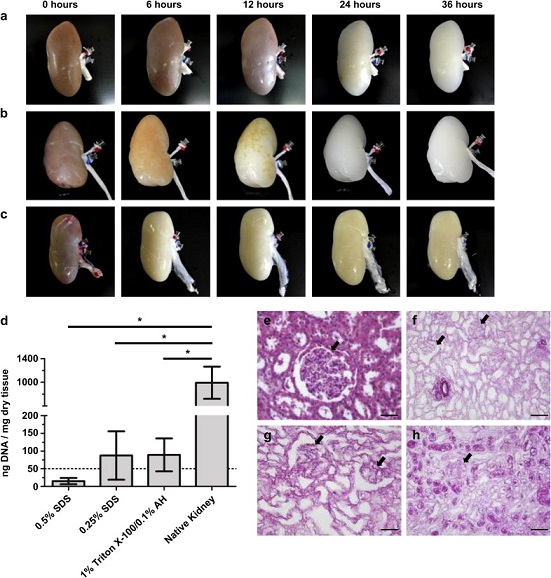 Recent Advances in vivo at Mass General Hospital Using a similar process to that of Sullivan et al., Song et al. utilized 1% SDS to decellularize rat, pig and human kidneys and showed that the cellular material was successfully removed without affecting vasculature or glomeruli. The authors then proceeded to recellularize the rat scaffold with enothelial and epithelial cells along with rat neonatal kidney cells by utilizing a vacuum-induced pressure gradient. The recellularized rat kidneys were then transplanted into rats to test for function, and it was found that they actually produced urine and were able to filter the blood. The recellularized kidneys did not function at native organ levels, but they showed that recellularized organs can retain the function of the organs they are meant to replace. [4]

Currently, bio-engineered organs usually suffer from a lack of oxygen and nutrients due to poor vascularization, but decellularization bypasses this problem by retaining the native vasculature. However, one problem with decellularized organs from other species such as pigs is the presence of residual cells and DNA fragments. These can induce an immune response resulting in organ rejection, so work still needs to be done in completely removing all cellular material from the scaffolds. [2]

Additionally, once the scaffold is ready, the process of reseeding needs to be optimized to create functional organs. Kidneys contain over 30 different cell types which all need to be replaced to have complete kidney function [2]. Experiments at MGH showed that reseeded decellularized kidneys can produce a rudimentary urine in rats, but the process still requires some optimization to restore full kidney function. [4]