Link to Excel File: Nomenclature Scheme for all Davidson Parts[1]

Link to Excel File: List and description of Davidson Parts[2]

The decoder is represented by 7 strips that have the potential to form any number from 0-7, symbolizing the 8 different possible combinations of chemicals. In order to accomplish this goal we will need 8 different cell types. Each cell type number 0-7 will contain 3 different anti-switches, in one of 8 different combinations of “on” and “off” switches. 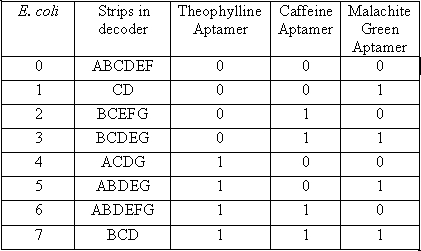 In the table a 0 represents the presence of an “off” switch and 1 represent an “on” switch. For instance when the only chemical present is malachite green, only the stripes in the decoder labeled C and D will glow, giving the visual image of one. When the number one appears it corresponds to only malachite green being present.

When both malachite green and Caffeine are present the number 3 will be visible will be visible. At first this may seem like a problem because both 1 and 2 should also show up in the presence of these chemicals, but remember that there are also off switches in both of these cell types. Therefore the second chemical in each case will inhibit the production of the fluorescent protein only allowing the 3 to be visible.

By following this same logic all 8 different combinations of these three chemicals can be discerned using this decoder, in a visual manner.

Each strip will be made using a combination of each of the cell type necessary to induce YFP production under each individual condition. For instance strip A will have a mixture of cells # 0, 4, 5, and 6.

We had reported a variability in i6060 fluorescence intensity but could not figure out why it varied. Kristen took samples of bacteria from a single plate that had different intensities, grew them, measured their fluorescence, then minipreped the DNA. As you can see from the gel, there is a good correlation between the amount of plasmid and the amount of fluorescence. All cells were grown in media from a common stock bottle, so we are not sure why they varied.

It is interesting to think that different colonies can carry different loads of plasmid and this is responsible for the difference in fluorescence. 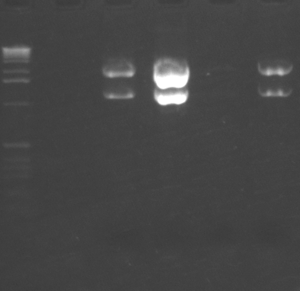 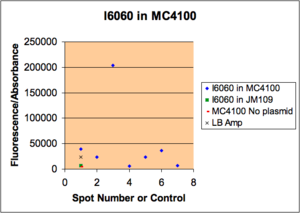 Spot numbers correspond to the spot numbers for the photo of the gel electrophoresis.