The protocol below was adapted from the "SMART protocol for RNA-seq - revised June 3, 2016" by Arthur Hunt in the Department of Plant and Soil Sciences at the University of Kentucky and used at the GCAT-SEEK Workshop held at Cal-State Los Angeles on June 27 - July 1, 2016. Further annotations were made by Kam D. Dahlquist.

Set up Phire Hot Start II DNA Polymerase (Thermo Fisher catalog #F-122S) PCR reactions using the PE-PCR1 and PE-PCR2 primers. The total reaction volumes should be 25 µL, and 1 µL of the library should be used as a template. Make a master mix with all the components of the reaction, except the template, and add 24 µL of it to 0.2 mL PCR tubes containing the template.

The thermocycler program is shown below. The annealing temp is 60°C (for 15 sec), and the extension time is 60 sec. (In principle, the extension time can be decreased, perhaps to as little as 30 sec; I use 60 sec to make sure every amplicon is completed, so that no odd PCR strand-switching artifacts arise later due to the buildup of truncated products.) 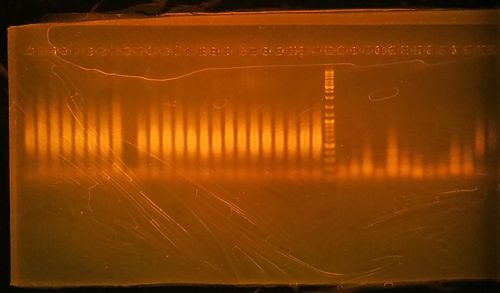 21 cycles left side of gel 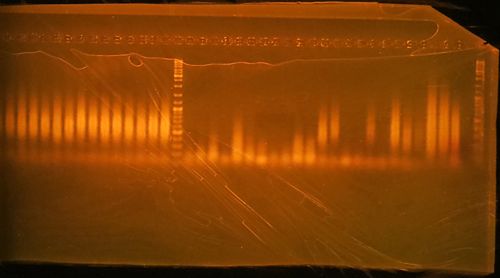 21 cycles right side of gel

24 cycles left side of gel

24 cycles right side of gel