The immune system is the tool by which the body protects itself from pathogens. The immune system is comprised of multiple cell types and signaling pathways that allow for both short term response, and long term memory. Autoimmune diseases are characterized as abnormal immune responses in which the immune system confuses native cells for pathogens. Autoimmune diseases affect approximately 23.5 million people per year. While there are over 80 different types of autoimmune conditions, the most common are: Type 1 diabetes, Rheumatoid Arthritis, Lupus, Multiple Sclerosis, and Celiac Disease. [1] Biomaterials that trigger specific immune responses can be used to recruit the body’s own defense system to fight diseases such as cancer [2]. As such, there are two main goals to the use of biomaterials in this area: To curb unwanted immune response, and engage specific immune response. 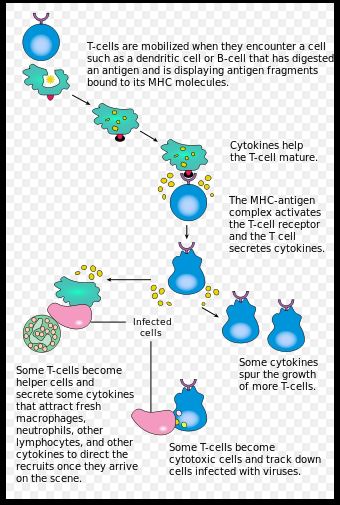 Characteristics of Biomaterials for controlling Immunity

Adaptive immunity is governed by the response of immune cells (T-cells and B-cells) to specific antigens. T-cells and B-cells encounter antigens via Antigen Presenting Cells or APCs in the lymph nodes. B-cells, which control long term immunity are activated by binding to APCs and additional signaling from helper T-cells. Killer T-cells, which actively seek out infected cells, require binding to an epitope on an expressed antigen, as well as costimulation via other receptors on the APC. Manipulating these two-signal pathways is key to modulating immune response (3) There are three main characteristics of biomaterials to consider when attempting to engineer immune responses: Epitope content, size, and multivalency. [2] Adaptive immune responses are controlled by the presence of antigen binding sites or epitopes. These epitopes are sequences of amino acids on an antigen recognized by T-cell or B-cell receptors. These epitopes are presented via two different pathways. Extracellular antigens are taken up via phagocytosis and are incorporated into a set of surface proteins on the APC called the Major Histocompatibility Complex -II (MHC-II). These epitopes are recognized by CD4+ helper T-cells. Intracellular antigens are digested into short peptide fragments by proteasomes, before being attached to the MHC-I complex of an APC. These epitopes are recognized by CD8+ killer T-cells. [3] Predictive algorithms exist for determining if a sequence of amino acids that might be present on a biomaterial are likely to behave like either epitope. T-cell epitope prediction is generally more accurate because the T-cell epitopes are generally shorter, only 8-10 amino acids in length. The B-cell epitopes can be anywhere between 9 and 40 amino acids in length. Moreover, these B-cell epitopes can be discontinuous sequences so there is a need to be able to predict the 3-D structure of a folded amino acid sequence. The ability to predict the occurrence of these epitopes is key to preventing unwanted immune response to biomaterial implants. [3] It is also possible to take advantage of these epitopes to elicit desired immune responses. [4]

In addition to the control of epitope expression on biomaterials, the size of the biomaterial as well as the concentration of epitope occurrence on the surface are significant factors in modulating immune response. Since most biomaterials are generally delivered to peripheral tissues, the size of the material or its derivatives determines whether it can interact with APC rich areas of the body, such as the lymph nodes. As such, designing biomaterials to target APCs in these regions involves working with particle size constraints. Scientists have found that smaller particles of size less than 70 kDa are most effective at CD8+ T-cell activation. As particle size increases, there is an increased bias toward CD4+ T-cell activation, and slower uptake time. Multivalency, or the concentration of epitope occurrences on a biomaterial surface is also a key factor in controlling immune response. The multivalency of a biomaterial can be increased using synthetic scaffolds or recombinant proteins. This was successfully demonstrated in 1988 with the creation of a high density multiple antigenic polypeptide system [5].

In vivo, T-cells are activated by APCs so one strategy for controlling T-cell activation is to engineer biomaterials that modify APCs to specify T-cell phenotype. There are two main target APCs, macrophages and dendritic cells (DCs). While both are capable of modulating T-cell activity, the latter is much more efficient at antigen processing and presentation [3]. Since DCs are concentrated in the lymph nodes, where B-cells and macrophages are largely not present, DCs offer a more targeted control on T-cell immune response. Studies have shown that lymphoid-derived DCs can be made to present antigens on both MHC-I and MHC-II, despite only being predisposed to MHC-II, using licensing factors that would normally occur in the presence of infection. In one study on melanoma, a combination of antigens and licensing factors derived from cancer cells was incorporated into a PLGA scaffold. The scaffold was then able to recruit DCs upon implantation and trigger T-cell response to the introduction of cancer cells in mice [6].

Given that the functional and phenotypical heterogeneity of DCs is not fully understood, and that DCs exhibit different heterogeneity in mice than humans, biomaterial therapies that target DCs may not always perform as predicted in experimental models. As such, biomaterials capable of direct T-cell stimulation, without an APC intermediate are a promising alternative to the DC approach. The basic approach behind these materials is to eliminate the need for APCs by creating APC mimicking biomaterials that present antigens and cofactors in a controlled way. One example of an APC mimicking materials is shown in figure 2. The artificial APC shown in figure 2 exhibits binding site that triggers proliferation of killer T-cells and apoptosis of helper T-cells. The T-cell stimulating chemical cytokine interleukin 2 (IL2) is encapsulated in a membrane exhibiting specific ligands to trigger CD8+ T-cell proliferation, and CD4+ T-cell apoptosis in vitro [7].

T-cell Tolerance refers to mechanisms which modulate T-cell affinity for self-antigens, that is to say antigens that point to native cells. Misregulation of these tolerance pathways presents as autoimmune disorders, such as MS, allergic response, and transplant rejection. T-cell Tolerance is governed in humans by three main mechanisms: T-cell anergy, T-cell deletion, and induction of regulatory T-cells. As such, there is increased interest in biomaterials capable of affecting these tolerance pathways [3]. For example, Getts et al. immunized mice with encephalitogenic myelin-derived peptides which were crosslinked to polystyrene beads or to PLGA particles to treat relapsing experimental autoimmune encephalomyelitis (R-EAE), which is a mouse model for MS. This biomaterial method operated by inducing T-cell anergy (ineffectiveness). The peptides provided an abort signal to T-cells and prevented the production of cytokines that would cause inflammation [8]. In another unique approach, antigens were bound to red blood cells in mice. The red blood cell debris is known to have a tolerance inducing effect, by promoting T-cell deletion. In the study, diabetogenic mice were treated with antigen-bound red blood cells to increase tolerance for the antigen associated with type-1 diabetes. Results showed a significant prevention of the destruction of insulin producing islet cells in the pancreas due to T-cell deletion, thereby slowing the onset of diabetes. Lastly, T-cell regulation has been exploited in vitro using PLGA infused with certain cytokines to induce the differentiation of double negative T-cells into regulatory T-cells, or Tregs with both human and mice cells. Further study on these microparticle formulations in vivo could yield an effective strategy for controlling antigen-specific T-cell activity [9].

Biomaterials have the potential to control immune response for the treatment of disease. Biomaterials have been shown to be able to control T-cell activation through direct and indirect stimulation of the T-cell receptor. Strides have also been made in generating T-cell tolerance to self-antigens or graft antigens. Recent studies have increased our understanding of what mechanisms control immune response. As these mechanisms, such as DC heterogeneity, epitope recognition, and T-cell tolerance, are further elucidated, new biomaterials can be engineered to elicit desired immune response, and prevent autoimmune disorders.