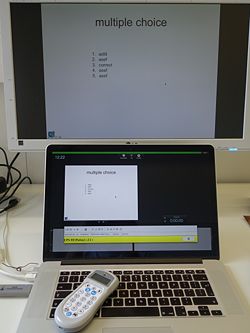 eInstruction is a company making clickers for audience response in lectures and seminars. As of Aug 2013, eInstruction is owned by a previous competitor Turning Technologies. For the time being, the eInstruction software Response is being continued and works in parallel with Turning software.

This page is a review of the hardware clicker CPS Pulse and the accompanying software Response v6.71 (12/2012) and it update v6.74 (04/2014). The software appears to be mostly in Java and thus runs on Windows, Mac, and Linux. I'm testing on a Mac, so the comments may not extend to the other run-time environments.

I just tested Powerpoint2016 for the Mac and whether it works with Response. No luck. Powerpoint 2016 appears to have a general problem with remembering add-ins. After adding the Response .ppa nothing happens. Opening a presentation with clicker questions ignores the additional data. Stick with Office2011. If you use Response+clickers it's not worth the minor improvements of the Office update (layout, retina support). --- JS 08:24, 19 November 2015 (EST)

eInstruction, the makers of Response have been bought by Turning technologies. This, according to a local salesperson, means development of Response has stopped. Instead the software team of the recently fused company will focus on other programs including Flow.

After deleting the Response preference file (Applications/eInstruction/Response/Prefs.ps) the Powerpoint plugin finally started working (screenshot). Using the plugin instead of Response, the clicker software also no longer forces an unwanted exit from the PPT Presenter Mode. The Response window is still badly designed (see screenshot) - my major issue with the software. The installation is still as needlessly cluttered as in the previous version, leaving files all over the computer. It still too many steps from creating a quick quiz since too many options that most lecturers won't use have to be set/skipped, e.g. when setting up the class.

The PRS Add-in slows down Powerpoint 14.3.7 on a OS 10.9.4 MBP Pro Retina test system. Thumbnail generation for a 20 slide presentation takes over 10s versus 1-2 seconds with deactivated plugin.

(These reports are all for Response on OS X)