Chemotaxis and its role in directing engineered tissue development, by Julie Boshar

Figure 1. Neutrophils are brought to an infection site via chemotaxis [4]

Chemotaxis is the directional migration of cells in response to chemical stimuli or external cues [1]. Cell motility is vital in many physiological and pathological settings such as wound healing, cancer metastasis, and tissue remodeling, and it is a central phenomenon in reproduction, development, organ patterning, mobilization, and homing of stem and progenitor cells [1, 2]. The initiation of cell migration is largely due to intrinsic polarization of actin filaments; however, the intercellular mechanisms involved in a cell’s decision to polarize are not well defined [1, 3]. Motility becomes strongest when a cell is polarized and experiences a chemical stimuli. This non-uniform stimulation allows the cell to maintain persistent motility. The chemical stimulus, or external cues, that a cell receives serve to activate surface receptors that transmit signals to the cytoskeleton to induce changes in cell shape and morphology. The cell’s front-to-tail polarization allows it to move up the concentration gradient of the external stimuli in a four step locomotion process, as seen in Figure 3 [1]. In this regard, the external stimuli is known as a chemoattractant and induces positive chemotaxis in which the cell moves from low to high concentration of the chemoattractant. Figure 1 illustrates this process as a neutrophil travels toward the high concentration of chemoattractant in the site of infection [1, 4]. Alternatively, cells recognize toxic stimuli, known as chemorepellents, and exhibit negative chemotaxis by moving away from the concentration gradient [1]. Cell migration on 2D substrates has been well characterized; however, motion in 3D systems is challenging because there is currently limited knowledge in the area of controlling growth factor gradients [2, 5]. Both positive and negative chemotaxis are important to understanding and engineering cell motion in relation to tissue engineering in human systems. 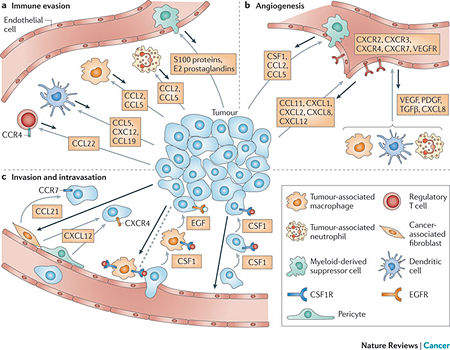 Figure 2. A depiction of how chemotaxis serves to shape the tumor microenvironment in cancer [5]

Current strategies to direct, manipulate, and study cell migration in vitro and in vivo are limited, and in vitro experimentation must be improved to allow for experimental variables to reflect conditions in vivo [6, 7]. Directional migration is innate to all cells and it is crucial to expand the current state of engineering cell migration [6]. In cancer metastasis, cell migration drives the invasion of tumor cells into the surrounding tissue and the spreading to other organs, as seen in Figure 2 [2, 5]. Up to 90% of all cancer related deaths are caused by metastasis, rather than the primary tumor [2]. Figure 2 illustrates three events that are affected by chemotaxis within the tumor microenvironment: immune evasion, angiogenesis, and invasion and dissemination. In immune evasion (Fig. 2a), regulatory T cells suppress auto-reactive T cells. They express chemokine receptor CCR4 which can cause the chemokine ligand CCL22 to bind and direct cell migration towards the tumor. Monocyte precursor cells are also attracted by ligands CCL2 and CCL5. These ligands lead to non-responsive T cells and further cell migration to the tumor. Angiogenesis (Fig. 2b) fuels tumor growth and metastasis. Chemokine receptors CXCR2, CXCR3, CXCR4, and CXCR7 induce endothelial cell chemotaxis toward the tumor. Invasion of the tumor and dissemination (Fig. 2c) to other organs involve chemokines CXCR4 and CCR7. Cancer cells with these chemokines can migrate towards and bind ligands CXCL12 and CCL21, respectively. These cancer driving chemotactic pathways are well-characterized and currently being exploited with the goal of develop oncologic therapies [5].

During development, cell migration is key in shaping the growing embryo and in mature organisms, it is crucial for wound healing and tissue repair [2]. Chemotaxis is vital to improving tissue engineered constructs for optimal wound recovery [7]. Complex wounds that require clinical reconstruction lead to hundreds of millions of dollars in health care expenditure annually. In addition, such reconstruction processes (via grafting techniques) can be painful for the patient and are not always successful [8]. Growth factors have been used in the clinic to control tissue growth; however, current techniques employ intravenous delivery or bolus injection which are unlocalized treatment strategies and have not been largely successful. Biodegradable delivery devices are favorable methods of delivery because they minimize negative side effects from additional surgeries to remove the device. However, attaining proper release kinetics of multiple factors is a challenge even when polymers are used in conjugation for delivery [5]. Understanding chemotaxis in these and other environments can lead to improved health and bioengineered systems [6]. Current biotechnological platforms for studying chemotactic responses will likely aid in the development of animal models for future research [9].

1676-1703: Antoine van Leeuwenhoek observes the bacteria in pepper-water and uses microscopy to study their motion [10].

1881: Theodor Wilhelm Engelmann observes the movement of bacteria in the presence of oxygen gradients and their aggregation in high oxygen concentration regions microscopically [10].

1884: Wilhelm Pfeffer varies the concentration of chemical attractants in solutions containing bacteria and observes that substances can behave as attractants or repellants [10].

1888: Pfeffer determines that the best bacterial attractants are potassium salts and peptone [10].

1906: Herbert Jennings and J.R. Crosby determine that optimal oxygen concentrations exist and cells are attracted to these regions [10].

1953: Henry Harris develops chemotaxis assays to visualize the movement of cells at the University of Oxford [12].

2006: Dr. Dennis Bray of the University of Cambridge is awarded the prestigious Microsoft European Science Award for his work involving computational tools to study chemotaxis in E. coli [13].

Figure 3. The locomotion process of chemotaxis [15]

Cells have been known to move in the absence of external cues by random walk for many years. This process involves a cell’s formation of sequential dendritic pseudopodial protrusions which allow for motion that is reminiscent of ice skating [1, 14]. Conversely, chemotaxis is a continuous motion in which the polarized cell experiences protrusion, adhesion, traction, deadhesion, and retraction, as seen in Figure 3 [1, 15]. The Rho family proteins guanine triphosphate binding proteins (GTPases) are key regulators of protrusion formation. Rac, Cdc42, and RhoG are required GTPases for protrusion [3]. Protrusion is the forward movement of the leading cell membrane due to asymmetric actin polymerization [1, 5]. The actin cytoskeleton in the protrusions forms linkages with the extracellular matrix (ECM) which causes the cell to adhere to the substrate and move the leading edge along [1]. These adhesions stabilize the protrusions [3].Contractile forces generated by the myosin II molecular motor facilitates translocation of the cell through traction. Rear detachment and tail retraction complete one cycle of locomotion [1]. 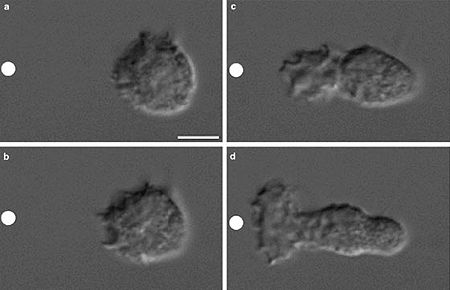 Cell migration on scaffolds can be directed by chemical, adhesive, mechanical, and topographical cues [16]. Cells can sense extracellular chemical gradients and experience positive or negative chemotaxis. The type of chemotactic response is dictated by the nature of the imposed chemical gradient. Chemical gradients will induce different behavior in cell types of varying kind (i.e. endothelial, neutrophils, & cancer cells). For example, vascular endothelial growth factor A (VEGFA) and fibroblast growth factor 2 (FGF2) are two chemoattractants that guide endothelial cells to form blood vessels during angiogenesis [9]. Table 1 lists some of the most commonly used chemoattractants for tissue engineering purposes [17]. Figure 4 depicts the motion of neutrophils over time towards the chemoattractant source. In this experiment, the chemotactic peptide N-formymethionine-leucyl-phenylalanine (FMLP) induces neutrophil motility [18].

The following five biological factors are needed in varying concentrations for optimal wound healing: basic fibroflast growth factor (bFGF), platelet derived growth factor (PDGF), VEGF, transforming growth factor-β (TGF-β), matrix metalloproteinase-2 (MMP-2). These factors are required in a multitude of different concentrations over time which makes it a complicated task to mimic these complex profiles in tissue engineering; altered quantities and combinations of chemoattractants can be used (note the wide array of factors that have wound healing applications in the table below) [17].

Chemotactic growth factor gradients can also cause cells to become nonmigratory depending on the gradient’s shape. Additionally, cells can sense changes in the steepness of chemical gradients and chemotaxis will slow down once cells have reached the high end of such a gradient [9]. Different isoforms of chemoattractants can cause altered effects, such as isoforms of VEGF which can inhibit angiogenesis [17].

Chemorepellents were first identified by Pfeffer in bacteria as free acids, alkalis, and ethyl alcohol, and they vary widely and are less well-characterized for different cell types [10]. Pertussis toxin has been shown to cause chemorepulsion in lymphocytes and neutrophils due to its ability to ADP-ribolysate and inactivate some GTPases [19, 20].

Table 1. Some of the most commonly used chemoattractants in tissue engineering [17]. 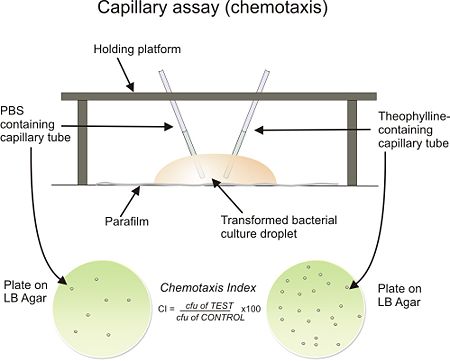 Various visualization assays to observe chemotaxis and screen chemoattractants exist. Such methods allow for the determination of the chemotaxis index (CI), which is a ratio of the number of cells that follow the chemical gradient to the chemoattractant source to the number of cells attracted when no chemoattractant is present (control) [21]. The Boyden chamber assay (similar to the modern Transwell assay) is a useful screening assay that can be used for multiple experiments simultaneously. This two chamber assay allows for quantitative determination (by use of staining the plate and using a plate reader) of cell migration from the upper chamber to the chemoattractant filled lower chamber. Bridge chambers (also known as Dunn chambers) allow cells that are plated onto thin cover slips to interact with chemoattractants by diffusion in a small microfluidic-like environment [22]. The capillary assay is a third technique in which two chambers are used to measure chemotaxis via the presence of chemoattractant gradients and the control. In this method, cells are suspended in medium that does not support growth (i.e. PBS) and capillary tubes containing a chemoattractant and a control medium are inserted into the apparatus. This set up can be seen in Figure 5 [21, 23]. The cells migrate into the capillary tubes accordingly and can be quantified by serial dilution and plating [23]. The agar plate method is a widely used visualization technique in which agar that contains one or more chemoattractants is plated and cells are inoculated at the center of the plate. Migration bands indicate the movement of cells as a result of the concentration gradient of the chemoattractant that is present [24].

A large goal in tissue engineering and regenerative medicine is to create bioengineered constructs to allow for regeneration of tissue, as compared to grafting techniques. Hokugo et al. developed a chemotactic scaffold to serve this purpose using human mesenchymal stem cells (hMSCs) and VEGF. They hypothesized that hMSCs would “home in” on a wounded site by chemotaxis that is induced by a VEGF concentration gradient. A two chamber Transwell assay was used to verify that VEGF behaves as a strong chemattractant for hMSCs. Smart Scaffolds made of apatite coated poly(lactic-co-glycolic acid) were seeded with VEGF-transduced hMSCs and implanted into the backs of male nude mice; scaffolds with unmodified hMSCs and no hMSCs were two other conditions examined. Many more capillaries were observed in the VEGF-hMSC scaffolds than in the hMSC scaffolds, and no capillaries were produced in the control scaffolds. To assess chemotactic potential of the VEGF-hMSC construct, hMSCs were tagged with 1,1-dioctadecyl-3,3,3,3-tetramethylindotricarbocyanine iodide and injected into the frontal region of mice. After 7 days, fluorescent imaging revealed that all hMSCs had accumulated within the Smart Scaffolds in the backs of the mice. This work indicates that VEGF is an important component in hMSC homing and presents an important platform for future clinical applications in the field of bone graft substitutes [8].

Cellular migration by chemotaxis plays a fundamental role in sustaining life. It relies heavily on the complex regulation of polarization, chemical stimulus, and receptors and internal signaling. Chemoattractants are being used in tissue engineering to promote optimal wound healing through integration into biocompatible scaffolds and to minimize negative immune responses to angiogenic procedures. Advancements in 3D modeling and understanding the mechanisms by which cells respond to chemical gradients will allow for improved cellular regulation where it is needed. Additionally, further chemokine research seems promising of new therapeutic strategies to treating multiple sclerosis and brain tumors [25].