Systems biology is an academic field that seeks to integrate different levels of information to understand how biological systems function. By studying the relationships and interactions between various parts of a biological system (e.g. metabolic pathways, organelles, cells, physiological systems, organisms etc.) it is hoped that eventually an understandable model of the whole system can be developed. --- from Wikipedia

The systems approach is not new, even to biology. However, the level of abstraction has changed phenomenally in the post-genomic era, with the explosion of data. Also, the complexity of the system was discouraging in the past, which has now been dispelled to an extent with the development of powerful computational techniques. The response of systems to perturbations (natural, such as SNPs and mutagenesis) as well as introduction of a drug is of particular interest in systems biology.

At the Chandra lab, we look to address the problem of drug discovery from a systems perspective. Systems biology, in drug discovery, promises to identify newer drug targets and identify more efficacious drugs, with fewer side effects. Metabolic analysis is of immense importance in drug design, quoting Cornish-Bowden: 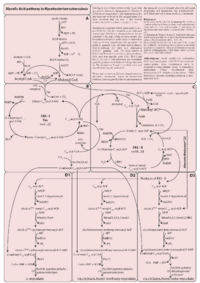 We have applied Flux Balance Analysis (FBA) and Minimisation of Metabolic Adjustment (MoMA) for the analysis of the Mycobacterium tuberculosis mycolic acid biosynthesis pathway and identified six new potential drug targets based on this analysis. Systems biology affords the modelling of systems at various hierarchies to make appropriate predictions and form hypotheses. We have curated a comprehensive model of mycolic acid synthesis in M. tuberculosis, involving 197 metabolites participating in 219 reactions catalysed by 28 proteins. FBA has provided insights into the metabolic capabilities of the pathway. In silico systematic gene deletions and inhibition of InhA by isoniazid, studied here, provide clues about proteins essential for the pathway and hence lead to a rational identification of possible drug targets. Proteins identified as essential by FBA correlate well with those previously identified experimentally through transposon site hybridisation mutagenesis. This study demonstrates the application of FBA for rational identification of potential anti-tubercular drug targets, which can indeed be a general strategy in drug design. Original Paper: K. Raman, P. Rajagopalan, and N. Chandra. Flux balance analysis of mycolic acid pathway: targets for anti-tubercular drugs. PLoS Comput Biol, 1(5):e46, Oct 2005 PMID 16261191