One major topic of interest in the field of tissue engineering is the implantation of tissue constructs in situ, at sites of injury, disease or weakness. Before the 1990’s, the dominating design for implantable tissue constructs was three dimensional biodegradable polymer scaffolding. This design used a polymer scaffold as a frame into which cells could be injected. While many tissue regeneration therapies to this day successfully utilize these scaffolds, a few major flaws in the design have prohibited its application to certain areas of the body. These limitations provided the motivation behind the engineering of a more versatile and efficient tissue therapy. The best design to emerge from this inquiry was the cell sheet design. 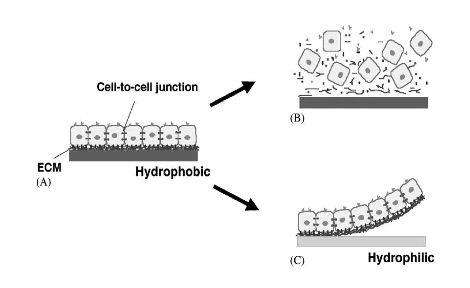 Figure 1: (A) PIPAAm cultured cells at 37°C (B) Trypsin digestion results in a slurry of cells and cleaved junction proteins (C) Adding water and cooling the culture to 32°C results in a cell sheet supported by intact cell-cell and cell-ECM adhesion proteins [2]

It is likely that many tissue engineers hypothesized the idea of harvesting a sheet of cells as one, well before it was first accomplished. The actual success of producing a cell sheet did not, however, become a reality until the discovery of thermo-responsive polymer surface technology in 1990 [1]. This discovery was motivated by the biggest flaw of cell injection therapy, the use of trypsin to separate cells from polymeric culture surfaces. While trypsin, a hydrolyzing protease, is effective in breaking down cell-surface adhesions, it also breaks down cell-cell adhesions and hydrolyzes cell membrane proteins, decreasing cell functionality [1]. Thermo-responsive polymer surface technology allows for the detachment of cells from their polymer surface without compromising cell function. This is possible because the polymer itself experiences a change in its attraction to water molecules as temperature changes over a certain range. Poly(N-isopropylacrylamide) (PIPAAm) is the most notable polymer utilized for this type of cell harvesting. At a temperature of 37°C, PIPAAm is hydrophobic, leaving its binding sites open for cell adhesion. A drop of only 5°C results in hydrophilic polymer behavior, pulling in water molecules which compete with the cells for binding [3]. This hydrophilicity is very strong, causing PIPAAm to absorb water and swell, releasing its bound cells. Alongside the experiments that proved this, it was noted that cells harvested from PIPAAm maintained cell to cell adhesions [1]. This is contrary to the case of trypsin digestion, as all adhesion proteins are broken down by the protease. The differences between the two cell harvesting techniques are illustrated in Figure 1.

Particular tissues in the body which are best repaired by cell sheets are dense and/or sensitive tissues. Dense tissues, such as myocardium, the muscular tissue of the heart, tend to reject robust implanted scaffolds. Cell slurries within these scaffolds are also not easily integrated into the existing tissue. This is especially true for heart tissue, as it experiences large amounts of stress and strain. Sensitive tissues benefit from cell sheet therapy greatly because the size and shape of each sheet can be manipulated. Cultures naturally form to the shape of the surface they are bound to [4]. 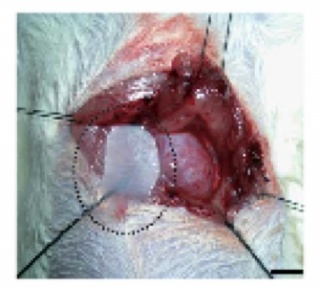 Figure 2: Cell Sheet applied to the heart of a sheep [4]

The myocardium is made up of cells called cardiomyocytes. These cells do not readily proliferate to repair surrounding tissue damages, thus rendering most untreated heart tissue damages permanent. Myocardial infarction (MI), also known as heart attack, is one of the leading causes of heart failure [3]. MI occurs when blood supply to the myocardium itself is inhibited, causing the tissue to die. With constant stress and strain being applied during each heartbeat, it is often critical to replace the weak tissue. Currently, this is most commonly done by heart transplantation. The problem with this is that the number of organ donors is not nearly enough to support the growing number of heart attack patients, especially in the United States. The use of cell sheets offers a means of providing viable cells that can patch over the damaged tissue and also proliferate. Adipose tissue-derived mesenchymal stem cells (ADMSCs) are manipulated in vitro to create cardiomyocyte-like cells (CLCs) which comprise the cell sheets [5]. These stem cells can come from the patient, creating less of a chance of rejection. The cell sheet is placed onto the site of MI and allowed to take hold on the surface without the use of sutures, as shown in Figure 2 [4].

Figure 3: Before and after photos of corneas treated by oral muscosal epithelium cell sheets [6]

The eye is one of the most sensitive organs in the body. The cornea is the final layer of protection between the eye and the surrounding atmosphere. One major problem that occurs in ocular tissue like the cornea is neovascularization [6]. In the worst cases of neovascularization, the cornea must be reconstructed. The newest approach to this is by oral mucosal epitehlium cell sheet implantation in place of the damaged cornea (Figure 3) [6]. The following is an abbreviated video of the processes video [7].

The tensile strength required to aid in the healing of bone tissue is out of the range of any 3D polymer scaffold [7]. The limited cell functionality within a scaffold as a result of trypsin's cell toxicity also fails to promote regeneration of bone tissue at sites of nonunion. Cell sheets have proven to solve both of these issues, providing healthy, proliferating cells, and withstanding enough tensile force to maintain structural integrity. Cell sheets are wrapped around the site of nonunion providing an even distribution of cell therapy and allowing the bone to heal (Figure 4) [7].