What is cell adhesion?

Cell adhesion is the attachment of cells to either other neighboring cells or the extracellular matrix (ECM). Cell adhesion is required for the formation of tissues & the integrated behavior of systems[1]. Tight-junction, gap-junction, cell-cell junction, cell-matrix junctions are all examples of different types of adhesion and each serve a unique purpose. Tight junctions are used for the connection of epithelial cells to form a waterproof skin barrier, while gap-junctions are primarily for the transfer of small molecules in cell signaling. Cell-cell junctions as well as cell-matrix junctions are needed for structural purposes of holding cells together [2]. Cell-matrix adhesions take place using a focal adhesion complex, which is a cluster of molecules [3]. This method of adhesion requires several active players including cell adhesion molecules (CAMs), adapter proteins,as well as a bundle of cytoskeletal filaments for attachment to ECM. It is important to recall that the ECM is the main structural component of tissues. During and after adhesion, the cell is able to retain its structure and therefore function. This is made possible by the cytoskeleton of the cell while integrins coalesce with additional proteins to forms channels for communication with neighboring cells and the ECM.

It is precisely the cell’s communication with its extracellular environment that allows it to successfully perform many of its important cellular duties. As such, proper attachment is a prerequisite of functioning signaling pathways that are necessary in processes like differentiation, migration, and tissue organization, wound healing, and also homeostatic activities [2]. Cell adhesion is a routine biological operation that is constantly happening in all tissues of the body, making it an important area of study. Increasingly, adhesive properties of different materials for different applications is a major concern as technology in the field of biomaterials advances. A lack of consideration of such properties could have extremely detrimental consequences for the patient such as blood clotting [5]! As research and engineering medicine continue to improve, it is critical for engineers to consider the adhesive properties and mechanisms of cells. 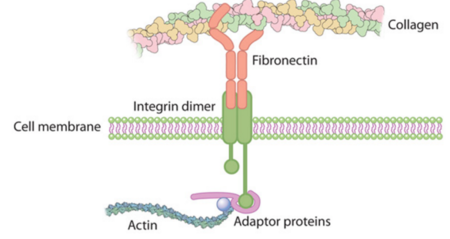 Role of Integrins & Other CAMs

Vital proteins located in the membrane of cells which work to mediate cell-cell binding. These proteins can be grouped into 5 major classes: integrins, cadherins, selectins, immunoglobulin (Ig) superfamily, and mucins. Some are reliant on Ca2+ for function. However, integrins, the principle CAMs responsible for cell-matrix binding do not rely on Ca2+ and are said to be calcium-independent. The purpose of integrins is to bind ligands, which are located in the ECM to the cell through a mechanochemical pathway [6].

Integrins are heterodimeric transmembrane glycoproteins. In mammals, there are 18 known alpha subunits and 8 known beta subunits that can form 24 different heterodimers. Integrins are comprised of 1 alpha and 1 beta subunit, connected at the N termini, causing them to have multiple functional regions spanning the cell membrane [7]. The extracellular domain, sometimes referred to as the head region, is used to bind directly to substrates outside of the cell. These substrates may include glycoproteins, collagens, fibronectins, or any other nearby structures in the ECM [8]. They may also bind to similar receptors of neighboring cells. These neighbors are able to communicate messages regarding migration and cell spreading via these integrin channels during outside-in signaling [2]. The opposite type of signaling, inside-out, is also possible where internal signals act through integrin channels to alter the activity of the ligand binding complex [2]. Due to the fact that integrins, proteins, do not have enzyme activity, a number of additional cells are recruited to the adhesion sites in order to facilitate signaling. These additional cells can be categorized as being either integrin binding proteins, scaffolding proteins, or enzymes.

The Process of in vitro Cell Adhesion to ECM:

Figure 2. The phases of cell adhesion in vitro [9]

The process of in vitro cell adhesion occurs in 3 primary phases. First, the cell attaches to substrate, which in some instances is a neighboring cell. The first point of contact is established by a receptor-ligand pair and is integrin mediated. Next, the cell flattens along the surface of the substrate, bringing the transmembrane integrin proteins in contact with the surface that the cell aims to attach to [9]. Over time, additional receptor-ligands come into contact and form connections, thus enhancing the strength of the adhesion between the cell and the substrate. During this process of adhesion, the cell prepares internally for communication with its surroundings by organizing structures like actin. Finally, the cell will begin spreading its actin skeleton to the edges of the cell in an effort to further the boundaries of the cell. This structural reorganization enables cells to make the maximum number of bonds to the substrate surface and thus achieve stable adhesion [9].

The Process of in vivo Cell Adhesion to ECM:

Figure 3. Phases of in vivo cell attachment including “docking” and “locking” [9]

The process of adhesion in vivo is very similar to that in vitro, but involves a number of additional concerns due to the physiological setting. Namely, the shear forces of fluid flows in the body can prove disruptive to the binding process [9]. In vivo adhesion is also characterized by three distinct steps as the cells become fully flattened and securely attached to the ECM. These steps include rolling, activation, and arrest. The rolling is mediated by selectin molecules [9]. Activation and arrest mirror the process for in vitro attachment where receptors on the cell surface are stimulated to initiate attachment and thus create adhesion. These steps together form the “docking” phase of cell attachment in vivo where cells come in contact and hold to the ECM [9]. Following docking is the “locking” stage in which cells rely on integrins to fully arrest cell movement and establish stable adhesion [9].

Individuals with leukocyte adhesion deficiency do not have beta-2 integrin precursor due to a mutation in the INTG2 gene and, as such, are unable to bind leukocytes to blood vessel walls. This prevents the body from having an appropriate immune response to an infection and can be life threatening if the patient contracts a dangerous infection. Symptoms of this rare recessive disease which affects approximately 1 in one million individuals include long periods of infection, wound healing, and often death at a young age. Patients also suffer from ulcerations across the body as well as periodontitis [10]. Though bone marrow transplants and aggressive courses of can be used to combat the immunodeficiency, success has been shown to be limited. [10,11]

Perhaps most notably, cell adhesion plays a vital role in cancer metastasis. Cancer is spread when cells detach from their intended location and migrate to another region in the body before reattaching there [12]. This entire process is controlled by cell adhesion and cell-matrix communication. When these systems break down, cancer is allowed to proliferate within the body, making it a deadly disease that claims the lives of nearly 600,000 Americans per year [13]. Clinical trials performed on mice in 1996 by Dowling et al. showed that mice who are born without alpha 6 or beta4 integrins suffer severe skin blistering and lack a structural component of the skin called hemidesmosomes. Due to the developmental inability to properly anchor their skin, the mice died soon after birth [6]. A similar phenomenon has been observed in humans who has a mutation in the very same integrin genes. The autosomal recessive disorder causes epidermal blisters [6].

1907: Harrison shows that tissues are made of individual cells.

1930’s: Holtfreter (German American) shows that embryonic tissues can form and reform with a high degree of self organization, indicating differentiation and communication between cells.

1950’s: Moscona (American developmental biologist from Israel) was a faculty member at the University of Chicago who, into the 1960’s, used enzymes to separate embryonic cells and then observe their reassembly. This process indicated to the scientific community that cells are capable of self organization by some sort of sorting mechanism. This work lead to the discovery of cadherins, a type of CAM molecule.

Paul Alfred Weiss (Austrian biologist) and colleagues Tyler and Sperry considered the work that came before them on a smaller scale. They hypothesized that adhesion mechanisms are similar to antigen-antibody interactions.

1960’s - trials with cancer cells are begun to understand the disruption of the adhesive process during tumorigenesis.

Gerisch used Fab fragments of antibodies to block the re-assembly of dissociated proteins.

Next, several more families of cadherins and cell-cell communication methods were discovered.

Cell culture made it possible for scientists to study the effects of cell migration and better understand cell - matrix interactions.

Integrins were discovered with both methods (biochemical & immunological).

There are a number of clinical trials ongoing or scheduled that deal with cell adhesion. Specifically, one trial that is in the recruiting phase now (February 2017) aims to examine pancreatic cancer volunteers compared to healthy volunteers in an attempt to isolate overactive integrin complexes that may be contributing to the disease. If the trial is successful, the researchers aim to develop a treatment which would effectively inhibit the action of these particular integrins [15].

[12] Metastasis of colorectal cancer; Springer: Place of publication not identified, 2013.