In this study, we measured a wide range of termination efficiencies among our set of terminators, from a high of 98.4% to a low of –106.0%. (Table 2). Of the single terminators, B0013 had the highest forward termination efficiency (60.0 %) but the lowest reverse efficiency (–106.0%). The sequence of B0013 was derived from the TE terminator of bacteriophage T7 and engineered to be bidirectional by inserting six adenine residues on the 5’ side of the hairpin sequence and mutating two additional residues to thymine in the sequence on the 3’ side of the hairpin. Compared to the wild-type TE terminator (B0012) rational engineering efforts in the design of B0013 improved the forward termination efficiency but worsened the reverse efficiency.

The other single terminator that we characterized was B0011, a terminator derived from the luxICDABEG operon of Vibrio fischeri and predicted to be bidirectional. B0011 had the highest combined forward and reverse termination efficiencies of the single terminators, and was thus designated a “working” part in the Registry of Standard Biological Parts.

The negative termination efficiencies measured for B0022 and B0023 may represent unpredicted promoter activity of these parts. Alternatively, the insertion of an ineffective terminator hairpin in the middle of a polycistronic transcript expressing CFP and YFP might stabilize the YFP transcript relative to that produced from the no terminator control, resulting in the production of more YFP per mRNA and thus a negative measured termination efficiency.

Variability in CFP expression between constructs and decreased CFP expression in the dual fluorophore constructs compared to the CFP only control suggest that high levels of transcript expression are saturating ribosomal translation capacity. (Fig. 2). Because our constructs are expressed from a high copy (100-500) plasmid and a relatively strong promoter, high levels of transcript production are expected. However, such a translation bottleneck might affect the correlation of protein and mRNA levels and reduce the fidelity of our surrogate measurement.

This work represents a first pass at characterization of transcriptional terminators as standard biological parts. We attempted to measure the forward and reverse termination efficiencies of five terminators from the expression ratio of two reporter genes, encoded upstream and downstream of the terminator of interest. Using reporter protein fluorescence to infer relative transcription levels assumes that the mRNA stability and translation rates are insensitive to variations in the terminator sequence and performance. This assumption was not tested in this study. A subsequent generation of terminator characterization experiments conducted by Jason Kelly partially addressed these concerns by flanking reporter coding regions with hairpins and RNase E sites to provide transcript stability and independence.

Subsequent characterization of transcriptional terminators has substantially improved on this work in four ways. (1) As discussed above, our characterization fails to address issues of mRNA stability and translation rates. (2) The growth conditions used in this study were chosen somewhat arbitrarily and may not represent optimal characterization conditions. For example, the use of LB rather than a defined medium and (more gravely) the decision to assay the samples at the imprecise phase of late log growth may limit the repeatability of this experiment. (3) The initial analysis of this data in terms of average termination efficiency fails to fully exploit the potential of flow cytometry data. A more sophisticated analysis could determine the distribution of single-cell termination efficiencies. (4) By assaying our constructs only at a single level of transcription induction, we failed to explore the dependence of termination efficiency on the rate of PoPS input to the construct. We leave it to this later work to comment on the extent of agreement between our measured termination efficiencies. 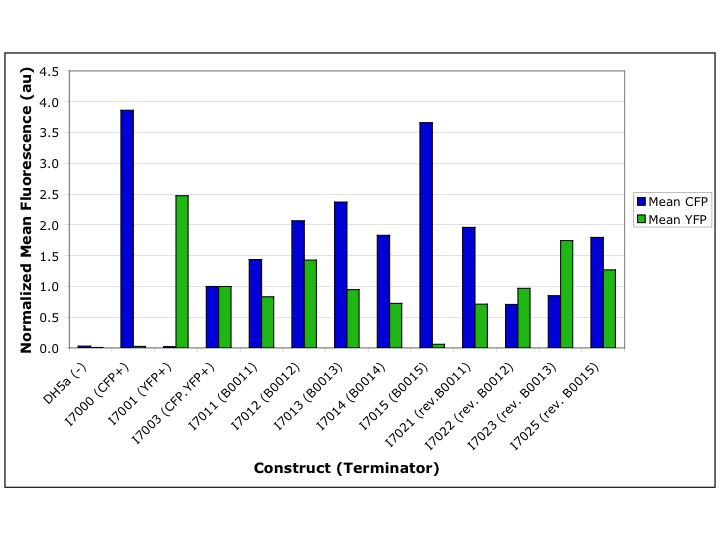