To ensure their survival, cells have evolved mechanisms by which they both monitor genome integrity and repair damage. The most dangerous type of DNA damage is double stranded breaks (DSB) which can be caused by endogenously generated oxygen radicals, replication forks encountering single stranded DNA breaks or other DNA lesions, or exogenous agents such as ionizing radiation or chemotherapeutic drugs [3]. There are two main options for repairing a DSB: homologous recombination (HR) and non-homologous end joining (NHEJ) [3]. The focus of this paper is proteins, specifically RecA and SSB, involved in homologous recombination in E. coli. 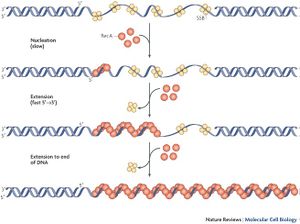 Diagram of the replacement of SSB protein with RecA [5]

RecA is a 38kDA ATPase, a class of enzymes that catalyze the hydrolysis of ATP, found in Escherichia coli that is essential for DNA repair and maintenance [2].

In order to function, the must bind at the site of DNA damage. This occurs in two distinct stages:

ATP and ssDNA bind at the RecA-RecA interface cooperatively; together, the complex forms a helical filament which binds dsDNA, searches for homology, and then catalyses strand exchange [2].

In E. coli, the single-stranded DNA-binding protein (SSB) is homotetramer consisting of 18,843 kDa subunits which binds tightly and cooperatively to ssDNA. It is involved in most aspects of DNA manipulation: replication, repair, and recombination. Its functions include prevention of reannealing of ssDNA, protection of ssDNA from nuclease digestion, enhancement of helix destabilization by DNA helicases, primosome assembly, enhancement of replication fidelity [4].

In DNA damage, SSB is involved in induction of the SOS response and recombination repair. During recombination, SSB promotes he binding of RecA protein and strand uptake [4].

The purpose of this study is to develop methods to visualize and to define the different stages of the binding of RecA to a SSB coated ssDNA molecule. By adjusting the conditions in which the RecA-ssDNA filament formation occurs, the researchers hope to better understand the mechanisms and rates of this process and roles of various compounds and mediators play in RecA-ssDNA filament formation. 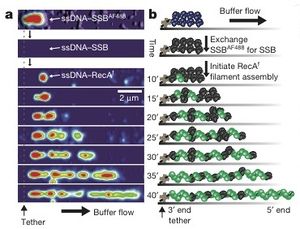 Figure 1: a) visualization of ssDNA using TIRF microscopy b) Schematic representation of what is visualized in panel a [1] 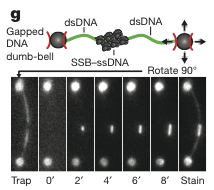 Figure 4g: Top panel is a schematic of the DNA/bead/trap/SSB used and bottom panel is the visualization of the system using the fluorescent microscope [1]

In order to visualized ssDNA, researchers tagged the 3’ ends of bacteriophage lambda DNA (48.5 kb) with biotin. Then, they denatured it into single strands before coating the strands with fluorescence tagged single strand binding protein (SSB). These coated ssDNA was then attached to a glass cover slip covered with streptavidin, a protein which binds strongly to the biotin tag, of a flow chamber. They where then able to visualize the coated strand using total internal reflection fluorescence (TIRF) microscopy (Figure 1a/b, top panel). The tagged SSB was then replaced with wildtype SSB (Figure 1a/b, second panel). The researchers were then able to flow solutions containing fluorescent RecA protein, fluorescein-RecA, through the chamber, over the ssDNA and visualize the binding of RecA to the tethered ssDNA (Figure 1a/b, remaining panels).

To visualize RecA filament formation in a more biologically correct system, the researchers generated dsDNA with a ssDNA gap of 8 kilobases with biotin tags on either end. Using microfluidic flow cell in combination with a split beam optical trap and a fluorescent microscope. They bound either end of a single gapped DNA molecule to streptavidin coated beads (Figure 4g, top panel). The optical trap was used to rotate the DNA perpendicular to the flow and to dip the strand into the reaction chamber. The binding of the molecules was measured using the fluorescent microscope (Figure 4g, bottom panel).

In this study, a method to directly image the formation of the RecA-ssDNA filament was developed (see methods for details). Using this visualization technique, the nucleation rate of RecA on a SSB coated ssDNA molecule was measured. The researchers plotted nucleation rates at different concentrations of RecA ranging from 100nM to 450 nM (Figure 1d, below) and concluded that the nucleation rate increased linearly with time. When the same experiment was conducted in the presence of ATP and ATP-γ-S, the relation ceased to be linear, fitting a curve J=k[RecA]n (J=frequency of nucleation, k= rate constant, and n=number of protomers in a set length of DNA)(Figure1e below).

Since individual clusters of bound RecA were visible (Figure 2a, in blue, red, and green), researchers were able to plot the growth of these clusters in order to establish a growth rate at various concentrations of RecA (Figure 2b) and extrapolate the lag time, or the time it takes for the nucleation to occur (Figure 2e). The exponential trend observed between lag time and RecA concentration in the presence of ATP-γ-S confirms that RecA filaments nucleate as dimmers and grow via addition of monomers (Fig. 2f)

After establishing a filament growth rate, the determined directionality of growth. First by completing the nucleation step with Cy3 tagged RecA (Figure 3b, second panel, red) and then using fluorescein-RecA (green) to track growth of those clusters (Figure 3 b and c), the results were then plotted against time (Figure 3d). Observations indicate that 5’→3’ direction was preferred, but that bidirectional growth was possible.

They then tested various conditions to see their effect on the nucleation and growth rates. The first condition was to adjust the concentration of magnesium acetate ([Me(Oac)2) which associates with ATP. As the concentration of Me(Oac)2 was increased the rate of nucleation increased (Figure 4a), but it had no effect on growth rate (Figure 4b) suggesting that the presence of Mg+-ATP cofactor is critical for increasing the rate of nucleation of RecA, but not in growth rate. The effects of ATP hydrolysis was tested using ATP, ATP-γ-S (an non-hydrolyzable analog), and dATP (a more readily hydrolysable version of ATP). In the presence of ATP-γ-S and dATP, the nucleation rate is 10-fold and 5-fold faster than with ATP (Figue 4c) suggesting that hydrolysis has not bearing on the stability of the filament. The growth rate was not statistically effected by ATP-γ-S or dATP compared to ATP (Figure 2d). These results suggest that ATP acts as a conformational regulator, increasing RecA protein’s affinity for ssDNA upon binding.

Next, the effect of mediator proteins were tested, specifically RecO, RecR, and RecF, genetically and biochemically established mediator proteins in “E. coli” [1]. They tested two combinations: the RecOR complex which interacts with SSB to mediate assembly in a structure-independent manner, and RecORF complex which acts at the junction of ssDNA and dsDNA [1]. To test the effect of these cofactors, a new set up was used described in the Methods section above and depicted in below in Figure 4g. In the presence of RecOR, the mean lag time decreased, some occurring in less time than RecA alone. The addition of RecF further decreased the mean lag time (Figure 4h). RecOR accelerated the growth rate but RecF had no effect (Figure 4i). 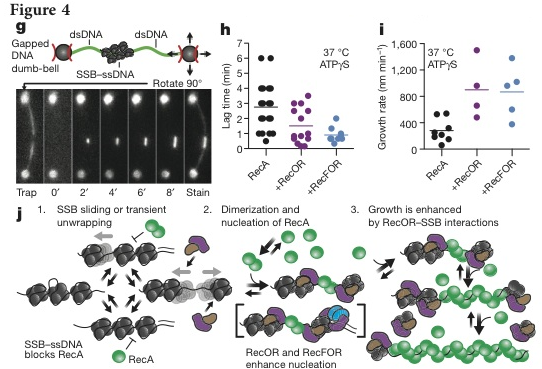 Based on these results, the researches created a model (Figure 4j) in which RecOR interacts with SSB to facilitate RecA assembly [1,7] by trapping transiently unbound ssDNA thus weakening the SSB-ssDNA binding and facilitating RecA binding [1].

The use of this approach to establish that mediators such as RecOR and RecF can effect the rate limiting step in biological processes such nucleation, enhance filament growth, or both suggests it may be applicable in other, similar systems. For exampled, it could be used to study the nucleation and growth of Rad51, the human othologue of RecA, and DNA filaments; the filament formation is regulated by BRCA2 which could be studies in a similar manner to the roles of RecOR and RecF. The technical approach could also be used to understand the role of RAD51 paralogues in recombination-mediated DNA repair [1].