Alkylation of bases can occur through normal metabolism as well as with chemical agents. Some of the earliest chemotherapeutic drugs were alkylating agents, and they remain useful tools in the arsenal against cancer. [1] O6-alkylguanosine is a common alkylation product that must be dealt with in cells through use of base excision repair (BER), nucleotide excision repair (NER), as well as alkyltransferase enzymes.[1] In this study, alkyltransferase-like proteins (ATL) were studied in Schizosaccharomyces pombe. These proteins have a similar catalytic pocket to alkyltransferase proteins, but lack the catalytic cysteine residue responsible for de-alkylation of the base.[2] The role of these proteins has not been studied in detail, although the defects associated with deletions of ATL in S. pombe were shown to be analogous to defects in the NER pathway, indicating that these proteins may be involved in this process. Two pathways of NER exist in S. pombe, global genome (GG) and transcription-coupled repair (TC), and the authors show that ATL has a distinct role to play in directing the decision between each pathway.[3]

Deletion mutants were made in S. pombe of GG-NER genes rhp23, rhp14, swi10, rhp41, and rhp7 and TC-NER gene rhp26 as well as atl1 and the homologous-recombination protein rad51. These were tested in a spot assay in which the yeast was grown in the presence of several alkylating agents. The alkylation ranged from addition of an O6 –methyl, -ethyl, -butyl, -benzyl group. Atl1 deletion was shown to be sensitive to MNNG (O6 –methylation) but not BNNG or BzNU which added a butyl or benzyl group respectively. In strains deficient in other NER proteins, there was a further defect with atl1 especially rhp26. However, upon double deletion of atl1 and rad51, there was sensitivity to both BzNU and BNNG, suggesting HR is a back-up pathway for Atl1 deficient cells. S phase progression of cells was monitored by arresting cells at G1 phase, then releasing and using the shift of the histogram to measure transition into S phase after a brief exposure to BzNU or MNNG. There was little difference in S phase delay of atl1 compared to wild type at low doses of MNNG, but at high doses wild type S phase progression was about an hour slower than atl1 deletion. High doses of BzNU completely halted replication, but at low doses of BzNU atl1 deletion the delay was about half that of wild type. [3]

Crystal structures were solved for Atl1 bound to oligodeoxyribonucleotides (ODNs) containing O6 -hydroxyethyl,-carboxymethyl, -propyl, and –benzyl guanine and compared to existing crystal structures. The authors observed that each damaged base was flipped outward, and the DNA was bent sharply (~45 degrees). The larger groups were able to make more extensive hydrophobic interactions with the binding pocket, which was suggestive of tighter binding compared with the smaller functional groups which were able to make fewer hydrophobic contacts and had only weak hydrogen bonding interactions. [3] 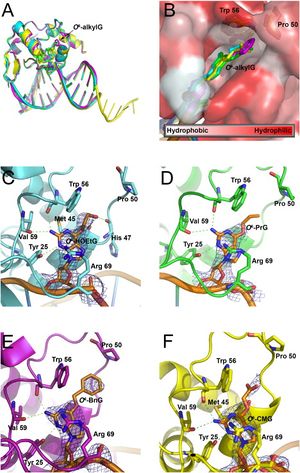 Crystal structures of Atl1 in complex with ODNs

Binding of Atl1 was first shown qualitatively using electrophoretic mobility shift assay and radiolabelled ODNs, and it was found to bind to damaged ODNs. In order to test binding of Atl1 to each of these ODNs, a biotin tag was attached to the 5’ end of each ODN and attached to a streptavidin coated microtiter plate. ELISA was used to determine an equilibrium binding constant of Atl1 for each of the ODNs. The detailed binding interaction between Atl1 and each of the ODNs was quantified using surface plasmon resonance. It was found that each ODN had a similar kon, but different koff rates. The bulkier groups showed slower dissociation from Atl1, indicating tighter binding. [3] 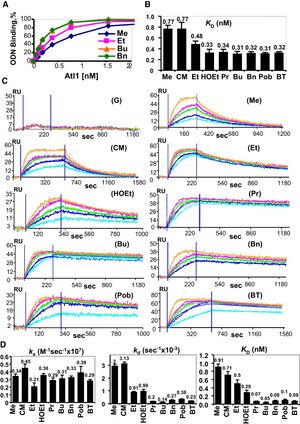 This study provided a detailed mechanism explaining the binding of Atl1 to both small and bulky O6-alkylguanines. The authors showed that smaller groups, like O6-methylguanine, had a Kd of binding of about 0.5-1.0 nM; whereas, bulky groups had a Kd of binding under 0.08 nM. According to their model, this looser binding of smaller alkyl groups allows Atl1 to target the global genome NER machinery to repair the damage. The larger groups, such as O6 –benzylguanine, bound so tightly to Atl1 and caused a blockage on DNA. The authors proposed that, in areas of transcription, the tightly bound complex blocks transcription machinery and targets the transcription-coupled NER machinery to repair the damage. In areas of little to no transcription, the replication machinery becomes blocked and cell cycle arrest is initiated or the cell dies if the damage remains unrepaired. This was a highly mechanistic study that incorporated structural biology as well as kinetics to characterize the behavior of Atl1 which previously had only been observed phenotypically. This mechanism may serve as a model that will be useful in other systems, and the future may uncover functional homologs in higher eukaryotes. [3] 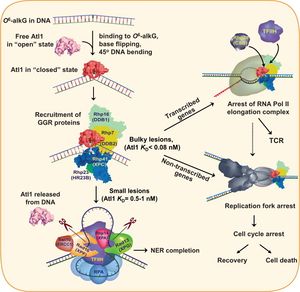