Activation of DSB processing requires phosphorylation of CtIP by ATR [1]

DNA double strand breaks can arise from a variety of exogenous sources such as ionizing radiation (IR), chemical agents, ultra-violet (UV) exposure or from endogenous sources such as reactive oxygen species formed during normal metabolism as well as collapsed replication forks. It is essential for cells to repair this damage as it is highly cytotoxic, and inefficient repair can cause the accumulation of mutation, chromosomal instability and cell death [2,3]. One of the major pathways to deal with DSBs is homologous recombination (HR) in which the MRN complex acts as a sensor to recognize DNA lesions and initiates a signaling cascade through activation of ATM kinase that leads to DNA repair factor recruitment, cell cycle checkpoint initiation, or apoptosis. [4-7] ATM kinase is closely related to ATR, another signaling kinase responsible for coordination of the DNA damage response (DDR). [8]

An important step in the initiation of HR is resection of the 5’ end to create long 3’ ssDNA overhangs that become coated in RPA ssDNA binding protein. There are three pathways responsible for DNA resection in HR. Exo1 is an exonuclease that has the ability to initiate resection and elongate resection for long stretches. [9] Mre11 of the MRN complex has endonucleolytic properties that in complex with CtIP can also initiate resection. [10] CtIP and MRN are particularly important in dealing with DNA ends that have blockages such as protein adducts like Spo11 capped meiotic DSBs. In fact, without CtIP or Mre11 cells are sensitive to topoisomerase poisons such as camptothecin (CPT) since they are unable to deal with the topoisomerase covalently attached to DNA. [11] DNA2 is an exonuclease that is incapable of initiating resection, but is responsible for long range resection in conjugation with BLM helicase activity. [12]

In this study, cell free extracts from Xenopus laevis eggs were used to study the DNA resection pathways. Low-speed supernatant (LSS) from these cell extracts contained soluble proteins and lipids and undergoes DNA replication. High-speed supernatant (HSS) is membrane free extract, does not allow DNA replication, and was found to be absent or had inactive Exo1. Both of these extracts still contained active protein that was able to perform DNA resection and repair of DSBs. In their initial studies of DNA resection in these extracts, the authors immunodepleted CtIP from LSS and found an inhibition of resection. Upon immunodepletion of Exo1, a similar effect was observed, but upon depletion of both CtIP and Exo1 resection was abrogated, indicating parallel pathways. DNA2 depletion abrogated resection as well. In HSS, however, CtIP depletion abrogated resection suggesting that the Exo1 pathway in this extract was inhibited or absent.

The authors found that upon addition of a phosphatase inhibitor, okadaic acid (OA) a species of CtIP was visible with slower mobility in an SDS-PAGE gel upon DNA damage than CtIP from damage-free extract. Upon addition of lambda phosphatase, the bands of CtIP collapsed to a single high mobility band indicating the mobility shift was due to phosphorylation. Upon addition of PIKK inhibitor, caffeine, the mobility retardation lessened, indicating that a member of PIKK was responsible for phosphorylation of CtIP. Knowing this, the authors decided to affinity purify Flag-CtIP from extract containing OA with and without DNA damage and analyzed these with tandem mass spectrometry to identify the residues that were phosphorylated. Two DSB induced sites of phosphorylation were of particular interest T200 and T818 since they were at TQ sites which is the target for the PIKK family of kinases. Of these T818 was evolutionarily conserved in yeast and humans, and was chosen for further study. An antibody was created specific to pT818. Small molecule inhibitors for ATM, ATR, and DNA-PK were used to probe lysates after DNA damage in the presence of OA. ATR inhibitor caused a dramatic increase in the mobility of CtIP where the other inhibitors caused only slight increases in mobility, suggesting that ATR was responsible for CtIP phosphorylation. A loss of pT818 signal was also observed with ATR inhibition. These observations were also confirmed with immunodepletion of ATR, indicating that ATR was responsible for phosphorylation of T818 of CtIP. Also immunofluorescent antibodies were used to determine that pT818 CtIP co-localizes at the site of DNA damage, and that this co-localization is diminished upon ATR inhibition.

The role of ATM in CtIP phosphorylation was also probed with ATM inhibitor on extract treated with DNA damage. ATM inhibition decreased CtIP recruitment to chromatin in LSS slightly but in HSS abolished CtIP recruitment to chromatin, and decreased resection significantly. Phosphorylation at T818 was undisturbed upon ATM inhibition, however. The authors hypothesized that ATM was required for initial DSB processing in the absence of Exo1. 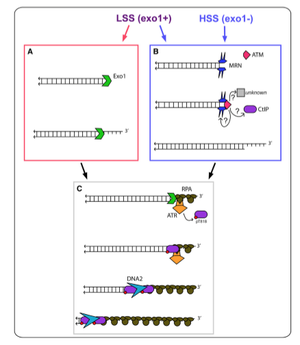 Model for Resection of Neat DSBs in LSS and HSS [1]

This paper showed compelling evidence of the importance of CtIP phosphorylation by ATR in Xenopus extracts. They were able to show that hyperphosphorylation of CtIP occurs after DSBs, and that ATR phosphorylation at T818 is critical for CtIP mediated resection. This finding is significant since it shows the importance of a signaling on the processing of DNA ends and efficient repair by HR. The following figure shows the final model proposed by the authors showing that resection can be initiated by Exo1 or by CtIP and MRN in an ATM dependent manner. This allows for RPA recruitment to ssDNA to activate ATR which is then able to phosphorylate CtIP at T818. This phosphorylation is essential for stable binding of CtIP to chromatin and extension of resection in a DNA2 dependent manner.