eRNAs Are Required for p53-Dependent Enhancer Activity and Gene Transcription

p53 is a tumor suppressor protein that is found to be mutated in over 50% of human cancers. The majority of these mutations are found to be within the DNA binding domain of p53, so its DNA binding is thought to be critical for its tumor suppressive properties. p53 can be activated by DNA damage, oxidative stress, osmotic pressure, hypoxia, oncogenic signaling, and many other cellular stress signals. Under tight regulatory control, p53 has a very short half-life in human cells, degraded mainly through the mdm2 ubiquitin E3 ligase. This transcription factor is able to regulate hundreds of downstream targets responsible for controlling apoptosis, cell cycle arrest, DNA repair, and senescence by binding to DNA in a sequence specific manner. These functions of p53 have endowed it with the nickname “the guardian of the genome”. p53 is found to be localized to promoter regions of its gene targets, but chromatin binding studies have shown that it binds to intergenic space as well. Interestingly, the tumor suppressive capabilities of p53 cannot solely be accounted for by the targets that it affects, suggesting that p53 may have an ability to regulate gene expression through non-coding RNAs. [1, 2]

Enhancers are regions of DNA that do not code for protein, but regulate genes through long distance interactions. These domains contain characteristic signatures of chromatin identifiers such as methylation and acetylation of histones that allow them to be identified. It is thought that through looping of DNA, proteins bound to enhancers are able to interact with the transcription complex at the gene promoter. Recently, however, a study by Kim et al showed that RNA polymerase II (RNAPII) is able to localize to enhancer regions and transcribe bidirectionally at these regions, producing relatively short transcripts <2kb that are nonpolyadenylated. These RNAs have been called enhancer or eRNAs and their function on gene regulation remains unknown. This study identified that p53 is able to bind to enhancer regions that transcribe eRNAs that are required for the enhancer domain’s effect on p53-mediated gene regulation. [1, 3]

The authors used p53 ChIP-seq data available in the literature to search for p53 binding sites that are consistent with those of enhancer regions. In particular, enhancer regions are characterized by high levels of histone 3 lysine 4 monomethylation (H3K4me1) and H3K27 acetylation. These regions also have low levels of H3L4me3. The identified regions were named p53 bound enhancer regions or p53BERs and binding of p53 was confirmed using ChIP to those sites.

Luciferase assays were performed in which vectors containing the putative p53BERS were cloned upstream of the luciferase gene and transfected into human cells. The transcriptional enhancement of luciferase reporter compared to a genomic control was shown to depend on functional p53 activity and was dependent on the orientation of the p53BER.

p53BERs Interact with Genes within the Same Chromosome and Affect Transcription

In order to investigate the effect of DNA looping on these enhancer regions, chromosome conformation capture was performed in order to identify genes in close physical proximity to the p53BERs. It was shown that each p53BER was able to interact with many genes within the same chromosome. Knockdown of p53 showed that many of these genes required p53 in order to be expressed properly. Interestingly, dual specificity phosphatase 4 (DUSP4), pregnancy-associated plasma protein A (PAPPA) and immediate early response 5 (IER5) were shown to have enhanced gene expression when p53 protein levels were stabilized via chemical inhibition of the MDM2 ubiquitin E3 ligase. Importantly, there was no significant binding peak of p53 to the promoters of these genes, suggesting that the stimulation of gene transcription occurs solely through long distance interactions.

Enhancer regions that code for eRNAs are shown to be bound by RNAPII and p300/CBP and were found by the authors to be bound to each p53BER. In order to determine whether these enhancer regions were producing eRNAs, quantitative PCR was performed with both endogenous p53 expression and enhancement of p53 stability via inhibition of MDM2. Transcripts were induced when p53 was present, but were not detected with knockdown p53 or mutant p53 expression. The authors showed that these transcripts were likely to be nonpolyadenylated, since an oligo(dT) primer failed to amplify the transcripts’ cDNAs.

In order to investigate whether or not eRNAs directly affect transcription of target genes, the following assay was performed. Three regions around the p53 binding site within the p53BER were cloned into a vector that had 24 copies of hairpin RNA structure, in order to create a chimera RNA construct. This hairpin RNA is the preferred binding substrate for the MS2 bacteriophage coat protein (MS2-CP). MS2-CP was expressed as a fusion protein with the Gal4 DNA-binding domain. A Gal4 binding site was cloned into a luciferase reporter. This assay served to tether eRNA regions to the luciferase reporter and show one of the three regions of the p53BER was able to enhance reporter output. Removal of the tether reduced output, suggesting that the eRNA must be in close physical proximity to exert its effect.

eRNAs are Required for Enhancement of Transcription of p53 Targets

siRNAs were generated to target the eRNA transcripts produced from p53BERs. It was shown that knockdowm of these eRNAs inhibited the p53-mediated transcriptional activation of PAPPA and IER5, suggesting a functional role for these eRNAs. Also, MCF7 cells transfected with these siRNAs were resulted in impaired G1 arrest after exposure to IR. G1 arrest is normally initiated by p53 after IR, suggesting that eRNAs are important for p53 mediated cell cycle checkpoint activation.

eRNAs have only recently been identified as a new form of non-coding RNA, and their function in human cells is unknown. This study establishes a role for this kind of RNA on long-distance gene regulation, although its mechanisms of function are not understood. This opens a new avenue of research, since eRNA inhibition is able to downregulate multiple genes at once. This is also critical to understanding the role of p53 on gene regulation in human cells and cancers. [1] 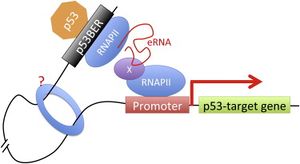