To examine the mobility of the MutSa/MutLa early mismatch repair recognition system on DNA, the authors used Total Internal Reflection Fluorescence Microscopy to examine single-molecule curtains of DNA aligned in flowcells. A small volume flowcell was constructed on the surface of a quartz slide, and then a lipid membrane was coated to the inside, allowing lambda DNA(containing a short region with three mismatches to flow until it reached nanofabricated chrome barriers. The chrome barriers prevented further flow of the DNA ends, allowing them to be stretched out and visualized. Quantum dot conjugated MutSa was then applied to the flowcell, and observed binding to the DNA. The authors noted that MutSa bound somewhat specifically to mismatches, so they designed further experiments. (Figure 1) Using a dig-tag on nanofabricated islands, the authors were able to double-tether the DNA and observe the mobility of MutSa in the absence of flow. They found that MutSa could find the mismatch by either 1D sliding (first binding to the DNA and then sliding to the mismatch), or by 3D diffusion (binding directly to the mismatch). (Figure 2) 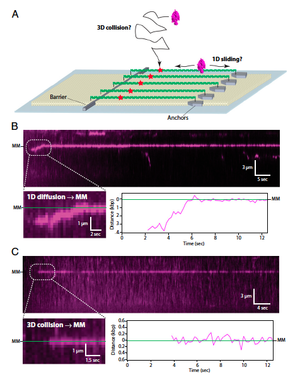 This paper, along with the author's previous works(x,y), not only describes the movement of the mismatch repair proteins along DNA, but also gives a model by which the cell can selectively find DNA damage.