Fanconi Anemia is a genetic disorder resulting from the mutation of one of at least 15 gene products involved in DNA repair. Eight of these proteins, FANC(A, B, C, E, F, G, L, M) bind to form the FA core complex, which can ubiquitylate FANCD2 and FANCI in response to Interstrand Crosslinks (ICLs). (2) Like most DNA Damage, these crosslinks can arise from a variety of endogenous and exogenous sources, but the most common insults come from anti-cancer agents such as cisplatin and intercalating agents such as psoralen. It has been estimated that a repair-proficient bacterium can withstand about 20 cross-links through base-excision repair, in which the cross-linked bases are removed and replaced. (3) However, mammalian cells must be able to withstand much more damage, and it was estimated in the same study that most could repair several hundreds of cross-links. FANCI-FANCD2 is important for the repair of these cross-links, specifically in S phase of the cell cycle, but the mechanism by which this complex acts is not clear. The resolution of the ICL proceeds with the stalling of two replication forks in the -20 to -40 base pairs from the damage, a leading strand approach to the -1 position, a cut of the lagging strand DNA from both sides, and extension of the crosslinked DNA strand, which can lead to homologous recombination to fix the cut DNA. (Figure 1A) Here, the authors showed that FANCD2 is ubiquitylated on Lysine 562 upon encountering an X-structure of crosslinked DNA and complexes with FANCI to promote DNA cuts surrounding the crosslink in order for repair to continue. 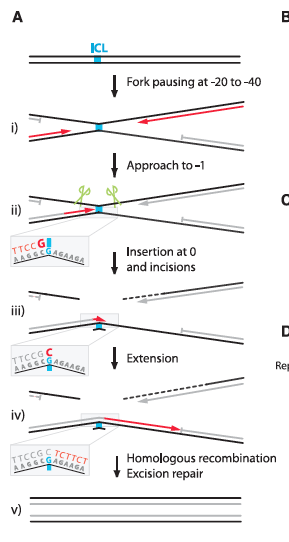 Figure 1A: Resolution of Interstrand Crosslinks by Translesion Synthesis

In order to study the effects of the FANC proteins without completely reconstituting replication machinery, the Knipscheer et al. used the frog species Xenopus lavis as a model system. The embryos from these amphibians can be spun either in a low speed supernatant (LSS) that allows for replication to occur, or in a high speed supernatant(HSS), which does not facilitate replication. To confirm a role of FANCD2 ubiquitylation in repair of ICLs during replication, extracts with or without geminin to inhibit replication were incubated with plasmid DNA that had been crosslinked with cisplatin in such a way that only repaired plasmids would be able to cut at a restriction site. They then probed the extract for FANCD2 and saw that in the replicating extract but not the non-replicating, FANCD2 was ubiquitylated and this correlated with ICL repair. Next, they checked the conservation of the ubiquitylated Lysine between Xenopus and humans and found sequence similarity. Thus, they decided to purify human FANCI and FANCD2 (ID) with either WT or K562R, which inhibits monoubiquitylation, in order to reconstitute immunodepletions to draw conclusions about function. They saw that the wild-type, but not the mutant was localized to chromatin in a replication-dependent response to ICLs. In a similar assay, WT but not mutant ID complex was able to restore the repair function of immunodepleted extracts. Although ubiquitylated ID was known to be important for ICL repair during replication fork convergence, the mechanism and critical step remained unknown. To resolve the critical step of ID-mediated repair, pICL was crosslinked with cisplatin, added to immunodepleted extract, replicated with radioactive dNTPs, and then digested with the restriction enzyme AflIII and run on a sequencing gel to resolve the step of repair samples are in after a certain time. They found that the mock depleted but not the FANCD2 depleted was able to accumulate extension products of the fork, meaning that the ID complex is important during or before extension of the cut ICL. Similarly, FANCD2 depleted extract that had been supplemented with recombinant WT ID Complex but not K562R was able to accumulate extension product. 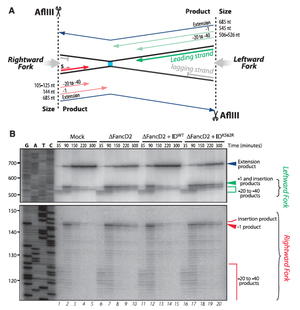 (Figure 3A, B). This led the authors to wonder at what step surrounding the X structure DNA requires FANCD2-FANCI. To test this, they made smaller restriction enzyme cuts on the pICL plasmid at different time points and ran these on a denaturing gel. (Figure 4A,B)

They found that FANCD2 depleted extract was able to form the X-structure DNA, but was not able to resolve it into linear products like the WT ID supplemented or mock depleted extracts. This means that the FANCD2-FANCI complex is important for the cutting of X-shaped DNA structures for resolution of interstrand cross links during translesion synthesis.

Knipscheer et al. show here a mechanism by which FANCI-FANCD2 promotes Translesion Synthesis over an Interstrand Crosslink caused by cisplatin. This novel paper outlines the critical step, resolution of the X-shaped structure of ICL repair, that requires the ubiquitylated FANCI-FANCD2 complex. It is interesting to note that neither FANC proteins in the ID complex have nuclease activity. Rather, they may recruit other factors to resolve the X-structure, but further studies will need to be done to confirm this.