Crosslinks in DNA occur when various exogenous (UV light or chemotherapy) or endogenous agents (product of lipid peroxidation) react with two different positions in the DNA. If this crosslinks occur in the same strand it is called intrastrand crosslink. Examples of that would be 1,2-d(GpG) dimers or cis-syn thymine dimmers. If the crosslink occur in the opposite strands of the DNA it is called interstrand crosslink. Crosslink could also occur between DNA and protein. High fidelity DNA polymerases can be divided into five different families. They all have a shape that can be compared with that of a right hand (“thumb,” “palm,” and “fingers” domains) (6). dNTP first binds to a primer-template complex with the polymerase in a non-template-dependent fashion- only with the correct Watson-Crick base pairing between template and dNTP does the fingers rotation essential for catalysis to occur- That is, fidelity for incorporation of the correct nucleotide at the polymerization step is enhanced by this catalytically essential, induced fit conformational change, which detects the presence of a correct base pair (6).

When encountering crosslinked DNA, high fidelity DNA polymerases pause, stalling cell proliferation and activating DNA damage response signals which lead to apoptosis if the damage is not repaired. This is what makes molecules that induce DNA crosslink a good anticancer drug. But what about DNA damage we get from sunlight: there is a subset of specialized DNA polymerases that synthesize DNA past template lesions that block replicative polymerases. One example of these DNA polymerases is DNA polymerase η (2). “DNA polymerase η (Pol η) is a eukaryotic lesion bypass polymerase that helps organisms to survive exposure to ultraviolet (UV) radiation, and tumor cells to gain resistance against cisplatin-based chemotherapy. It allows cells to replicate across cross-link lesions such as 1,2-d(GpG) cisplatin adducts (Pt-GG) and UV induced cis–syn thymine dimmers.” (1).

Cisplatin form platinum complex inside of a cell which binds to DNA and cross-links DNA as shown in figure 2(4). In this case the cross link occur between GpG nucleotides forming the 1,2-d(GpG) cisplatin adducts (Pt-GG)(4).

This cross-linked cause the two guanine to be perpendicular to each other like we see in figure 3(5). This change in conformation causes a partial shift from a B-like to a A-like duplex conformation resulting in a deepening of the major groove and a shallowing of the minor groove. It also lowers the stability of the host duplex (4).

In this paper Thomas Carell group used crystallography and primer extension assays to give structural and biochemical analysis in how polymerase η copies the pt-GG-containing DNA. They crystallized the yeast pol η as a ternary complex with incoming dNTP and two different 16bp templates containing the pt-GG, annealed to two different 9bp primers.

The first crystal with the CP1 DNA diffracted to only 3.1 Å, but was enough to see the electron density map for the pt-GG. This crystal gave them two different complexes in the asymmetric unit. The first complex contains the Pt-GG lesion partially situated in the active site, with the 3′dG of the lesion forming a standard Watson-Crick base pair with the incoming dCTP. The second complex shows the Pt-GG lesion outside the active site in front of the DNA binding site. So they suggested that this second complex probably presents the pre-elongation state. And that the first complex presents the 3’dG elongation state. The DNA different orientation between the pre-elongation and the 3dG elongation state is accompanied by small motions of the thumb and PAD domains, relative to the palm and finger domains. This group found that the 3’ OH group of the Guanine on the primer next to incoming dCTP is actually located ~8.5 Å away from the dCTP’s a-phosphate and hence is unable to perform primer elongation. Whereas, it is about ~5.0 Å in the 3’ dG elongation complex, that it is well positioned for nucleotide transfer and elongation which explains why the first step of lesion bypass is relatively efficient.

The second ternary complex with the CP2 DNA also showed two different complexes in the asymmetric unit. So again in this complex the 3’ dG in the dimer is already bound to dCTP and this primer-template is crystallized with the pol η and an incoming dATP (they choose to add dATP here and not dCTP because it was know that this enzyme is less efficient for 5’dG bypass and promiscuous for dCTp and dATP). In this second crystal they saw the the 5’dG stays perpendicular to the 3’dG and to the incoming dATP. Therefore only one hydrogen bond was possible between dATP and 5’dG which they hypotheses as being the minimum requirement for the template-primer complex to pull the incoming dNTP and base pair with the 5’dG. The primer 3’OH in this structure was ~7.5 Å away from dATP, much larger than the ~5.0 Å of the first elongation complex which might explain why this second bypass is slower.

To support their single Hydrogen bond theory, they performed primer extension using dZTP which as you can see in figure (5) cannot form hydrogen bond and as a result they saw that 5’dG bypass was indeed reduced. 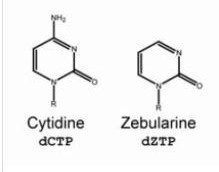