DNA glycosylases are proteins responsible for DNA damage recognition and repair [4]. These enzymes search entire genomes for single nucleobase lesions to initiate base excision repair. The ability of DNA glycosylase to seek and find damaged bases is a wonder of science, especially since there are only minor differences between impaired and unimpaired bases. Thermo energy fuels this efficient process, as no biochemical forms of energy are expended. Details concerning the function and execution of DNA glycosylase are still under investigation, but the article “The Structure of a DNA Glycosylase Searching for Lesions” intends to shed light on the subject [1].

In this study, the authors utilized a bacterial DNA glycosylase (Bacillus stearothermophilus MutM) that specifically associates with 8-oxoguanine (oxoG). OxoG is a form of DNA damage from reactive oxygen species, where guanine is oxidized. As a result, the lesion can cause mismatched base pairing or mutations leading to genome instability and cancer if the damage goes unrepaired [2]. There is an oxoG resistance pathway in bacteria to protect against such damage (the “GO” system). MutM is the component of the system responsible for excising oxoG:C base pairs [3].

When MutM binds to an oxoG DNA base it represents the lesion recognition complex (LRC), which was used to investigate the recognition and repair method Fig 1A. Images of the LRC indicated that MutM physically flips the oxidized nucleobase out from the DNA helix to position it into its active site Fig 1A. Extrahelical base excision is now believed to be a universal technique used for all DNA glycosylases [1]. 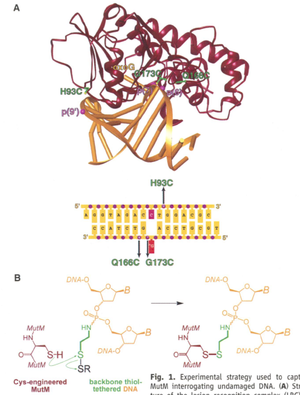 The mechanism of how extrahelical base excision is executed, however, is still undetermined. There are three proposals previously considered to explain how DNA glycosylases search, find, and repair damaged nucleobases- 1) It actively extrudes every base from the DNA; 2) It detects damaged bases that were spontaneously extruded from the DNA; or 3) It identifies lesions and activates the extrusion from the DNA. The researchers focused on the latter option, intrahelical lesion recognition, as it is the most kinetically favorable [1].

Mutant MutM proteins were synthesized from B. stearothermophilus MutM gene with point mutations and megaprimer mutagenesis. The DNA oligomers with and without lesions were synthesized using a DNA synthesizer. Phosphoramidate- cystamine backbone modifications were also made for DXL with the cysteine-engineered MutM.

Different length carbon linkers and phosphate positions on the DNA backbone were investigated for DXL of MutM. Two, three, and four carbon chain thiols were tethered to the phosphates to serve as the linker to attach the cys-engineered protein during incubation (2:1 protein to DNA concentration). Non-reducing SDS-PAGE confirmed the crosslinking quality fig S1, and the product was purified on a monoQ column and concentrated to 250 μM.

X-ray crystallography was used to determine the crystal structures of the protein-DNA complexes. X-rays were generated using a synchrotron.

Crosslinked, undamaged complexes were formed using the 1:1 hanging drop vapor diffusion method at 4°C (12-18% PEG 8K, 100mM sodium cacodylate pH 7.0 and 0-5% glycerol reservoir solution). These crystals were also cryoprotected with glycerol and frozen in liquid nitrogen for data collection. Crystal structures were solved with molecular replacement, which requires a model of the structure in advance to serve as the initial search model to conduct the translation and cross rotation search. The models were built as previously stated.

Intermolecular disulfide cross-linking (DXL) of the LRC was used to develop structures of MutM in the process of examining undamaged DNA (G:C base pair). The best positions and linkers for the DNA-MutM crosslinks were determined. The Q166C mutation with a two-carbon tether on phosphate 6 (Q166C/p6’) produced the fastest DXL at the purest and highest yield to form Interrogation complex 1 (IC1) fig S1. The IC1crystal structure was solved with 2.0 Å resolution.

IC1 was intended to interrogate a G:C base pair at the same position of the oxoG:C base pair in the LRC. When the LRC crosslink position on the DNA backbone was phosphate 6 (p6) it targeted base pair 8 (the oxoG:C bp) Fig 2A. However, the crystal structures of IC1 determined that with the crosslink position at p6, it targeted bp 9 (an A:T bp) Fig 2B. Here the DXL between the protein and DNA allowed MutM to shift itself further down the DNA than in the LRC.

Since the IC1 was interrogating the wrong bp, the proper crosslink position and register to target the intended G:C bp was investigated. Adjusting the crosslink still resulted in the complex targeting an A:T bp, which lead the researchers to believe there was an A:T preference. The bps were switched in IC1 to create G:C bp at the 8, 9 and 10 positions (IC3) to force MutM to target the intended bp Fig 2D.

Structures of the LRC revealed the damaged oxoG base inverted from the DNA helix and positioned in the extrahelical MutM active site. Three main protein residues then fill the gap created from this inversion. The Phe114 residue inserts itself into the helical stack and causes the DNA to bend, while the Arg112 and Met77 residues enter the vacant space and interact with the base pairs Fig 3A. These protein-DNA interactions are different in the interrogation complexes, because here the target base pairs are still intact and intrahelical. Although the Phe114 residue still inserts the helix and buckles the target base pair, Arg112 and Met77 no longer insert the helix and interrelate with the DNA. It was determined that DNA glycosylase MutM utilizes its Phe114 residue to serve as a probe to search for and detect lesions while they are still within the DNA helix.

MutM was used to learn more about how DNA glycosylases function. The course of recognition and repair were explored by capturing crystal structures of the enzyme during the interrogation process. The structures indicated that MutM utilizes a probe to pinpoint the oxoG lesions via intrahelical lesion recognition. Upon recognition, the repair process begins.