The parkin gene, PARK2, contains 12 exons and 1.5 Mb [2]. PARK2 is located on a region of chromosome 6 that is known to be fragile and unstable; making it prone to mutations and deletions [1]. Genetically acquiring a mutation in PARK2 can lead to developing early onset autosomal recessive Parkinson’s Disease (PD). The protein is an E3 ubiquitin ligase, which functions as a component of the ubiquitin proteasome degradation system. It consists of 465 amino acids, an ubiquitin-like domain, and two RING finger domains [1]. Ubiquitination (and polyubiquitination) marks proteins to be degraded by the proteasome. Mutations of parkin can result in the loss of this function and endanger the cell. Studies have shown that improper protein degradation can cause a build-up of parkin substrates and neuronal death of the cells producing dopamine.

Mitochondrion function and integrity is also upheld by the parkin protein, but the link between parkin, mitochondria, and PD is still being investigated [4]. Overall, parkin is suspected to play an important role in DNA damage, cancer, PD, and can possibly function as a tumor suppressor [1].

In this study, Kao investigated the role parkin plays in preventing DNA damage, repairing DNA damage, and reducing DNA damage-induced cell death. The interaction between parkin and the proliferating cell nuclear antigen (PCNA) was also probed. PCNA is a DNA clamp responsible for recruiting the proteins that respond for DNA excision repair [1]. This interaction occurs in the nucleus, as DNA damage induces the translocation of parkin from the mitochondria to the nucleus [6].

Rabbit anti-parkin, mouse anti-Myc, and mouse anti-PCNA antibodies were used for co-immunoprecipitation and immunoblotting. The anti-8-oxoguanine (8-OHdG) antibody was also used to detect oxidative damage in the cortex of aging mice.

The host cell reactivation assay (HCR) used a transfected enzymatic gene indicator to detect cellular repair of transcription events [2]. To induce DNA damage from UV-irradiation and oxidative-stress, a pTK-Renilla reporter plasmid was exposed to UV-C light (254 nm) at 250 J/M2 or 300 μM H2O2 - such damage reduced expression. pTK-Renilla expression vectors with and without exposure were then transfected into SH-SY5Y cells to study DNA repair. To monitor transfection efficiency there was also co-transfection of the firefly luciferase vector (pGL3-basic). The cells were lysed and analyzed by renilla and firefly luciferase assays.

To evaluate parkin’s prevention of genotoxicity and cell death, a clonogenic assay was used to detect survival rates after SY5Y cells (transfected with the empty pcDNA3 control vector, wild-type, and Del 3–4 mutant parkin expression vectors) were exposed to UV-C light (254 nm) at 80 J/M2 and cultured for 4 weeks. 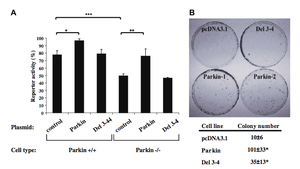 Since UV-irradiation of DNA is most commonly repaired by nucleotide excision repair (NER), parkin’s ability to repair UV damage was examined. The pTK-renilla luciferase reporter plasmid was damaged by UV-irradiation, transfected into wild-type and parkin deficient cells, and analyzed by the HCR assay. The researchers detected the luciferase reporters activated after UV-irradiation to quantify the occurrence of NER Fig 1A. Overall repair activity of the UV-irradiated reporter was more prevalent in wild-type cells. The ability to restore DNA repair from co-expressing the parkin plasmid in parkin deficient cells was a key factor, especially since the control and mutated parkin plasmids lacked this affect. Since repair activity was higher in the control of the wild-type cells (under the same conditions), it was also inferred that parkin plays an active role in initiating NER [1]. 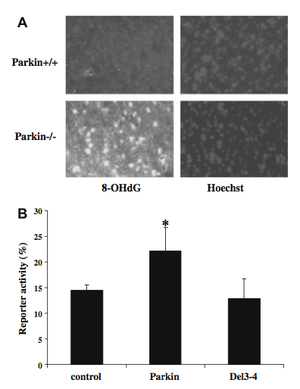 While investigating genotoxicity, the presence of parkin was shown to protect against DNA damage-induced cell death. Cells overexpressing the wild-type and mutant vectors were exposed to a lethal amount of UV-irradiation; thus detection and repair of the UV damage was necessary for survival. The cells with wild-type parkin had a significantly higher colony count (101±33) than the mutant and control cells Fig 1B. 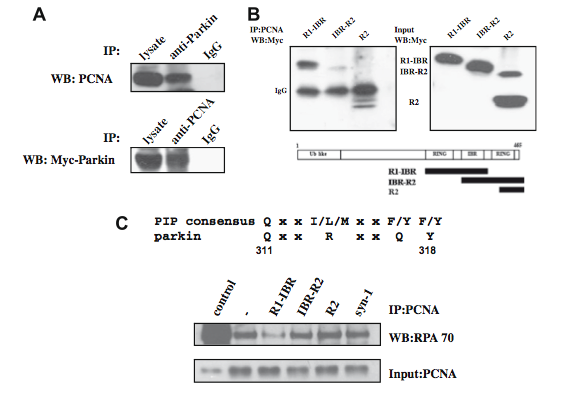 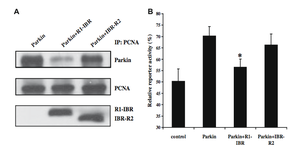 Interaction of parkin with PCNA

Immunodection experiments were performed to determine if parkin associates with proteins recruited for NER. PCNA is a protein needed for NER that is activated by ubiquitination. Immunoblotting, co-immunoprecipitation, and reverse co-immunoprecipatation identified a definite interaction between the two proteins Fig 3A. More specifically, PCNA was demonstrated to interact with the first ring finger region of parkin (R1-IBR) through its PIP binding domain Fig 3B-C. When the parkin/PCNA interaction was inhibited by the R1-IBR/PCNA interaction there was a reduction in repair activity Fig 4B [1].

Although the parkin-PCNA interaction influences DNA repair, the mechanism is still unknown. Kao suggests parkin may activate PCNA's repair function, or serve as a dock for other proteins required to initiate DNA repair. The data demonstrated functional parkin is involved in protection against DNA damage and stimulation of repair. Several mutations of parkin have been linked to generating AR-JP and breast, lung, ovarian and hepatocellular cancers, which is why a functional parkin protein is valuable to genotoxicity [1].