The TP53 gene encodes for the tumor suppressor protein, protein 53 (p53). p53 is a transcription factor and can turn on genes to carry out particular functions. It serves as a regulator of the cell cycle to maintain genome integrity [1]. Assaults to the DNA can lead to DNA stress that result in the accumulation and activation of p53 in the nucleus. The p53 response varies with the nature of the cell and stress. The protein can initiate cell cycle arrest, apoptosis, or DNA repair in attempt to help the cell recover [2]. Cells without functional p53 do not respond properly to damage, and this makes them vulnerable to tumorigenesis. In p53-null mouse embryonic fibroblast it was observed that the cells developed abnormal chromosomal characteristics due to faulty segregation. Similar trends were also seen in other types of p53-null cells indicating the importance of the protein in maintaining genome integrity. p53 is believed to play a role in multiple repair pathways by either direct or indirect involvement [1].

Several mutations can build up; and because of this, in 1994 it was reported that mutations in the p53 gene were present in over 50% of human cancers. These mutations were widespread and found in 50 different types of cells and tissues, with most of them occurring in the DNA-binding domain of p53 [3]. Although mutations are often associated with negative outcomes, some p53 mutations have lead to DNA damage resistance. With this, it is apparent that p53 impacts the response to DNA damage in contradicting and complex manners [1].

Ionizing radiation (IR) requires Ataxia telangiectasia mutated (ATM), a protein kinase involved in double-strand breaks (DSB), to induce p53. DSBs are repaired in slow (up to 24 hours) and fast (2- 6 hours) phases. Approximately 80% of breaks are repaired during the fast phase. ATM signaling functions in the slow phase to repair DSBs located in constitutive heterochromatin (HC). These regions of the genome are highly compact and repetitive, and form centromeres or telomeres [4]. Damage from IR occurs at the same rate in HC and euchromatin, but there is a reduced amount and clearing rate of γH2AX foci at the site in HC. The histone variant H2AX is phosphorylated in the event of DNA damage, thus γH2AX foci formation indicate that DSBs are present [5]. Since HC is wound so tightly, access to the DNA is limited and DSB repair is delayed. The chromatin must be remodeled to grant the repair factors a path to the DNA, thus ATM phosphorylates KAP1 (a transcription activator) to initiate relaxation of HC [1].

After DNA is replicated biochemical marks need to be made and recognized for HC packaging. Hypoacetylation and methylation are used to characterize HC and initiate the transition between euchromatin and HC [4]. Histone H3 methylated at lysine 9 trimethylation (H3K9me3) represses transcription and silences genes after DNA damage. In mouse cells, the histone methyltransferase SUV39H1/2 regulates H3K9me3 and telomere modification to protect HC and DSB repair. However, the Jumonji domain 2 family demethylase (JMJD2b) reverses methylation done by H3K9me3 and negates the effectiveness of SUV39H1. Therefore, overexpression of JMJD2b has been linked to cancer development and chromosome instability. This research investigates how p53 affects the events of DNA damage repair via regulation of JMJD2b and SUV39H1 levels [1]. 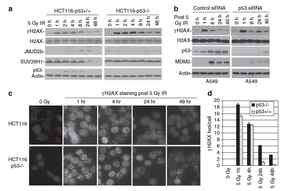 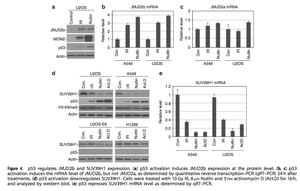 The researchers determined that after exposing HTC116 cells to IR, the absence of p53 delayed HC DNA repair. DSBs were detected using γH2AX foci as a marker. In wild type cells, γH2AX expression was depleted after 24 hours; however, γH2AX expression was still present in the p53 knockout cells at 48 hours (Figure 1c). The p53 knockout cells also failed to induce JMJD2b expression and suppress SUV39H1 expression after damage, which increases the repair time (Figure 1a). Since repair took approximately 24 hours in the wild type cells, the γH2AX foci were thought to be in HC regions. ChIP was utilized to confirm the foci, and therefore the DSBs being repaired, were in the HC (Figure 2).

The downregulation of HC H3K9 methylation after IR was also examined via ChIP. In HTC116 p53 wild type cells there was a 70% decrease in the K9me3 level after 24 hours; this trend was not noticed in the HTC116 p53 knockout cells (Figure 3a). H3K9me3 is downregulated through JMJD2b and SUV39H1 regulation. Members of the JMJD2 H3K9 demethylase family were screened for possible involvement in this pathway, and it was revealed that p53 induces JMJD2b at protein and mRNA levels after cellular stress (Figures 1a, 4a, 4b). p53 activation was also shown to influence reduced expression of SUV39H1 (Figure 4d). Reverse transcriptase PCR (RT-PCR) showed there was a reduction in mRNA production, which suggested the reduced SUV39H1 expression was due to a lack of transcription (Figure 4e). JMJD2b’s function as a direct transcriptional target of p53 was investigated since p53 upregulated its expression at the mRNA level. The JMJD2b promoter has a p53-binding site near the transcription start site that is activated by p53. p53 also activated p21 for indirect downregulation of SUV39H1 (Figure 4d). 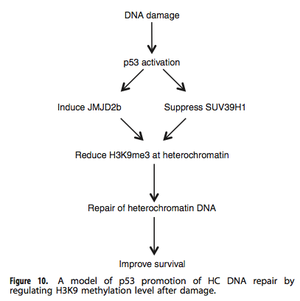 In the event of a DSB caused from IR damage, chromatin relaxation is initiated for DNA repair. The data presented in this article indicates that p53 plays an important role in this process. The presence of p53 influenced the downregulation of H3K9me3 in HC after IR; and the absence of p53 increased the slow phase repair time. It was then determined that these events occurred through the pathways of the p53 protein stimulating the expression of JMJD2b, and suppressing SUV39H1 in an attempt to aid HC relaxation for repair. Changes in expression of these chromatin modifiers acts as an antagonist for p53 activity. The repair of HC is the rate-limiting step in global repair of complex genomes, thus maintaining proper function of its players is crucial. p53 regulation of JMJD2b and SUV39H1 enhances HC repair efficiency while also controlling gene expression.