A riboswitch is a region of a mRNA that can act like a switch to turn gene expression on or off. In the presence of a specific ligand, a riboswitch changes shape uncoupling the polymerase of the DNA. Polymerase is no longer able to transcribe thus terminating gene expression. Riboswitches are useful for gene regulation.

Within a basic riboswitch, there are two main regions. One region, known as an aptamer, binds to a ligand. The second region is also known as a terminator hairpin.The mRNA is single stranded and has the ability to fold and base pair with itself. When this occurs the self-paired mRNA strand will form a linear track of sequence with a rounded top known as a hairpin formation. This hairpin structure is one of the most basic parts within a riboswitch domain. The other main part of a riboswitch is the aptamer. An aptamer is a region of mRNA that is self-pairing and forms a structure in which an allosteric site occurs. The existence of the hairpin is dependent on whether or not a ligand is bound to the aptamer. When a substrate, ligand, is bound to the allosteric site of the aptamer, the aptamer structure will undergo a shape change. When a ligand is bound to an aptamer it causes the aptamer to become more stable. Because a more stable aptamer region forms, the mRNA downstream from the aptamer undergoes a shape change and a terminating hairpin forms via mRNA base pairing with itself. In the event that a ligand has bound to an aptamer and a hairpin has formed, transcription is terminated by the uncoupling of the DNA polymerase. mRNA is transcribed until the polymerase reaches a polyuracil region down stream of the riboswitch. The polyuracil region is also known as a pause site because the polymerase tends to slow down as it passes through. The polymerase is knocked of the DNA by the hairpin as it reaches the polyuracil region and uncouples thus terminating transcription. If a ligand is not bound to the aptamer region, the polymerase will simply continue transcribing down the DNA strand and through the pause site. [2][3]

Riboswitches were first discovered around 2002. Metabolic pathways and such were noticed to change in the presence of certain chemistry such as vitamin B but it was not understood why this occurred and how it changed gene expression. It was discovered that vitamin B acts as a ligand and binds to the aptamer on the cobalamin riboswitch. With this discovery more naturally occurring riboswitches were discovered. The discovery of riboswitches allowed for a better understanding of how the RNA is able to regulate its own gene expression.

Variations of Riboswitches and Environmental Influences 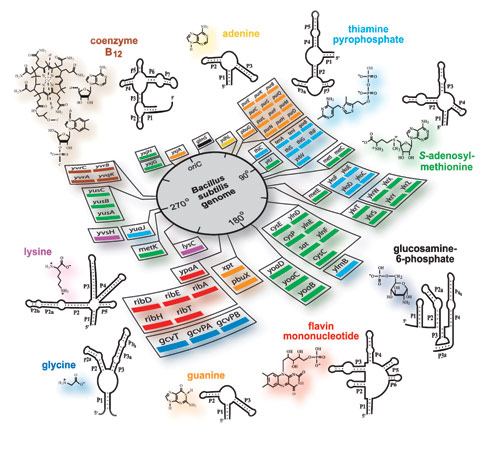 Some riboswitches are not dependent on a ligand but rather temperature. An example is a magnesium transport protein riboswitch found in Salmonella enterica. When a certain temperature is reached, the cell experiences heat shock and transcription of the mgtA gene is turned on. Increased transport of magnesium is thought to have thermoprotective functions by diffusion of energy and oxygen thus protecting the cells membrane and proteins from denaturing. [4]

Like other molecules, riboswitches are sensitive to pH levels, salt concentration, and temperature.

E. coli can be used to detect DNT by fluorescence. A fluorescence resonance energy transfer (FRET) riboswitch was created by placing eGFP (enhanced green fluorescent protein) and a REACh (Resonance Energy Accepting Chromoprotein) in combination along the mRNA strand with a TEV protease linking two proteins. In the presence of DNT the riboswitch is activated and the TEV protease is translated. The protease cleaves the link between eFGP and REACh thus allowing eGFP to become fluorescent. In this way, DNT can be detected by the fluorescence of E. coli. [5][6]

iGEM team ZJU from China used a theophylline riboswitch to test the efficiency of different tunable scaffolds that contained allosteric sites. The team named these alloscaffolds “clovers”. The more efficient the clover, the more fluorescent the E. coli in the presence of the ligand theophylline. [7]

The iGEM team at Imperial College at London discovered that an increase in theophylline transport rate and receptors increases the expression of the CheZ gene. CheZ has an affect on the way E. coli swims thus by adjusting the theophylline levels the team was able to indirectly manipulate E. coli’s swimming behavior. [7] 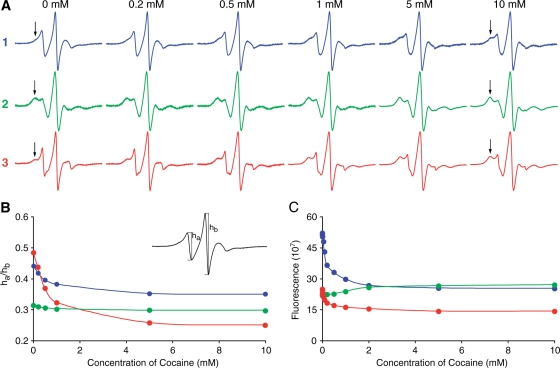 (A) EPR spectra of the spin-labeled aptamers 1 (blue), 2 (green) and 3 (red) at various concentrations of cocaine in an aqueous solution at 20 degrees celcius. The slow-motion component of the EPR spectra is indicated by an arrow. (B) A plot of the ha/hb ratio of the aptamer EPR spectra (see insert) vs. concentration of cocaine. ha is the height of the low-field peak and hb is the height of the centre peak of the EPR spectrum. (C) Relative fluorescence of reduced aptamers 1–3, plotted as a function of cocaine concentration in an aqueous solution at 20 degrees celsius. [8]

University of California Santa Barbara is working on a cocaine sensor that works like a breathalyzer. The detector consists of an electrode coated with riboswitch molecules whose aptamers have allosteric sites fit for cocaine. If present, cocaine acts as the substrate that binds to the aptamer. Once bound to the aptamer region of the riboswitch, the riboswitch will undergo a shape change. The new formation of the riboswitch allows electricity to pass freely through the riboswitch and the electrode. A detector is able to show the amount of electricity passed through the riboswitches. When the electricity reading is high, cocaine is assumed to be present. The electrode can be washed and reused up to 100 times however with each successive test, the accuracy of the test drops by 1%. Scott Test works in a similar way. The benefit of detecting cocaine in this way instead of olfactory senses is that riboswitch detectors are able to sense cocaine even through masking chemicals such as cobaltous thiocyanate which is commonly used by drug dealers too fool cocaine detectors. [9][8]

Stojanovic and coworkers created a synthetic aptamer that detects cocaine in 2009. In the presence of cocaine, the aptamer changes shape and turns transcription of fluorescent protein on. The aptamer is very specific to cocaine and does not bind to derivatives of cocaine thus giving very truthful results. [10]