Prokaryotic genes associated with a specific function are often grouped together in contiguous regions of the genome known as gene clusters [1]. Many of the functions encoded in these clusters are of potential interest to synthetic biology. Unfortunately, gene clusters are frequently subject to complex and highly redundant host regulation [1]. Furthermore, there may be no laboratory conditions known that allow for expression of these clusters. However, through a process known as “refactoring,” gene clusters can be recoded to systematically eliminate native regulation [2]. This process of refactoring aims to reduce the overall complexity of genetic systems and allows them to be tailored for a particular purpose. The term “refactoring” is borrowed from computer science and refers to the alteration of a program’s underlying code without changing its functionality [2]. This term was first applied in biology to describe the top-down approach of simplifying the phage T7 genome [3], but it is used here to refer to the bottom-up approach of eliminating native regulation of gene clusters and "replac[ing] it with synthetic genetic parts and circuits" [2]. The result of this process is is a simplified genetic system whose DNA sequence has been altered but encodes for the same function [2]. Operon refactoring is essentially a more systematic approach to metabolic engineering that aims to generate a simplified operon free of any internal and often cryptic regulation.

The design of refactored gene clusters (as suggested by Temme et al.) begins in silico, and the resulting sequence is constructed using DNA synthesis methods [2]. The first step of the design process is to remove regions of noncoding DNA and any known regulatory genes. Essential genes are then recoded by selecting codons that vary drastically from the wild-type (WT) sequence. The goal of this procedure is to introduce mutations in essential genes to eliminate any unidentified internal regulatory elements i.e. promoters, operators, mRNA secondary structure, etc. [2]. Bioinformatics approaches are then used to identify and excise putative functional sequences. These recoded genes are then organized into artificial operons (grouped based on required expression level) with spacer sequences physically separating each gene. Expression levels of each operon are controlled by synthetic ribosome binding sites (RBSs). The resulting gene cluster is a set of discrete genetic parts free of native regulation [2]. 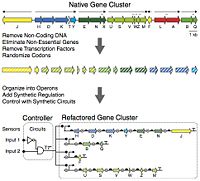 Once the native regulation has been eliminated, synthetic regulation can be added back to control the expression of a refactored gene cluster. This type of regulation requires the design of genetic sensors and circuits. In a recent proof of principle study conducted by the Christopher Voigt lab at MIT, researchers placed a refactored gene cluster under the control of a T7 promoter. The expression of an engineered T7 RNA polymerase (T7 RNAP) was placed on a separate plasmid containing the genetic sensors/circuits referred to as the controller. This genetic separation allows for expression to remain tightly off in the absence of a controller, and also allows one controller to be readily swapped for another containing different sensors/circuits [2].

In the aforementioned proof of principle study from the Voigt lab, refactored the nitrogen fixation pathway from Klebsiella oxytoca in order “to reorganize the cluster, simplify its regulation, and assign a concrete function to each genetic part [2].”

Tolerance of native gene cluster to changes in expression

Prior to refactoring the nitrogen fixation gene cluster, a robustness assay was “performed to determine the tolerances of a gene or set of genes to changes in expression level [2]." This information guided the grouping of genes into operons such that desired expression levels were achieved. For the tolerance assay, each gene in the cluster was knocked out and complemented under inducible control. Tolerance was determined by “measuring nitrogenase activity as a function of the activity inducible promoter [2]."

Complete refactoring of the gene cluster

The nitrogenase activities of the refactored operons were measured as a function of the isopropyl-β-D-thiogalactopyranoside (IPTG)-inducible Ptac promoter, and all had varying optima. In order to combine each operon, the Ptac promoters were replaced with T7 promoters with strengths on the same order of magnitude as the predetermined optima. Each half of the fully refactored cluster was assembled using Gibson assembly [4]. The activity of each half was first verified before the full cluster was assembled. The activity of the full synthetic cluster was measured in a strain of K. oxytoca deleted for the WT nitrogen fixation gene cluster. The synthetic cluster exhibits 7.4% ± 2.4% of the WT nitrogenase activity, and strains harboring the synthetic cluster grow 3.5-fold slower than WT strains. This reduced activity is an expected outcome of simplifying a highly evolved genetic system. Nevertheless, the complete refactored cluster contains ~100 genetic parts, each with a defined function [2]. 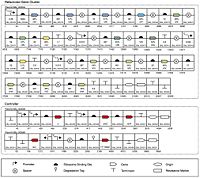 The genetic separation of the controller and the refactored gene cluster allowed the Voigt lab to easily change the regulation of the system by swapping out different controllers. To demonstrate this, they constructed two additional controllers. Controller 2 placed the expression of the T7 RNAP under the control of a Ptet promoter. This simply changes the identity of the inducer molecule (aTc), and as expected the activity was identical to that of controller 1. Controller 3 was designed as an ANDN gate and contains two inducible systems (IPTG and aTc), and in the presence of IPTG and the absence of aTc, nitrogenas activity was again identical to that of controller 1 [2].

The 2012 iGEM team at the University of Texas at Austin refactored the alkylxanthine degradation (Alx) gene cluster from Pseudomonas putida CBB5 to function as a caffeine-degrading operon in E. coli. E. coli strains harboring this operon were able to degrade caffeine to the guanine precursor, xanthine. Cells lacking a de novo guanine biosynthetic pathway and complemented with the refactored operon required caffeine for growth. Thus, these cells were shown to be “addicted” to caffeine [6].

E. coli cells deficient in de novo guanine biosynthesis are shown to be "addicted" to caffeine [6].