A probiotic (from the Latin, pro-, "in favor, for" and the Greek , biōtikós, "pertaining to life" refers to a live microorganism that provides a benefit to the host, either directly or indirectly, via interactions with the hosts cells or the host's microbiota. Although research for most of the last century focused on establishing the fundamentals of what a probiotic is, current research is aiming at characterizing the complex microbial communities found in on the human body and analyzing their roles in our health and disease [1]. An in depth exploration of probiotics as a way to treat disease will have its benefits, as its been shown by by methods such fecal transplantation in which a patient is treated for antibiotic-associated diarrhea[2]. Still, nowadays it is foods and probiotics that seem to dominate the general public's consciousness of what a probiotic is, as it still not seen as a way to prevent or treat disease in the same way a drug would. 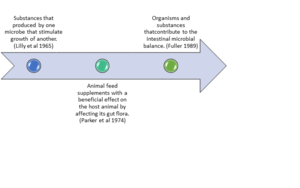 Definition of a Probiotic Trough Time

Probiotic foods defined by the Food and Agriculture Organization of the United Nations and the World Health Organization in 2001 a food product that contains viable probiotic microorganisms in sufficient populations (at least 10^6 cfu/g) incorporated in a suitable matrix, for example a yogurt. Not only this but it must be able to maintain the viability and its metabolic activity through processing, consumption and survive the gastrointestinal tract. Several health benefits have been attributed to the ingestion of such foods, including treating alleviating lactose intolerance.[3][4]

The Media's Take on Probiotics

Provided below are two recent articles, one from NPR and the other from The Telegraph:

Advancements Towards Probiotic GMOs in Food

A Food Grade and Generally Recognized as Safe Organism (GRAS) is a classification applied by the US Food and Drug Administration due to its long time use in food products. Most of the Lactococcus lactis strains that are recognized as GRAS microbes, contain multiple plasmids that provide important traits for the food industry. These traits include sugar utilization, bacteriocin, and bacteriophage resistance. Nowadays transfer of between these L. lactis plasmids and their traits occur via the method of bacterial conjugation. Still, a second less common way to modify L. lactis is via molecular cloning. It is this way that food grade vectors have been developed. A methodology used includes isolating endogenous plasmids from L. lactis and separately isolating useful markers from L. lactis strains that they could then put together into food grade expression vectors [5]. 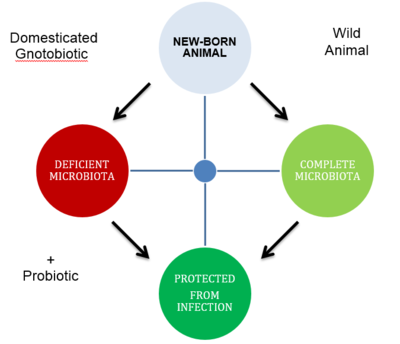 Protecting a Gnotobiotic Animal from Disease by Reestablishing the Microbiota With The Use of a Probiotic. Modified from Fuller's 1989 article: Probiotics in man and animals.

A human's microbiota, is a complex system of microbe-microbe interactions and host-microbe interactions that allows an state of homeostasis, and when perturbed an state of dysbiosis ensues. Probiotics can alter a host's microbiome to move from the state of dysbiosis to homeostasis. Based on this we can suggest an ideal probiotic would try to achieve reestablishing the benefits in the context of a diet that includes a probiotic either as a supplement or a treatment to a disease. Nowadays this approach can take the form of a rudimentary fecal transplantation from diseased individuals to healthy ones. Their approach to treat antibiotic-associated diarrea caused by Clostridium difficile infection was to assessing patient to one of three treatments: 1) included a 4 day vancomycin treatment followed by a lavage and the infusion of donor fecal matter, 2)a vancomycin only treatment, or 3)a vancomycin treatment followed by a bowel lavage.From these the most successful was the fecal matter transplant from a healthy donor, and as the authors concluded happened to statistically correlate to an increase and change in the microbial diversity of the patient.

Another approach has been to genetically modify Streptococcus mutants by deleting lactate dehydrogenase gene and making it deficient in lactic acid production, as lactic acid can damage a person's enamel. In turn this same strain became an effector used to produce mutacin which provided a selective advantage to this strain of S. mutans versus the native strain. This S. mutans was then tested in gnotobiotic rats and observed not to have an effect on the indigenous flora except for other indigenous S. mutants strains that are associated with dental caries. [6]

Future applications of probiotics could involve using them as delivery systems to fight certain tumors, as explored with the use of Escherichia coli Nissile 1917. In an in vivo study performed in mice testing for tumor specific accumulation of this E. coli strain it was found to be a good shuttle system based on it's ability to successfully colonize tumors (measured as 1x10^8 cfu/g of tumor, in comparison with spleen tissue). More over it was also successful in showing growth conditions and arabinose induced gene activation. [7] Finally, E.coli Nissile 1917 is one a generally recognized as safe (GRAS) organism known as Mutaflor.

Oversight of Probiotics in the United States

Probiotics are currently regulated by the Food and Drug Administration (FDA) in one of the following ways; As a dietary supplement, in which case only a premarket notice to the FDA is necessary or as a drug in which case a premarketing safety, efficacy and approval by the FDA are required. Currently, most of the probiotics on the market fall under the umbrella of a dietary supplement, but situations where the number of infections and the severity of such cases are causing clinicians to evaluate their use as drug, as it's happening for Clostridium difficile infections. In such cases, Florastor (Saccharomyces boulardii) a probiotic currently marketed as a drug is beneficial as it demonstrated its efficacy in reducing the recurrence of C. difficile when used in combination with standard treatment methods. Although cases in which Florastor has lead to fungemia, yeast present in the blood, have been reported these were not directly related with the use of Florastor, but because of the introduction of live yeast to a catheter site from contaminated hands of a technician that had hours earlier administered Florastor to treat another patient. [8] 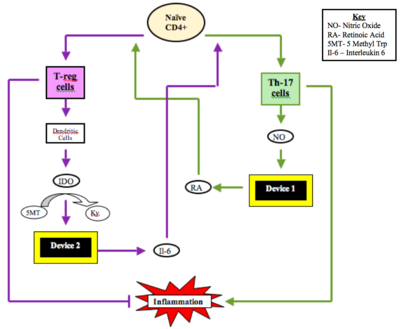 Model of The 2009 Stanford iGEM Team

The 2009 Stanford iGEM Team project centered on probiotics and Inflammatory Bowel Disease (IBD). IBD, as explained, is caused by an imbalance of two types of T-cells, Treg cells that regulate Th17 cells that cause the inflammation seen in patients. They suggest that an novel theraputic mechanism can be achieved by in vivo regulation of these cells. Their approach focuses in constructing two different E.coli strains, each that would contain a distinct input/output cassette. The first device would detect as input Nitric Oxide(NO), a byproduct of inflammation and Th17 proliferation, produces retinoic acid, that blocks further CD4+ T-cells differentiation into Th17 cells. The second device detects 5-Methyl tryptophan (5MT) as an input and produces Interleukin-6 to regulate Treg proliferation to regulate their immunosuppression response. Ideally depending on the balance between these two markers, if too much NO is sensed by Device 1 it would prevent inflammation. The opposite would also be true if the second device sences to much 5MT that would immunosuppress Th17 cell by blocking their differentiation.