The discovery of a bacterial-killing substance that could pass through extremely small filters was observed independently several times[1]:

The first therapeutic usage of phage was in 1919, to treat a child with severe dysentery. In a classic case of old-school science, the lead researchers (which included d'Herelle) drank portions of the bacteriophage preparation the day before treating the child, to check the treatment's safety in humans. The researchers didn't keel over, the child fully recovered within a few days, and further tests on other patients confirmed the result.

In the 1930s and 1940s, bacteriophage preparations were developed and sold by major companies such as L'Oréal and the Eli Lilly Company. The development and mass production of antibiotics in the late 1940s halted research into phage therapy in the West, due to the efficacy of antibiotics. Research continued in the Soviet Union. Hundreds of studies were made on phage therapy, with the the largest carried out in Tbilisi in 1963-64, involving 30,000 children [1]. This study focused on the use of phage as a weekly-administered prophylactic against Shigella. The incidence of dysentery was 3.8-fold higher in the placebo group, and there was a 2.3-fold decrease in diarrheal diseases of unknown origin in the treated group. These results are impressive, but many other studies lacked controls, weren't blinded, or omitted crucial data such as the number of subjects treated in a study. Combined with the lack of knowledge transfer during the Cold War, and the publication of these studies only in Russian, prevented advances in the Soviet Union from influencing research in the rest of the world. A review of the history of phage therapy can be found here, and includes a short review of the most significant Soviet experiments.[1].

Using engineered phage to more efficiently attack a biofilm. The phage carries the gene for DspB, an enzyme that degrades the extracellular polysaccharride component β-1,6-N-acetyl-D-glucosamine. DspB is produced during infection, and released after the cell is lysed, along with new phage.

Regular use of phage therapy occurs primarily in the Republic of Georgia, due to the presence of the Eliava Institute, which has researched phage therapy since the 1920s. However, synthetic biology has enabled entirely new approaches to phage therapy, such as engineering new abilities into the phage. One such ability is the degradation of the extracellular polysaccharides (EPS) produced by bacteria during infections[3]. Production of the EPS results in a biofilm, which protects the bacteria within from external harm, such as antibiotics and bacteriophages, limiting the damage to the cells on the surface. To break through this barrier, researchers modified T7 with the gene for dispersin B, an enzyme that degrades one of the key components of EPS. After bacteria on the surface of the biofilm are infected, they produce DspB along with new phage. After the cells lyse, the DspB can degrade the EPS, which exposes more bacteria to infection.

One concern of phage therapy is the rapid lysing of pathogenic cells which may contain endotoxins. Sudden, massive releases of toxin can cause dangerous amounts of inflammation. Therefore, phage that kill the targeted pathogen without disrupted the cell's integrity are of interest. This can be accomplished by that by modifying phage to express endonucleases and holins, which are toxic to the cell (chopping DNA and making non-catastrophic disruptions to the cellular membrane)[4]. Toxin release was minimized, which decreased inflammation and increased the survival rate of treated mice. 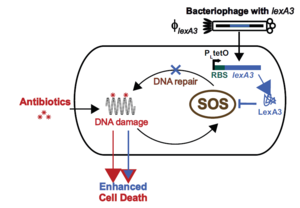 Enhancing antibiotic killing via modified phage. The M13 phage carries a copy of lexA3, which controls the activation of the SOS DNA damage repair response. Production of LexA3 prevents the cell from responding to the action of the antibiotic ofloxacin.

Phage therapy can be combined with conventional antibiotic treatment as a lethality enhancer. This is especially useful when trying to avoid quickly evolving resistance to the phage being used. In this approach, the antibiotics provide the killing blow, while the phage assist by suppressing gene networks that are not directly impacted by the antibiotics. One example of this was the combination of ofloxacin (which damages DNA by inhibiting the ligation action of DNA gyrase, while preserving the DNA cutting ability) with phage suppressing the SOS response, which repairs damaged DNA[5]. M13 phage (a non-lytic, filamentous phage) were engineered to overproduce LexA when infecting E. coli, which prevents the SOS response from occurring. When combined with ofloxacin, lexA phage increased killing by 2.7 orders of magnitude compared with using the non-LexA phage, and increased killing by 4.5 orders of magnitude compared to using ofloxacin alone.

The modified M13 phage was designed to be used in conjunction with quinolones, since they result in DNA damage. However, the lexA phage was also found to enhance other antibiotics, such as gentamicin (a aminoglycoside, which inhibit protein synthesis) and ampicillin (a beta-lactam, which interferes with cell-wall formation). The lexA phage could also restore the action of antibiotics against mutated, resistant bacteria, and against persisters (survivors from a previous round of antibiotic treatment).

The same study also targeted other non-essential genes to influence other systems within the cell (oxidative stress response and carbon storage regulation) to demonstrate the flexibility of this system. Similar to the earlier approach, genes controlling these pathways were over-expressed, preventing the cells from appropriately responding to the damage done to them.

Two teams in 2008 had similar approaches to modifying phage therapy: using a host that would be used as a probiotic to carry a phage targeting a gut pathogen. The goal of Team Hiedelberg's "EcoLicense to Kill" was to make a lambda phage that can transfer to a pathogen by conjugation. Once inside the pathogen, the phage would immediately begin replication (due to knocking out the lysogenic cycle of lambda). The pathogen is killed, and phage are released to infect more target bacteria, while leaving the original host (the "killer") unaffected. Team Caltech used a lamB- strain (LamB is a surface protein required for infection of E. coli by lambda phage) of E. coli that had lambda integrated into it's genome. This was a model for the future application, which could be an E. coli carrying a phage like P22, which could target Salmonella. Both teams succeeded at making proof-of-concept constructs.

Phage therapy can be used to rapidly (as compared to small-molecule research) develop anti-bacterial treatments, to both supplement and complement antibiotic usage. As the featured paper shows, synthetic biology can add novel features to phage, going far beyond what could be discovered in nature. In the future, there may be customized phage preparations for pathogens, and the adaptability and flexibility of phages ensures that new treatments can be developed as the pathogens evolve. In this way, phage are the ultimate weapon in the arms race between medicine and bacterial infections.

Phages also present an opportunity for preventive medicine, either in the form of modified phage preparations (which could be continually tweaked and updated, depending on current infection trends), or through the use of probiotics as described in the iGEM section. Future doctor visits could include a checkup on our microbiome, where the current members of the community are isolated, modified with friendly phage, and reintroduced to help ward off infections.