The concept of a “genetic circuit” has a long and storied past. When summarizing conclusions made during the 1961 Cold Spring Harbor Symposium, Francois Jacob and Jacques Monod – of Lac operon fame – established the electronic circuit paradigm for gene regulation. Jacob and Monod stated that different regulatory elements (i.e repressors, activators, etc.) could be assembled into a diversity of ‘circuits’ [1]. Here, we see a surprisingly accurate prediction for the developments that form a one of the major thrusts in synthetic biology.

Later, increased computing power was a considerable driving force for modeling gene regulation. Still, a paucity of understood pathways and regulatory elements prevented major gains. This situation changed with the onset of the ‘genomic era’, which was defined by developments like Sanger sequencing and PCR. Armed with new biological ‘parts’, researchers began constructing genetic circuits that experimentally validated mathematical modeling as well as the belief that engineering principles could be applied to biological systems. In the year 2000, a trinity of Nature papers detailed synthetic genetic circuitry that validated previous mathematical models of gene regulatory theory[2][3][4].

The definition of a genetic circuit is one rather important issue that is often overlooked. Also, it should be noted that there is a difference between ‘natural’ and ‘synthetic’ genetic circuits. The Lac operon is one example of a well-characterized natural genetic circuit. By contrast, the repressilator represents a genetic circuit that was synthesized or assembled from different regulatory elements.

Given the established paradigm, it helps to first consider the electronic circuit. A simple explanation defines the electronic circuit as connected elements or components that permit the flow of electrical current. Typically, that electrical current derives from an external source (i.e. another circuit), which represents an input signal. In general, a genetic circuit is a series of interacting biological components that exert regulatory, actuator, and or signaling function(s). The circuit may also have one or more of the following characteristics listed below.

Despite their differences, both research thrusts employ so-called “top-down” – or decomposition – and “bottom-up” – or synthesis – strategies. In the study of complex regulatory systems, a top-down approach is employed to identify key elements of a regulatory pathway. However, this approach may yield an incomplete picture or a general lack of depth. In this scenario, bottom-up engineering of simpler synthetic circuit - representative of a more complex natural system - could facilitate investigations and afford a deeper understanding. This bottom-up approach is typically used when designing synthetic circuits. Still, some synthetic biologists now advocate for the use of top-down design for synthetic circuits[6].

The E. coli tryptophan (Trp) operon provides an interesting example of genetic regulation through input signal integration. In brief, the Trp operon regulates expression of tryptophan biosynthesis enzymes. In the presence of high tryptophan, Trp operon gene expression is undesirable. While transcriptional silencing depends upon tryptophan levels, two different detection methods are employed. When the concentration of free tryptophan is high, a tryptophan–activated repressor (trp repressor) will bind to operator sequences blocking transcription by RNA polymerase. Next, a short leader transcript (trpL) detects tryptophanyl-tRNA levels as the coding sequence has two sequential tryptophan codons. Sufficiently high tryptophan levels permit adequate aminoacylation of the tRNATrp and standard translation. After translation termination, the ribosome will dissociate allowing the mRNA to fold into a terminator, which ends transcription. Should tryptophan and tryptophanyl-tRNA levels be low, the ribosome will pause upon encountering the adjacent tryptophan codons. Ribosome stalling leads to formation of an antiterminator that allows the RNA polymerase resume transcription [7].

With regard to genetic circuitry, the Trp operon demonstrates a sophisticated control regulatory pathway. The Trp operon uses two different mechanisms to assess or measure the concentration of tryptophan in a cell. The trp operon then processes those signals in a synergistic manner to attenuate gene expression.

Salmonella has the adaptive ability to switch or toggle between two flagellin genes thereby avoiding detection by the immune system. This so-called phase variation represents a nature example of bistability; the bacteria can exist in one of two expression ‘states’ [8]. Interestingly, phase variation employs an inversion-mediated mechanism similar to recently published synthetic logic circuits [9][10].

The recently elucidated CRISPR/Cas system is one example of a natural genetic circuit that displays genetic memory characteristics. Bacteria take DNA sequences from invading bacteriophage and fragment those sequences thus generating small modules that serve as ‘memories’ of past challenges. During a subsequent infection, signal pathways induce the expression of Cas proteins as well as transcription from the CRISPR array where genetic memories of infection are stored. The CRISPR transcript is cleaved into single-stranded crRNA fragments that guide endonuclease Cas proteins to cleave phage DNA.

Trinity of Nature Papers from 2000

In 2000, Gardner and colleague reported on their "genetic toggle switch", which allowed E. coli to exist in one of two stable states for long stretches of time. The authors accomplished this feat by using two different promoters to drive expression of trans-acting repressors. In this system, a repressor protein would attenuate expression of the second opposing repressor protein. Following tuning experiments, a mutually antagonist relationship was created between promoter 1 and promoter 2. Promoter 1 drove transcription of 'lacI' (i.e. lac repressor). Promoter 2 drove expression of a biscistron containing either cIts (i.e. temperature-sensitive lambda repressor) or tetR (i.e. tetracycline repressor) followed by 'gfp(mut3)' (i.e. fluorescent reporter). With this system, researchers could toggle on or off the expression of GFP using IPTG and aTc or IPTG and transient incubation at 42°C [2].

In that same Nature issue, Elowitz and Leibler detailed assembly of a synthetic oscillator they termed the repressilator. This was done using a two plasmid system made up of the repressilator construct and a GFP reporter. Here, three repressors antagonize expression in a cyclical manner with one also functioning to control GFP expression. The authors included protease signaling tags for each strong repressor to reduce repressor half-life and so decrease oscillation periods. The repressilator was not entirely stable and suffered from noisy operation [3].

In the last of this 'trinity', Becskei and Serrano assembled a tetR-eGFP gene fusion driven by a promoter containing one of two operator pairs: tetO or lacO. The promoter containing lacO as well as a control expressing defective 'tetR' both demonstrated stochastic behavior marked by a wide distribution of fluorescence per cell. Conversely, a stable repressor-reporter hybrid driven by a tetO containing promoter adopted a more stable state as seen by the significantly more narrow fluorescence distribution. These experiments validated the theory that negative feedback created more stability in a system [4]. 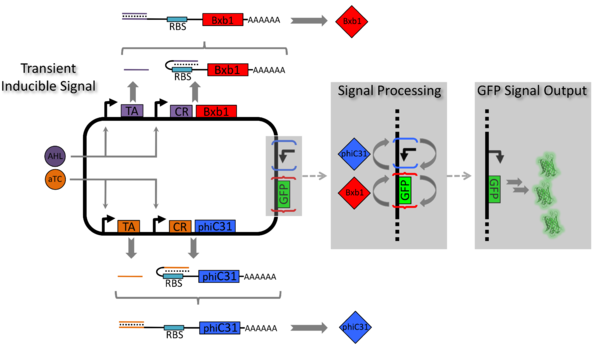 Two recently published articles exemplify many of the concepts listed above. In both publications, two orthogonal recombinases - also called an integrases - invert the orientation of DNA segments flanked by their respective recognition sequences. By arranging different flanked components (i.e terminators, promoters, and a GFP reporter gene), the researchers are able to assemble a logic gate, or logic cassette, that interprets a two-bit digital signal and produces a detectable output signal [9][10]. Here, the digital inputs are small molecules that induce expression of each recombinase and the analog output the presence or lack of constitutive (i.e. continuous) GFP expression.

Furthermore, the recombinase-based logic gates detailed in both articles display an aspect of genetic memory. Given the nature of this circuit - the circuit's output signal is constitutive expression of GFP from a logic cassette - it is possible to recall the results from a past signaling event. Siuti and colleagues report that E. coli cells retain the memory for at least 90 generations and memory recall doesn't require living cells. In brief, the memory of a signaling event can be assessed via PCR or sequencing methods[9].

By contrast, Bonnet and colleagues lend more attention toward thresholding and signal amplification. With regard to thresholding, the authors sought make activation of a logic gate more "switch-like". More specifically, the logic gate will switch to an active state in a narrow defined range of inducer (i.e. input signal) concentrations. Thus, the system is more sigmoidal than gradual and resembles an impulse or switch in states (i.e. 'on' and 'off')[10].

Below are several iGEM student projects that incorporate many of the above concepts and principles in order to create synthetic circuits.