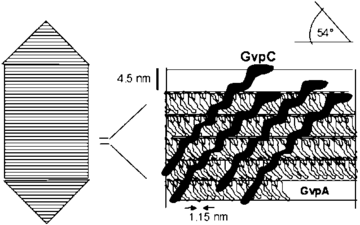 Gas vesicles are light-refracting, gas-containing structures found in some bacteria and Archaea species, including cyanobacteria and halophiles. They give the organism the ability to control its density, giving it buoyancy and allowing it to control its vertical movement in a column of water. The gas vesicle walls are comprised of only protein, without any lipids or carbohydrates, and are gas permeable. Gas vesicles allow cells to respond to conditions such as light and salt concentration.

Hammer, Cork and Bottle experiment done by Klebahn. A: The bottle of cyanobacteria on the left was hit with a hammer. The right bottle was untreated. B: The same bottles after a few hours. The hammered cyanobacteria lost buoyancy while the untreated ones did not.

In 1895, Klebahn showed that gas vesicles could be destroyed in cyanobacteria by applying pressure with his “Hammer, Cork and Bottle” experiments [2]. His suspicions about a membrane enclosed structure was confirmed in 1965, when Bowen and Jensen used electron microscopy to discover that some species of cyanobacteria had gas vacuoles that were made of stacks of cylindrical structures that they termed “gas vesicles”[3]. In 1969, Walsby found that gas vesicles were very gas permeable, and that the pressure inside them was equal to atmospheric pressure. In 1971, he also reported that the vesicles were susceptible to instant collapse under hydrostatic pressure, and suggested that cyanobacteria could be killed using ultrasound[4]. Walsby found in 1982 that gas vesicles are permeable to a variety of small gas molecules, including O2, N2, H2, CO2, and CH4[5]. In addition, the vesicles fill with gas through diffusion and thus no gas can be stored. In 1994 he found that liquid water cannot exist inside the gas vesicle because the high surface tension of the hydrophobic interior prevents entry and also because any water droplets that form will instantly evaporate[1].

Role of Gas Vesicles in Nature 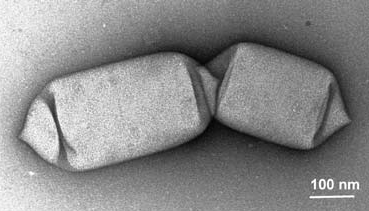 Halophilic archaea are salt-loving microorganisms that live in places such as the Great Salt Lake in Utah and the Dead Sea. Halobacterium salinarum, the first organism to have its gas vesicles characterized, uses bacteriorhodopsin as a light-driven proton pump that only work in an oxygen deficient environment[7]. H. salinarum prefers long wavelength light, and avoids UV light. When UV light is present, vesicle formation is suppressed, allowed the cell to sink further down. Thus, H. salinarum is typically found at a certain depth in water rather than at the surface. Another consequence of this positioning is that the cell are protected from rainwater that could cause lysis. Another organism, Haloferax mediterranei, produces gas vesicles only when salt concentrations are high[8]. These high salt concentrations are avoided since there is a very low oxygen concentration and salt crystals are likely to form, causing cell death.

Cyanobacteria require light to obtain energy, so it is important that they stay out of deep water, where light cannot penetrate. Vesicle production is promoted at low light levels and suppressed at high light levels which allows them to stay away from light deficient zones while keeping them away from the surface of the water. Anabaena flos-aquae uses gas vesicles along with carbohydrate sinking to regulate its depth. At low light levels, gas vesicles are produced and bring the organism closer to the surface. However, since UV light is harmful, it’s important that the cell stays below the surface. To counteract the gas vesicles, dense carbohydrates are formed during photosynthesis that cause the cell to sink. It is likely this mechanism that causes the waterblooms that appear in the morning to disappear by the afternoon[1]. 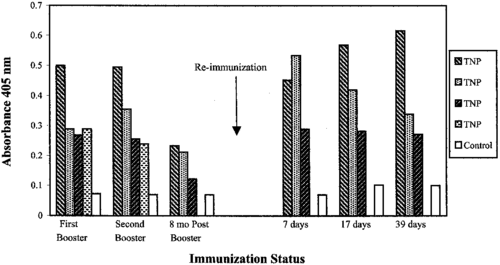 Traditional vaccines have used attenuated or killed pathogens in order to build up the immune response. However, this treatment has the risk of accidental infection or revival of an infectious form. A more modern approach would be to use a vehicle that presents the pathogenic antigens, enhancing the immunogenicity. An ideal vehicle would be able to (1) present a variety of antigens, (2) elicit a strong, long-term immune response, and (3) be inert in the corporeal environment. Stuart et al. believe that gas vesicles fit these conditions well[9].

They explored the possibility of using gas vesicles as a delivery system for antigens by first testing if TNP, a hapten, when bound to gas vesicles, could produce a immune response. TNP will not normally generate an immune response since it is too small for antigen-presenting cells to efficiently uptake. Four mice were initially immunized with TNP-GV and two additional boosters were applied. After each booster, the amount of antibodies increased. To test if the mice had lasting protection, immunization was reapplied after an 8 month period and subsequent levels of antibody were tested. They found that the antibody levels rapidly increased after re-immunization. Next, they tried to create recombinant gas vesicles that had a short peptide antigen attached to gas vesicle protein C (gvpC, the “glue” that holds together the gvpA shell), which they found to be immunogenic .

The 2009 Groningen team attempted to create an arsenic cleaning system. Arsenic is imported into E. coli through GlpF, a transporter that imports glycerol, arsenic, and antimone. However, to prevent the toxic arsenic from damaging the cell, they added a metallothionein , a protein that can be used to safely store and distribute the metal. They connected the arsRr promoter, which becomes open for binding in the presence of arsenic, to a gas vesicle protein gene cluster from bacillus megaterium. The complete circuit will thus uptake arsenic, store it, and cause arsenic rich cells to float to the surface of the water, allowing for easy collection.

While the 2008 Kyoto team did not flesh out their project, they had an interesting idea: to use E. coli to lift up the titanic from the sea floor. Their system is comprised of three parts: (1) glue proteins Titanium-binding peptide and polystyrene binding peptide, (2) gas vesicles, and (3) flagella. The glue proteins display a peptide on the surface of the cell, bonding the bacteria to the surface of the ship. The gas vesicles are connected via quorum sensing, so that they all produce their gas vesicles at the same time. Finally, they use light sensitive flagella that are only transcribed in the dark so that they push towards the light.

With regards to synthetic biology, there has not much much work done using gas vesicles. Since the genes of the gas vesicles are known and sequenced, the next step would be to actually implement a system that takes advantage of their buoyant properties, similar to what the Groningen iGEM team was try to accomplish. It would also be beneficial to characterize the formation of gas vesicles since there may be an aspect of their assembly that can be useful. Finally, gas vesicles are limited in use because gas can only enter through diffusion, limiting control of the buoyant force and preventing storage of gas.