Scientific knowledge is an enabling power to do either good or bad - but it does not carry instructions on how to use it.

Bioethics is the study of ethical questions and problems within the field of biology. Bioethical questions may concern the entire planet (What amount of change to the biosphere of the Earth is morally acceptable?), or could be on a deeply personal level, such as the selection of certain genetic traits for a future child. For the purposes of this course, we'll go even smaller, all the way down to microbes, and the ethics of using synthetic biology to modify and improve microbes in the service of humanity. Of course, the products of synthetic biology do not exist within perfectly impermeable bubbles, so the net impact of synthetic biology upon both humans and non-humans must be considered.

The Presidential Commission for the Study of Bioethical Issues (PCSBI) published a report in December 2010 regarding the ethical ramifications of synthetic biology. This report was requested by U.S. president Barack Obama, in response to the announcement in May 2010 of the first self-replicating synthetic genome, belonging to the organism Mycoplasma mycoides JCVI-syn1.0 [1]. The major findings of the commission can be summarized as letting research proceed without regulation, as the existing guidelines and self-regulation of scientists is currently sufficient. Strong regulatory policies were deemed to have a net negative effect by too broadly hampering research efforts, with little increase in safety. Instead, the government should encourage regulation at the institutional level (with periodic reviews of the state of the art). There is also a call for an organization that fact checks the claims of synthetic biology, and there should be a general effort to educate the public on new developments.

Ethics is part of the iGEM competition because teams are required to document their safety practices and the ethical implications of their projects[2]. This requirement could be extended to be the focus of the project, such as a computational effort demonstrating the ease with which a potential bioterrorist could assemble a viral genome. Other projects could include a wetware approach that uses microbial detectors to identify potential biological threats, or chemical detectors for toxins.

Religious and secular approaches to the ethics of synthetic biology 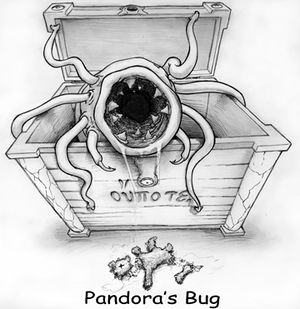 The term "synthetic biology" could almost be calculated to elicit a strongly negative response by anyone with a belief in the beauty of naturally evolved DNA.

According to the PCSBI, there were "...relatively few objections from religious or secular ethicists concerning the present status of the field" [3]. Although the accusation of "playing god" is used often (primarily by sensationalist headline writers), it is usually found in a secular context, accompanied by the semi-secular equivalent of "messing with Mother Nature" [4]. Such concerns can be easily dealt with by scientists that can properly interact with the general public (and which refrain from hubris and grand proclamations). Deep-seated opposition to synthetic biology is only found at the fringe of society [4], and most mainstream religious philosophies are generally accepting of current synthetic biology technologies. Christianity justifies synthetic biology through stories from the bible, such as the parable of the talents [5]. The standard Christian explanation of this parable is that it is wrong for humans to squander their intelligence, and we are morally obligated to increase our power and expand our scientific knowledge [6]. There is also the command found in Genesis to be fruitful and multiply, and to rule over the creatures of the world, which is often interpreted as supporting research into the inner workings of organisms.

Secular objections to synthetic biology can be found in the "Deep Ecology" philosophy, which emphasizes the right to life of all living things without regard to their value to humanity. Intrinsic to this philosophy is opposition to humanity's current domination and control of Earth. Therefore, the efforts of synthetic biologists to finely control organisms (albeit simple single-celled organisms) represent the latest attack by humanity on Nature. It is doubtful any reconciliation between scientists and deep ecologists could be made, given that a fundamental property of science is the testing and quantification of the natural world. Opposition to the power of corporations is also a basis for criticizing advances in synthetic biology[7]. Such objections are not opposed outright to the use of science, but rather to its abuse in the unchecked pursuit for profits, and may in fact represent a more ethical approach given the destruction wrought by multinationals in mining, petroleum, and chemical production.

Senator from Vermont: You're absolutely sure it worked? You'd better be!
Dr. Jeremy Stone: All reports continue to indicate that the experiment was successful, Senator.
Senator : Then we can feel confident your so-called "biological crisis" is over?
Stone: As far as Andromeda is concerned, yes. We have the organism at Wildfire, and we continue to study it. We know now beyond a doubt that other forms of life exist in the universe. However, with this new knowledge, there is no guarantee that another so-called "biological crisis" won't occur again.
Senator: Hmm. What do we do about that?
Stone: Precisely, Senator. What do we do?
The Andromeda Strain (1971)

The tools of synthetic biology can be considered "dual-use" technologies, which can be used for productive, useful applications, but also for weapons of mass destruction. Therefore, synthetic biology's potential to benefit humanity must be weighed against the potential development of bioweapons. The creation of such bioweapons may be the reconstruction of a previously eradicated disease such as smallpox [8], increasing the lethality of existing diseases [9], or create entirely new diseases. A key consideration when weighing these possibilities is the resources and knowledge required to create a bioweapon. Will our biological future mirror the computing world, where malicious programs are easily available for relatively inexperienced hackers, and the most sophisticated are used in cyberwarfare between antagonistic nations? 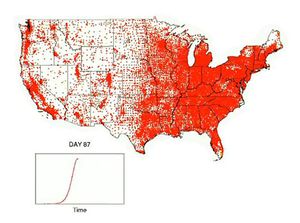 Day 87 of a simulated Avian Flu outbreak. Such an outbreak could be the result of evolution in the wild, or modification by malicious biologists.

Creating a bioweapon previously required resources and training that was only available to powerful industrial nations, such as the Soviet Union and the United States during the Cold War. This limited the possibility of a biological attack to a world war (and which would be the least of the worries of the irradiated survivors of such an event). The advance of science then rendered smaller nations able to develop bioweapons, and we are now in a situation where a single lab could develop a bioweapon. Extrapolating from current trends in DNA synthesis costs, computer aided design, and increases in the sophistication of DIY biology will likely lead to the ability of small groups, or even single individuals, to wreck havoc with home brewed bioweapons. Returning the computer virus analogy, humanity could experience a future where the biological equivalent of black-hat hackers release viruses into the world. However, instead of stealing credit card numbers or emptying bank accounts, these "biohackers" could be introducing a lethal strain of the common cold, or an aerosolized Ebola virus. Unfortunately, it is difficult to imagine how such a future could be prevented without draconian restrictions on the use of tools and techniques required for beneficial biological research, and so the focus will have to be on the rapid detection, isolation, and treatment of bioweapon attacks [10].

As part of the effort to prevent attacks, screening of all sequences ordered from DNA synthesis companies is recommended. However, these are merely guidelines recommended by the government, not requirements that can be enforced by inspections and legal action. There is also concern that these guidelines are not tough enough, and were actually weaker than what companies had already been doing. Also, there is concern that using a fully automated process that relies on homology matches to a narrow selection of pathogens from GenBank will let many sequences slip through the screening.[11]

The less thrilling side to biosafety is the possibility of accidental releases of modified organisms into the environment. Individuals and small groups of amateur biologists typically do not have access to standard biosafety tools found in research laboratories, and are therefore unable to follow biosafety guidelines [2]. such as biological containment hoods, autoclaves, and waste disposal. Another type of accidental release could be the "release" of genes from one organism to another species, via horizontal gene transfer. Given the difficulties synthetic biologists have when trying to make genes from a different species function properly in another species, it seems unlikely that accidental transfers of genetic material could result in any significant biological hazards. It is possible that there are "invasive genes", just as there are invasive species that wreck ecosystems (although even this analogy implies that an "invasive gene" would be far more likely to harm or have no effect on the recipient organism).

Our sun is one of 100 billion stars in our galaxy. Our galaxy is one of billions of galaxies populating the universe. It would be the height of presumption to think that we are the only living things in that enormous immensity.

There are several possibilities for extraterrestrial life in our solar system, such as Mars, Europa, Titan, and Enceladus. If life were to be discovered outside the Earth, it would vastly increase the scope of biochemistry and biology, but it would also present ethical challenges. Astronauts currently follow the Planetary Protection policy laid out by NASA [12]. This policy is concerned with limiting the contamination of the rest of solar system with Earth organisms, and reducing the risk of bring extraterrestrials to Earth. Any discoveries would obviously require a complete overhaul of the policy, with regard to issues such as the mixing of alien and terrestrial ecologies and the potential for invasive species (either by Earth organisms, or by alien microbes). There is also the risk for the destruction of indigenous microbes through the ordinary course of human expansion into space. If microbes are found on Mars (such as deep under the surface, or within the polar ice caps), would it be ethical to terraform the planet, since we value the desires of humans over those of microbes? Or would terraforming (which would likely kill anything that had evolved to live on Mars) be unethical, as it would destroy the only other known occurrence of life in our solar system?

Ask a biosafety professional! -If you get your question answered, link to it!