Biology is a rich source of inspiration for engineers. Here a basilisk lizard runs on water. [1]

Biologically-inspired materials combine material science and biological structure. Materials science involves the study of atomic structure and the interaction of elemental units to form composite substances with complex properties and high performance for many different technological applications. Biological structures are naturally evolved materials that have been refined to serve specific functions in environmental niches. Often times, the properties that make biological structures useful in their natural habitat also make these structures useful for human use. For example, silk is impressively strong and tough, but extremely thin. This has made silk a valuable tool as a medical suture.

Biological structure can often be distinguished from traditional synthetic materials in that it usually displays the following characteristics[1]:

Biological structures, like silk, achieve their material properties by controlling their molecular structure and composition. This can result in materials with

Often times, these materials are lightweight as well [1].

The repurposing of refined biological structures has led to many useful products:

Velcro was inspired by plant burrs, self-cleaning surfaces [2] were inspired by lotus leafs, and shark skin has inspired technology that reduces drag in pipelines, and Sharklet, which prevents bacterial colonization on medical devices in hospitals.

Examples include spider silk, mussel adhesion protein, and barnacle cement. Here, a small number of gene products are responsible for a useful biological material; however, the amount of total product produced by an individual organism is small. The difficulty of harvesting or maintaining large numbers of these organisms makes it costly for use of the material commercially. The small number of gene products does lead, however, to potentially producing these materials in non-native hosts.

One prime example of the effort to produce a valuable biological material at industrial scale is spider silk.

Spider silk possesses impressive material properties. It has a strength-to-weight ratio close to high-tensile engineering steel (1.1 GPa for silk vs 1.3 GPa for steel). It has an extensibility (“stretchiness”) value more similar to nylon (0.27 for silk vs 0.18 for nylon). And it has a toughness (allowed deformation before failure or fracture) factor greater than rubber (160 for silk vs 100 for rubber) [3]. This unique combination of properties makes spider silk a material of particular industrial interest.

Spider silk has been proposed to be useful for surgical sutures, body armor, and artificial tendons and ligaments among other things.

The European garden spider (Araneus diadematus) and the golden orb-web spider, Nephila clavipes, are two spiders whose silk genes have been studied extensively. The major silk genes in A. diadematus are ADF-3 and ADF-4, while in N. clavipes, they are MaSpI and MaSpII.

Industrial scale production of spider silk has been a longtime goal in the field. Unlike silk worms (Bombyx mori), spiders are aggressive and territorial, which makes them difficult to domesticate and farm. This has led to the pursuit of recombinant strategies. High production of recombinant spider silk proteins, however, has also been a challenge. Spider silk proteins are large (up to 15 Mbp) and highly repetitive at the sequence level. Bacterial expression hosts have different codon uses and natural machinery that promotes recombination of repetitive sequences. This has limited the production yields of natural spider silk in bacterial hosts [4]. Multiple other hosts have been used including yeasts, plants, mammalian cells, insect cells, and transgenic animals [5]. Widmaier, et al. engineered a type III secretion system to export silk monomers designed for enhance stability and codon usage [6]. (Widmaier has a startup company called Refactored Materials trying to commercialize synthetic spider silk [7].) No system has proven ideal yet and each requires tradeoffs including cost, yield, and convenience. [8] 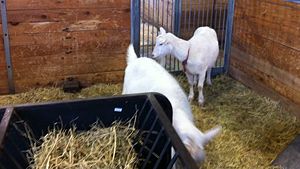 Spider goats, Sugar and Spice, at the Canada Agricultural Museum [4]

One particularly interesting approach to spider silk protein production was through transgenic goats. In the early 2000s, Jeffrey Turner and Paul Ballard, founders of Nexia Biotechnologies, were looking for a new product. Randolph Lewis of the University of Wyoming had developed a method for introducing a gene of choice into a goat mammary tissue. Lewis licensed the technology to Nexia and BioSteel was born. Nexia went public in the year 2000 to the largest Canadian IPO in history (at the time) at $42.4 million [9]. Nexia ultimately never developed a commercially viable BioSteel product and the company went bankrupt in 2009. However, the resulting transgenic "spider goats" still remain. Two goats, Sugar and Spice, were sold to the Canada Agricultural Museum [10].

In addition to producing spider silk proteins, industrial scale production of spider silk is only achievable with optimized spinning techniques. This is a crucial component to viable silk synthesis as the microstructure of silk fibers determines the mechanical properties of the silk fibers. Naturally, spiders attach their dragline to an object and then move away or use their weight to draw the silk. If forcibly drawn, spider silk loses many of its beneficial material properties. If artificially spun, spider silk typically falls short of the mechanical properties of natural spider silk. For example, artificially spun fibers reached a minimal diameter of 40 μm; whereas, natural fibers can obtain diameters of 2.5 to 4.0 μm. Different draw ratio, speeds, and solvent usage all effect the material properties of the resulting silk fibers. The conditions needed to achieve the same performance in synthetic fibers as in natural silk fibers have yet to be determined [11].

The interest in biological materials goes beyond just spider silk.

Mussel glue is a tyrosine-hydroxylated (dopa) protein that if produced reliably and in bulk quantity, would be useful for its underwater adhesive property. It could be used to attached sensors under the water or repair “wet” living tissue [12]. Choi, et al. showed that mussel adhesive protein can be expressed and modified in vivo in Escherichia coli [13].

The spicules of sponges are composed mainly of silicatein-alpha. Recently, Natalio, et al. showed that recombinant expression of silicatein-alpha proteins in the presence of CaCl2 and CO2 will self-assemble into synthetic spicules that show strong bending strength (Young’s modulus of 14 GPa, which is similar to human bone) [14].

In another example of bio-inspired materials, researchers at the Wyss Institute for Biologically Inspired Engineering observed that the carnivorous Nepenthes pitcher plant has an extremely slick surface that causes prey to fall into the bottom of the plant where there are digestive juices. The SLIPS (Slippery Liquid-Infused Porous Surfaces) technology uses a microporous structure to trap a lubricating liquid that repels a wide variety of substances from water to hydrocarbons to crude oil [15].

The 2008 Imperial College iGEM team attempted to make a B. subtilis platform for inducing production of biomaterials. Their target proteins appeared to be human elastin or EAK16-II, a beta-sheet self-assembling peptide.