Ancestral Sequence Reconstruction refers to the construction of hypothesized protein or DNA sequences belonging to a common ancestor of extant proteins or DNA. It enables scientists to synthesize biomolecules from extinct organisms. Sequence information (Nucleic Acid and Protein) from extant species can be used to infer the sequences of common ancestor species which can be synthesized and tested in the lab. The method was originally discussed by Pauling and Zuckerkandl in 1963[1], almost 30 years before the theory was experimentally tested.

Expression of archaic proteins in extant organisms such as E. coli may require codon optimization to allow for proper expression[2]. Synthesized genes are typically cloned into a vector and used to transform a host organism.

As the technology for ancestral sequence reconstruction has advanced the technique has popularized. It offers a unique way to peer into the past and revisit the biomolecules of our forefathers. The sensitivity of genetic information to degrade limits our understanding to extant organisms or circumstantially preserved ones, such as specimens preserved by ice. The ability to resurrect sequences from the dead and test them relieves us from these temporal limitations. 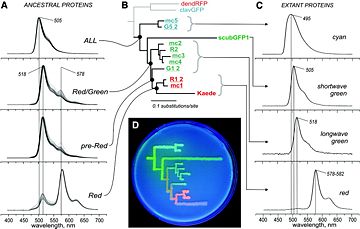 One example of ancestral sequence reconstruction was done by the Matz group (currently residing at the University of Texas at Austin). Fluorescent proteins from related coral species had wavelengths corresponding to Cyan, Green, and Red[3]. The details of the evolution of fluorescent color in the GFP superfamily was not fully understand. That is, what fluorescent spectra did the common ancestors of the modern corals have?

Different models for reconstruction based on amino acids, codons and nucleotides resulted in reconstructed proteins differing in 4-8 amino acids out of 217. Gene synthesis utilized codons designed "to be degenerate in order to incorporate alternative predictions." [3] The reconstructed sequences included red, pre-red, Red/Green and ALL. The ancestral sequences revealed an interesting evolutionary history. The ancestor to all the coral fluorescent proteins had a single green peak at 505nm. Gradually, a shift towards greater expression of lower wavelengths developed, culminating in the pre-red protein. One branch of pre-red went on to lose the ancestral green peak and develop a strong peak around 580nm. Modern red features significantly less emission at outside of the primary peak, thereby increasing its specificity compared to recent ancestors such as pre-red and Red/Green. According to Ugalde et al., incremental gains in protein function "[have] been anticipated since Darwin, but has only recently been demonstrated in computer simulation experiments"

Inferring the Paleoenvironment of ancient Earth

Ancestral sequence reconstruction has been used to infer the environmental conditions on the early Earth[4]. The study sought to explore the evolutionary history of an elongation factor thermo unstable (EFtu). This elongation factor functions optimally at the temperature which the organism lives, for example thermophilic organisms have an EFtu optimized for high temperatures. By resurrecting the EFtu protein in the common ancestors of bacteria, the temperature profile might elucidate what the environmental conditions were. Interestingly the EFtu common ancestor to all mesophilic bacterium (~1BYA) has an optimal temperature of a thermophile. This suggests that the hypothesis of a hot early Earth is true. 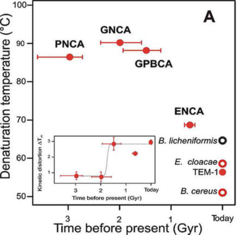 The structure of the last common ancestor to extant β lactamase has been reconstructed and tested using Ancestral Sequence Reconstruction[5]. Sequences for β lactamase from 75 bacterial strains, whose last CA lived 2-3 Gya, were compared. To exclude the effects of recent antibiotic driven evolution, only non-clinical varieties were chosen. Using Bayesian statistics, Risso et al. calculated the most probabilistic ancestral amino acid for each point in the sequence.

Perez-Jiminez et. al resurrected various Precambrian Thioredoxins. These belonged to the last common ancestors of the last bacterial common ancestor (LBCA), the last archaeal common ancestor (LACA) and the archaeal-eukaryotic common ancestor (AECA)"[2]. All of these sequences are believed to have been present over 3.5 Gya. The amino-acid sequence in each case was determined by maximum likelihood inference from 200 extant sequences. The genes to code for these proteins were synthesized and cloned into E. coli for expression and purification.

All three reconstructed proteins showed a Tm around 113°C, with a ΔTm between the highest extant Thioredoxin and the ancestors of around 25°C. The three paleo Thioredoxins also showed substantially greater activity at pH5 than representative extant enzymes from the each domain. The lower substrate specificity exhibited by the reconstructed enzymes indicates the abundance of sulfur rich compounds in the early oceans of Earth, and also hints at the generalist nature of archaic enzymes.

Ancestral sequence reconstruction holds various benefits. The most direct benefit is a better understanding of archaic organisms and the world they inhabited. Numerous ancient protein reconstructions have yielded enzymes that are much more thermally stable than extant derivatives, even those found in thermophiles, leading to stronger evidence for extremely warm global conditions prior to 1 Gya[6]. Archaic proteins also allow for greater study of evolvability, as many reconstructed proteins feature high promiscuity[5]. The patterns in the evolution of high promiscuity Precambrian β lactamase, for instance, could help further the fight against the development of antibiotic resistance. High promiscuity is also key to directed protein evolution. In addition, the reconstruction of archaic enzymes serves as a sort of paleo-bioprospecting[2], and is currently the best approach to expand thermal stability and pH tolerance in enzymes[7]. The enzymes discovered through this form of prospecting and those developed through directed evolution of promiscuous enzymes could serve functional roles in human engineered systems.