Algal biofuels represent various methods to produce highly reduced hydrocarbons from carbon dioxide using solar energy as the power source and algae, typically microalgae, as the machinery. The primary driving point for photosynthesis powered biofuels is that they do not increase the net carbon content in the air; every molecule of CO2 released during combustion came from one molecule of CO2 fixed during photosynthesis. Since their energy source is sunlight, algal biofuels are considered renewable. Algae are top choices in biofuel engineering due to their far greater photosynthetic efficiency and low growth requirements. In addition, countries that lack reserves of fossil fuels may desire economic independence by reducing imports through domestic fuel product.

Advantages over other Biofuels

Microalgae tend to have better photosynthetic efficiency than terrestrial plants, including corn and soybeans, the other major sources for biofuels[1]. Sugarcane, a major source of bioethanol, has a photosynthetic efficiency (that can reach 8% under optimal conditions, although it is more typically around 1%[2]. However, microalgae are far better at producing biomass per unit land, as they can produce up to 158 tonnes/hectare, compared to 75 tonnes/hectare for sugarcane[3]. In addition, microalgal dry mass can be up to 55% lipid, which is most relevant to biofuel production and is far greater than what can be managed by terrestrial plants[4].

When it comes to biodiesel production, microalgae greatly outdo their competitors. Biodiesels are defined as methyl- or ethyl- esters of 10-14 carbon fatty acids. Some other sources, such as soybeans and oilpalms, can reach barely 5% lipid dry mass under highly optimized conditions[3]. Microalgae can, even at a modest 15% lipid dry mass, would require only 10.8 million hectares (or 6% of US agricultural land) to produce the 530 million m3 of diesel consumed each year at present. Oil palms, in comparison, would require 61% of US agricultural land to produce the same amount. Sugarcane derived bioethanol, with 64% of the energy content of biodiesel, would require a similar amount of land to produce an amount of energy equivalent to 530 million m3 of diesel[3]. 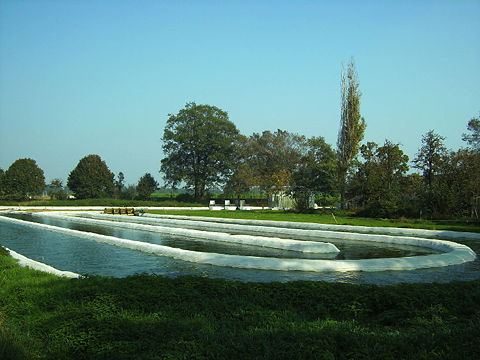 A Raceway Pond aquaculture. This method of aquaculture allows for good mixing and light exposure at low cost, although gas exchange, temperature control and sterility are poor[5].

One of the most distinct advantages of microalgae over other photosynthetic organisms is their tolerance and/or preference for marginal water sources[6]. This means that algal biofuels won't have to compete for resources like fresh water and arable land with food crops, unlike biofuels derived from corn and soybeans[7]. Most commercially relevant algal species grow well on either seawater or wastewater, both of which are inexpensive alternatives to freshwater[8].

For economical reasons, the majority of algal aquacultures today are open-air[5]. While this normally vastly opens up the risk for contamination, several of the most important algae, such as Chlorella, Spirulina and Dunaliella have traits that allow them to outgrow competitors under certain optimal conditions. That said, the future of algal biofuel reactors is likely to take place under closed conditions. Maximized efficiency in biofuel production is highly dependent on non-contamination and the absence of certain heavy metal pollutants that would be present in open aquacultures. 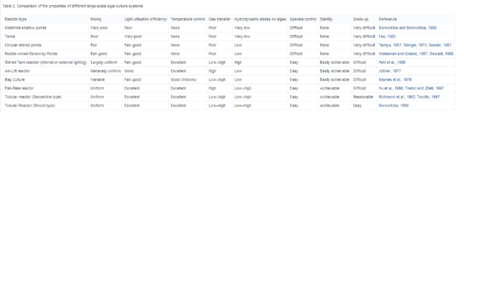 Photoinhibition, a result of the oxidative damage done to electron carriers in light reactions, is one of the first hurdles to jump[10]. Truncated chlorophyll antennae show reduced levels of photoinhibition, resulting in less down time and therefore greater photosynthetic efficiency during the light reactions. In large growth cultures, antenna truncation also reduces light scattering, allowing greater access to appropriately energetic photons to the cells further from the surface of the liquid.

Maximizing the lipid content of algae allows for the greatest energy content per unit land, and increases the energy return on extraction processes[4]. In chlorella, lipid accumulation tends to be greatest during the stationary phase. Media rich in iron, nitrate and phosphate is optimal in chlorella for maximum lipid content, with the highest achieved lipid dry cell volume being 55%.

One obvious problem to maximizing lipid yield is the fact that cells often use lipids as an energy source through β-oxidation. Inhibition of β-oxidation through gene knockouts is quite useful for algae grown under constant light conditions, but does retard growth in algae grown under natural light[11]. In the absence of light, algae typically live off of triacyl glyecerol; if they are deprived of this food source, their growth rate is inhibited, and net lipid production over time may actually be lower than in algae that are wild type for lipid catabolism.

The lipids that cells produce normally have to be chemically treated to form ethyl esters that can be directly used as biofuel[11]. Overexpression of ethanol synthesis from Zymomonas mobilis and wax ester synthase genes from Acinetobacter baylyi in E. coli produced slightly better ethyl ester yields, although these yields are expected to be greater in microalgae.

It is also possible to make long chain alkanes using algae. Microalga B. braunii is known to produce di- or tri-ene single chain hydrocarbons, but the chain lengths it produces (mostly >22 C) are too long to be directly used as fuel[11]. 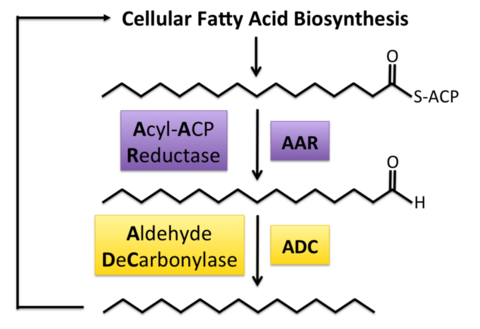 The University of Washington's 2011 iGem Team attempted to use Fatty Acid intermediates into alkanes[12]. They used Acy-ACP Reductase (AAR) to convert long Acyl-ACPs into aldehydes, and then used Aldehyde Decarbonylase (ADC) to convert them into alkanes.

AAR and ADC are both taken from Synecocchus elongatus[12]. The primary products of expression in E. coli were 13, 15 and 17 C alkanes, with a small component of 17 C alkenes. They claim to be trying (as of fall 2011) to increase yields, change the primary products and shift the system into yeast.

The future of biofuels in general seems mixed. The greatest challenge is maintaining net energy production; typically, the usage of fertilizing chemicals and artificial light are incompatible with economic feasibility. Algal biodiesel faces a challenge compared to bioethanol and petroleum products in that the latter two are thoroughly subsidized by the federal government in the US[13].

On the scientific front, many issues remain regarding optimization under specific growth conditions. Further development is closely linked to the economic issues. For example, closed reactors provide a straightforward way to prevent contamination, but add to the energy consumption of the cultivation process; engineered strains that are highly resistant to contamination in open air cultures would reduce or eliminate this barrier. Much of the research into increasing photosynthetic efficiency at high light intensities might be for naught, as the cost of the light source could result in net negative energy production. A similar case exists with nitrate and phosphate rich cultivation media.

Nonetheless, microalgae do provide a way for producing fuels with no net change in atmospheric carbon. Improved bioreacters and better engineered strains constantly change the energy output for the better. While significant work needs to be done before algal biofuels will be replacing fossil fuels en masse, that work in well on its way.