TA systems are gene addiction constructs that occur naturally in prokaryotes, eukaryotes, and archaea. They consist of two coexpressed proteins: a stable toxin and a labile antitoxin that inhibits the detrimental effects of the toxin on the cell. If expression of the TA gene cassette is inhibited or the genes are purged from cell (from losing a plasmid carrying the TA genes, for example), the labile antitoxin in the cell degrades faster than the stable toxin. The newly uninhibited toxin then exerts its affect on the cell, resulting in growth inhibition or cell death. TA systems work by a wide variety of mechanisms, delineated into three major classes based on the interaction of toxin and antitoxin. TA systems can be located in selfish plasmids or chromosomally; TA systems in plasmids tend to result in cell death whereas chromosomally located TAs tend to be bacteriostatic. The exact mechanisms of action vary greatly between TA systems and a number of reviews have attempted to address most of their variation [1] [2].

The canonical example of a Type I TA system is the hok-sok system, originally identified in the E. coli plasmid R1 in 1986 [3]. In this system, both the toxin (hok) and antitoxin (sok) are expressed on the plasmid. Left by itself, hok protein results in membrane depolarization, the cessation of respiration, and cell death in most gram-negative bacteria. After transcription, hok mRNA is functionally inactive due to extensive secondary structure. Upon processing of the 3' end of hok transcript, two alternative pathways exist. Sok RNA is complementary to a large portion of the hok transcript. If sok transcripts, it will bind to the hok transcript and the pair will be degraded in an RNase III dependent manner. If sok transcripts are unavailable, hok transcripts will be accessible to translation machinery and result in the production of the toxic hok protein [4]. 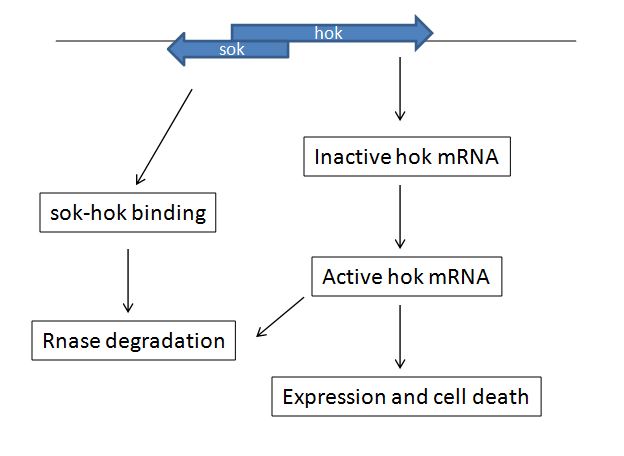 In Type II Systems, antitoxin proteins bind to and inhibit toxin proteins. Generally the instability of the anti-toxins are dependent upon the presence of specific proteases.

The canonical example of a Type II TA system is the ccd system isolated from the F plasmid. The toxin in the ccd system, ccdB, causes cell death by acting as a gyrase poison. The ccdB protein binds to and stabilizes the DNA-gyrase complex and a cleavage intermediate and causes double stranded breaks in a replicating genome [5]. The coexpressed ccdA antitoxin protein binds to the ccdB protein and inhibits its toxic mechanism. ccdA, however, is constantly being degraded by ATP-dependant Lon protease. If expression of the ccd operon stops, the ccdA population in a cell will rapidly degrade and free the stable ccdB protein to exert its toxic affects. 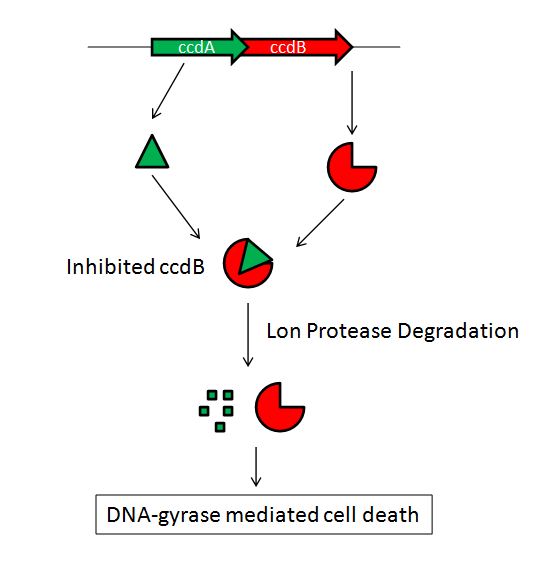 With only one example recently characterized, type III systems work by a small RNA antitoxin directly binding to and inhibiting the protein toxin. While the exact toxic mechanism has yet to be extrapolated, the ToxIN abortive infection system's ToxN has been shown to inhibit bacterial growth and is counteracted directly by ToxI RNA [6]. Through its altruistic limiting the spread of a phage infection through a population, the ToxIN system demonstrates the functional versatility TA systems can have.

While TA systems are functionally robust, it is not always beneficial to be construct an arms race within a host strain nor to include the accessory genes that are needed to allow many of them to function properly. An alternative strategy of genetic addiction is to harbor key metabolic genes, such that the host must maintain the genetic element to gain that metabolic functionality.

The most common strategy is an anabolic-based system. Here, a key biosynthesis gene is disabled with the host genome and then supplemented genetically on the element that one wants to maintain. Amino acid synthesis pathways are popular targets as one can preclude them from growth media to ensure plasmid maintenance in growing cells. Common genes used in yeast as auxotrophic supplements are LEU2 and URA3, required for leucine and pyrimidine biosynthesis, respectively. Another strategy is a catabolic based system, where a gene is supplemented to restore a pathway required to break down a required nutrient. 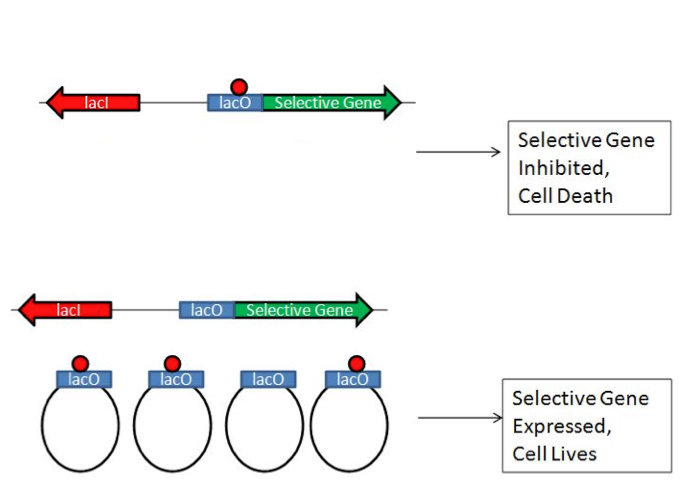 With an ever increasing amount of products being produced through bacterial fermentation or other cell cultures, it becomes increasingly important to consider how best to produce biotechnology products in an economic and scalable fashion. Using antibiotic based selection mechanisms can sometimes be problematic when producing microbial products on the industrial scale due to antibiotic cost and the necessity to remove antibiotics from downstream wastes for pharmaceuticals. Additionally, there is the concern that antibiotic containing fermentation waste could result in passing antibiotic resistance genes into the environment and exerting enormous selection against the effectiveness of these antibiotics [8]

One major concern with generating genetically modified organisms for general use it the ability to contain their spread beyond their intended use. In particular this is a concern in the field of bioremediation. Generally this relies on driving the expression of the TA system an externally supplied inducer, such that if the organisms will die leave the presence of the inducer. While this is an attractive model as loss of the complex would fatal to the organism, rapid emergence of resistance against the toxin without secondary selection doesn't make it fool-proof [9]. More success has been found by pairing TA systems with other selection strategies such as nutrient limitation [10] or additional TA systems [11], although escape from the containment systems was only slowed and not stopped. The only system that demonstrates a lack of mutational deactivation that has been demonstrated was a system in P. putida that linked an effector molecule to the production of multiple essential metabolites [12].

Another issue with current approaches to biocontainment is that they do not control for horizontal transfer of the TA containing plasmid. If a competent organism takes up the construct and still has access to the inducer of the system, this could represent a breach in biocontainment. A solution to this has been proposed conceptually in the latest iteration of the TA based containment system [13]. In their TA system, two TA systems are used; one has its toxin located in the chromosome and its antitoxin located on the plasmid while the other has its toxin on the plasmid and its antitoxin in the genome. Toxins are constituitively expressed and antitoxin expression is induced in a manner dependent upon its catabolism of the environmental contaminant it is processing. If the plasmid is lost, the unpaired toxin will kill the host. If the plasmid is transferred, the unpaired toxin will kill the new host. If the pollutant runs out, all cells will die through the action of both toxins. This system relies on a universally functioning toxin and has yet to be constructed successfully, but it represents a possible way forward for the use of TA systems in biocontainment.

The presence of chromosomally located TA pairs in bacterial strains provides a novel antimicrobial target. If one were to inhibit the antitoxin's function in a TA containing host, they could selectively inhibit growth or kill the TA containing cells. This concept was tested in 2006 when a peptide nucleic acid was used to sequester sok-RNA in E. coli and triggered hok-mediated cell death [14].