Toggle switches, repressilators, and counters are synthetic biological information processing systems to control gene expression based on environmental cues.[1] Counters use memory and time delay to process the frequency of an event which has applications in recording environmental conditions. Toggle switches use memory by switching into one fixed state following its induction signal which could be applied to detecting pollutant levels in the environment. The toggle switch could keep memory of a certain level of a pollutant and display a reporter gene as a signal.[2] For example, June Medford from Colorado State University has engineered toggle switches in plants that turn off chlorophyll production and turn white when they detect explosive chemicals. 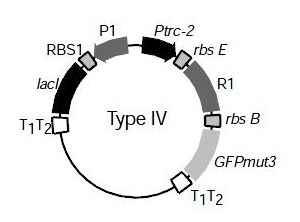 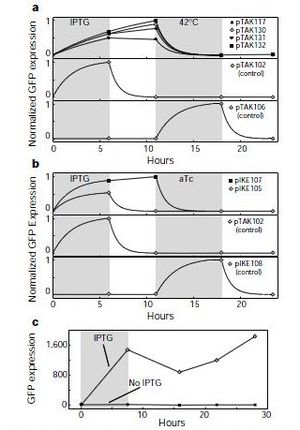 The pIKE plasmid toggle switch differs from the pTAK plasmid by the P1 and R1 genes.[3] In pIKE, P1 is the PLtetO-1 promoter and R1 is tetR. This toggle switch is flipped by IPTG or aTc pulses.

Gardner et al designed pIKE and pTAK with different ribosome binding sites to determine bistability under different conditions, and all but one pIKE plasmid conferred bistability which is possibly due to the fact that tetR has less efficiency than the pTAK λ repressor. To test the bistability, the plasmids were induced with IPTG for 6 hours to express fluorescence, called the high state, and then grown 5 hours without IPTG. Plasmids that remained in the high state display bistability and ones that return to low states display monostability. Afterwards, the plasmids were treated with heat or aTc as appropriate for 7 hours to turn off GFP expression then removed for 5.5 hours; plasmids that remained in low state are considered bistable. 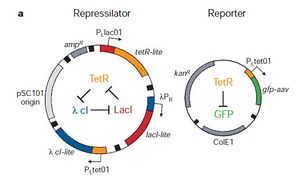 A repressilator is a synthetic gene network that uses the repression of genes in a negative feedback loop to create an oscillating network measured by GFP expression.[4] This network involves three genes, each of which promote the expression of the repressor of the next gene. 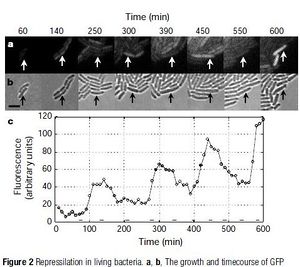 In order to have proper temporal oscillation display rather than a single fixed state of transcription of the repressors, the repressors need to be strong, ribosome binding needs to be efficient, and the mRNA and protein decay rates of each gene need to be similar.

Elowitz and Leibler’s experiment is significant in the fact that it shows the ability to construct functional synthetic networks from common genes. Also repressilators have been likened to circadian clocks in organisms like cyanobacteria which oscillate in 24 hour patterns due to environmental change between night and day. The circadian oscillators are much more precise and efficient, however, which could be accounted for by the fact that they use both positive and negative feedback.

The 2010 USTC iGEM team created a model to simulate a repressilator as part of their project.

Synthetic cellular counters count events by expressing a reporter gene, mainly GFP, only after a certain number of pulses of an inducer.[5] Counters are found naturally in systems such as telomere lengthening, and can be applied to tightly control processes like cell growth. Friedland et al constructed two types of synthetic genetic counters that can count up to three. 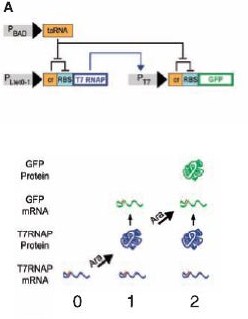 RTC synthetic gene counters can possibly be used to program cell death after a set amount of cell divisions; this can be very useful in containment of bioengineered cell strains. 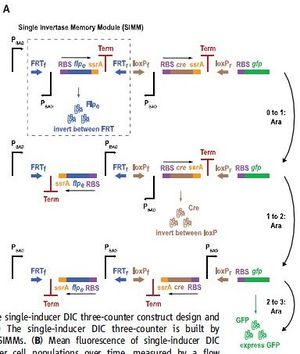 The DNA invertase cascade (DIC) system uses a single invertase memory module (SIMM) to count.[5] An SIMM refers to a set of genes located between forward and reverse recombinase recognition sites. These genes include, in order, and inverted promoter, a recombinase gene, an ssrA tag for protein degradation, and a transcriptional terminator. An upstream promoter of the recombinase gene is turned on by a pulse of its inducer, usually arabinose; this promotes the expression of the recombinase which inverts the entire DNA region between the forward and reverse recombinase recognition sites. Once the SIMM is inverted, the upstream promoter can no longer promote the recombinase expression, and the inverted promoter is now in the right orientation to promote the next SIMM in the cascade at the next arabinose pulse. The number of SIMMs in the cascade determines if the system is a two-counter or three-counter. The last pulse in the cascade promotes GFP expression. 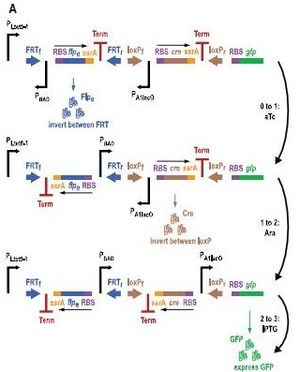 A multiple inducer DIC was also designed in which the three arabinose promoters are replaced with three different promoters such as one induced by aTc, one induced by arabinose, and the third induced by IPTG.[5] High GFP expression is only seen when the three inducers are pulsed in that order. This allows a circuit to respond to a chosen sequence of events.

The ETH Zurich iGEM team created a counter using toggle switches as part of their project.