The ‘Spinach’ aptamer is a short RNA sequence recently developed in the lab of Samie R. Jaffrey (lab website) at Cornell University. The aptamer is capable of mimicking the fluorescence properties of EGFP (Enhanced Green Fluorescent Protein) when in complex with its ligand. Spinach derives its name from the bright green color of fluorescence and its potential utility. Fluorescence is actually a property of the aptamers ligand, which is strongly and specifically induced by specific binding of the aptamer [1].

While the benefits of GFP for studying proteins are obvious to anyone working in the various fields in biology, no analogous tool has ever been developed or discovered for RNA. Despite this, various methods have been developed for visualizing RNA, including in situ hybridization, molecular beacons, and aptamers to organic dyes. These methods have pitfalls as diverse as their mechanisms, making obvious the need for a visualization system analogous to GFP.

During structural maturation, the Green Fluorescent Protein (GFP) chromophore is formed by the covalent cyclization of three amino acids (Ser65-Tyr66-Gly67) to form a molecule known as 4-hydroxybenzlidine imidazolinone (HBI). This chromophore is the actual fluorescent module of GFP, excitation and emission of which is strictly mediated by non-covalent contacts with the rest of the protein backbone [2]. 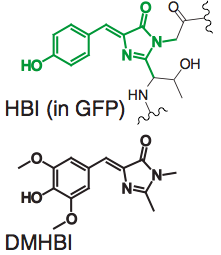 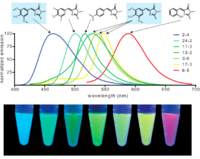 Fluorescence properties of several chromophore-aptamer complexes. Second from the left in the graph and tubes is Spinach-DFHBI. [1]

Paige et al reasoned that a similar stategy could be tried using aptamers, and were able to synthesize a small molecule analog of HBI, which they termed dimethoxy-HBI (DMHBI). They then reasoned that aptamer selection for RNAs that would bind the small molecule may produce sequences capable also of mediating its fluorescence . To this end, they performed several rounds of Systematic Evolution of Ligands by EXponential Enrichment [3] and were able to select several aptamers capable of binding and inducing fluorescence in a range of colors [1].

Most GFP used today in laboratory studies is a variant known also as Enhanced GFP (EGFP), which has been modified so the HBI molecule remains in the phenolate (deprotonated) state, as oppsed to wtGFP, in which the phenol (protonated) state is dominant. This slight modification allows for several advantageous properties, including increased brightness and quantum yield [2]. To simulate this state, Paige et al synthesized difluoro-HBI (DFHBI), and performed further SELEX experiments. At least one other aptamer was identied, which displayed characteristics remarkably similar to EGFP when in complex with DFHBI. They termed this aptamer “24-2”. The group performed further analysis of the sequence properties of 24-2 to produce a minimized version, 24-2-min, which was termed “Spinach” [1].

Despite all selections for Spinach being done in vitro, the major utility of a GFP-like system for RNA visualization is in vivo study. Paige et al first expressed Spinach in E. coli under control of a T7 RNA polymerase promoter, providing robust expression. Cells expressing Spinach and incubated with DFHBI show marked fluorescence compared to the control cells. Further, Spinach was fused to the end of a 5S ribosomal RNA expression construct transfected into human cells, and again cells expressing the aptamer and incubated with DFHBI showed fluorescence. This fluorescence could be monitored in real-time, and changes in induction of 5S expression and transport could be monitored under multiple conditions [1].

Utility and Difficulties of Spinach

For the first time, Spinach provides a robust and conceptually familiar tool for studying RNA in a system analogous to GFP. It remains to be seen whether it will bring about the same revolution in RNA study as GFP did for protein; much of this depends of proper testing and further development of useful techniques, which is not without difficulty.

Currently, Spinach is expressed in vivo fused between two halves of a tRNA, replacing the anticodon loop. This is a previously described method for stabilizing exogenous structured RNA [4]. While this fusion is made to aid in stability, it also has the added pitfalls of increasing overall size of the sequence and added uncertainty as to recognition by tRNA processing machinery. To mitigate this concern, a tRNA from a divergent species can be used, although it may be desirable to develop a way to remove the tRNA halves altogether.

Spinach in its current form exhibits many spectral properties similar to EGFP. This is beneficial for many reasons, including the fact that appropriate filters and excitation lights are widely available, along with other available tools for using EGFP. Not all properties are similar, however. Spinach is extremely resistant to photobleaching, presumably due to rapid dissociation-reassociation with the DFHBI. While this has beneficial effects, it also removes the possibility of doing useful studies involving intentional photobleaching, although the ligand-aptamer binding can perhaps be taken advantage of to develop something similar. Its fluorescence also occurs much faster after synthesis than GFP (presumably immediately). Finally, and perhaps most importantly, Spinach has only about half of the brightness of EGFP. This, combined with the fact that most coding RNAs are orders of magnitude less abundant than their protein counterparts, dampens the initial utility of Spinach until useful methods have been identified to rectify this limitation.

Although the development of Spinach opens many doors, its success as a useful tool for molecular biology is not guaranteed. Further methods must be developed to take advantage of the many properties of Spinach, and to further probe its limitations.